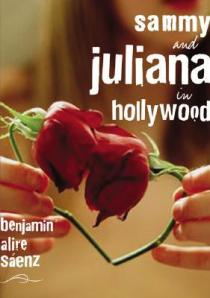 DESCRIPTION FROM THE BOOK JACKET: A young adult novel Latino-style–the year is 1969. America is at war, Hollywood is a dirt-poor Chicano barrio in small town America, and Sammy and Juliana, about to head into their senior year, are in love.

MY TWO CENTS: Sáenz creates strong main and supporting characters long remembered after finishing the novel. Sammy’s voice was spot-on as a teen boy who grapples with the personal issues all teens do–friends, love, fears and hopes for the future–while also dealing with poverty, racism, and the Vietnam War era. Sáenz brilliantly mixes Spanish and English, local “neighborhood” issues with larger social issues like drug addiction and homophobia. While Sammy and Juliana are in love, as the book blurb states, this is not a traditional love story. Something tragic happens shortly into the novel that ends the love affair. I won’t spoil it, but the relationship was short-lived, and Sammy spends the rest of the novel dealing with this loss and many others. If you’re looking for something light-hearted with a happy ending, this one’s not for you. Sáenz left me feeling what it’s like to get pounded by life, as Sammy was and as many people are.

TEACHING TIPS: This book has many issues worth pursuing in the classroom: immigration, poverty, grief, drug-use, discrimination based on race and sexual preference. Parts of this novel could easily be used by teachers in different ways. I say parts because I don’t believe every novel used in class needs to be read cover-to-cover. A history teacher, for example, may want to zero in on certain aspects of a novel, but may not want to handle elements typically taught by an English teacher, like character development or symbolism.

The thread about the Vietnam War could be pulled from the novel and used to complement nonfiction pieces in high school history classes. The character Pifas is drafted and students protest the war by wearing black arm bands and staging a sit-in in the school cafeteria. These were among the most memorable moments in the novel. The conversation between Sammy and Pifas about being drafted is emotionally gut-wrenching, and my heart sank when Gigi gets out of the car and falls to her knees in reaction to news about Pifas.

English teachers could use nonfiction pieces about any of the novel’s issues to attack author’s craft, investigating the differences between an objective, factual version of events versus a fictionalized one. Students could then choose an issue from the novel that is still relevant today (hint: all of them) and write two short versions of an event, one as a nonfiction writer would and the other as a fiction writer would.

Benjamin Alire Sáenz was born in 1954 in Old Picacho, a small farming village outside of Las Cruces, New Mexico. After graduating from high school in 1972, he entered the seminary. He was later ordained a Catholic priest, but left the priesthood three and a half years later. At the age of 30, he entered the University of Texas at El Paso. He later received a fellowship at the University of Iowa. In 1988, he received a Wallace E. Stegner Fellowship in poetry from Stanford University. In 1993, he returned to the border to teach in the bilingual MFA program at UTEP.

Sáenz is an award-winning poet and author of books for children and young adults. His first YA novel, Sammy & Juliana in Hollywood was a finalist for the Los Angeles Times Book Prize and won the Americas Book Award, The Paterson Prize, and the JHunt Award. It was named one of the top ten Young Adult novels by the American Library Association and one of the top books of the year by the Center for Children’s Books, The New York Public Library, and the Miami Herald.

His other YA novels are:

3 comments on “Book Review: Sammy and Juliana in Hollywood by Benjamin Alire Sáenz”