Or, what does that even mean?

Brace yourselves. Here’s another blog post on the lack of diversity in YA. When we bring up these topics the common words I see are FEAR, UNCOMFORTABLE, GUILT.  If a white person brings up the subject then, “who are they to talk about it?” If a POC does it, we’ll be seen as a bunch of angry people. So, Catch 22. I get it. Writing these posts is HARD, but they should be written. Recently one of my favorite authors ever, Jenny Han, tweeted about diversity in YA. The thing is, we need to feel uncomfortable, and like Jenny said, “that’s the risk.”

Here’s what you need to know about me. I was born in Ecuador. I moved to Queens, NY when I was 6. Being in America for 20 years makes me American. My public school experience is American. Yet, when people look at me and hear me speak, they are perplexed. Why? You got me.  The “Your English is so good!” “What are you?” “My friend is from Ecuador, do you know LUIS PABLO ESTEBAN SANTIAGO?” Spoiler alert: I don’t.

This difference wasn’t apparent to me from the beginning. Between grades 1-4, I was in bilingual classes. (My Little Mermaid Spanish didn’t get me to the top of the class right away.) All of my classmates had either emigrated from a Latin American country or had Latin American parents. Salvadorian, Peruvian, Puerto Rican, you name it. Guess what, we spoke English. We listened to the Spice Girls. We cut up our bangs like Lindsay Lohan in The Parent Trap. We watched TRL and taped the music videos. We learned the awesome moves to Christina Aguilera’s Genie in a Bottle (She’s half Ecuadorian, BTW). At home, sometimes I’d eat Chef Boyardi ravioli, sometimes I’d have rice and steak and beans.

So when I got to 5th grade, I was placed into the “regular” kids class. English only. Suddenly my friends also included Guyanese, Jamaican, African-American. Guess what, we still listened to shitty New 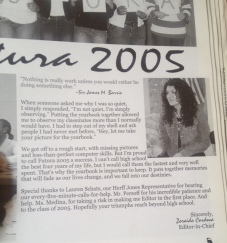 Junior high school and high school were also the same thing. Look at all the shades of brownness! Here are some pictures from my high school yearbook. Spoiler alert: I am still a nerd.

My experience growing up in neighborhoods that are already diverse gives me a different perspective. Could I have used more diverse characters in my current books? Yes. My trilogy centers around a white merman from Brooklyn. His love interest is mixed. His friends are mixed. Merpeople in my world come in all shades. But the answer is still yes. You can always add diverse characters into your books. 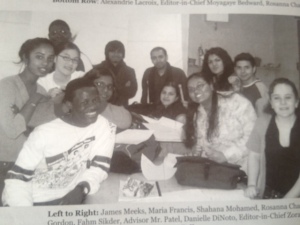 If your character is Nuyorican, then you’d have to do more research. Stereotypes need not apply. Because, here’s a little known secret, not all Latin experiences are the same. No matter where we were born, when we immigrated, where we were raised, we can’t be lumped into the same experience. This is not to say that every YA author should write a novel about how hard it is to grow up being brown, because I did it and my adolescence was pretty “average.”

If you’re writing a fantasy/sci-fi novel and there is not a single non-white person to be found, then my only question is “how come?” Here you have a chance to create a whole new world, where our carefully constructed American ideal of white-only beauty need not apply. When I read YA fantasy novels and the only time race is mentioned is when a new character comes in and has “chocolate” or “earth colored” skin, I just cringe. This mean everyone else I’ve been reading about is white. Not only is that lazy writing, it’s a limited way of thinking about a world that is supposed to be fantastical.

So how do we fix this? Well, lets talk about it. Let’s be friends. Reach out to someone who has a different experience as you. READ. I  to this date have yet to read a YA about a teenage Ecuadorian girl. Not even a slice of life story about a girl who falls in love and there’s a nice cover of them at the beach, or lying down on a lawn. I am, however, excited about Diana Renn’s upcoming YA thriller Latitude Zero. The book takes place in Boston and in Ecuador. Diana is not Ecuadorian, but she wrote an exciting novel with diverse characters. She reached out and did her research. 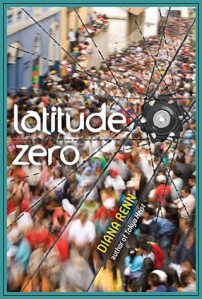 There is a difference between being afraid to write about a culture that is not your own, and consciously creating a two dimensional stereotypical character. 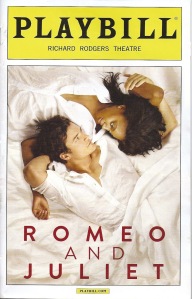 One of my favorite retellings of Romeo & Juliet is the most recent one on Broadway, partially because Orlando Bloom is shirtless but also because Juliet is black. They aren’t divided because of their skin color. This isn’t West Side Story. It’s not that one is brown and from the wrong side of the tracks, and the other one is nice and white, so they can’t be together. This is a story of feuding families that have been feuding so long they can’t even remember why or how it started. It’s that simple.

If you’re worried you’re still propagating a stereotype, then reach out. You’ll make a friend. You’ll learn something new. I am extremely lucky to have had diverse friends. I know that’s not the case for everyone and I know that if you’re not in a big city, chances are the POC in you neighborhood are marginalized. I’m not in Arizona where they’re trying to wipe out Mexican studies. I’m not in a tiny town in Ohio where there is one black kid in the class. I’m in NYC, which isn’t perfect and has a history of putting away their low income minorities to make room for gentrification. But my eyes are extremely open (and I got new glasses today) as to the future we need to create for Young Adult literature. It’s a team effort.

Maybe if we keep making it a point, when we talk about diverse characters in the coming years, it will be more than just a trend; it’ll be the new norm.

*** Representation of Latin@s in media has been a personal focus for me.  This is not to say that “diversity” to me means only adding Latin@s to literature. The conversation extends to all marginalized people. Like I said, lets talk about it.