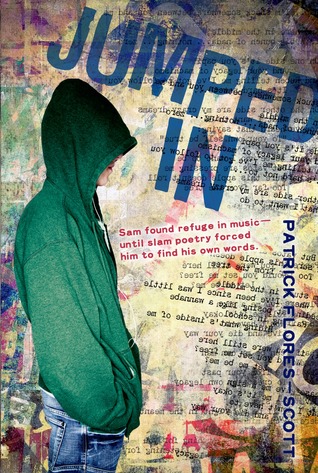 DESCRIPTION FROM THE BOOK JACKET: Sam has the rules of slackerhood down: Don’t be late to class. Don’t ever look the teacher in the eye. Develop your blank stare. Since his mom left, he has become an expert in the art of slacking, especially since no one at his new school gets his intense passion for the music of the Pacific Northwest—Nirvana, Hole, Sleater-Kinney. Then his English teacher begins a slam poetry unit and Sam gets paired up with the daunting, scarred, clearly-a-gang-member Luis, who happens to sit next to him in every one of his classes. Slacking is no longer an option—Luis will destroy him. Told in Sam’s raw voice and interspersed with vivid poems, Jumped In by Patrick Flores-Scott is a stunning debut novel about differences, friendship, loss, and the power of words.

MY TWO CENTS: Sam is a teen who once had much going for him but has decided to give up on everything after his mother dumps him with her parents and leaves. Sam now wants to also disappear by becoming a slacker. He’s got the slacker rules down pat and he follows them quite well until the new guy, Luis, is assigned to sit near him in every single class. Everyone assumes Luis is a gangster; after all, his brother is.

Flores-Scott writes to teach the power of words and the obliterating effect of silence. Sam finds comfort in the music of Nirvana. His sadness is echoed in the gray, wet landscape that surrounds him in Seattle. The humor and optimism of his grandparents emphasize what a jerk Sam is becoming. Luis appears in poetic form and he while he really isn’t much more than a thought, a poem in the story, his presence changes Sam. We never really know what’s going on in young people’s minds, do we? Flores-Scott captures their inconsistencies as he writes about so many characters who seem one way but act another. Rupe and Dave were Sam’s touch stones, but even they grew and changed in ways Sam wasn’t quite prepared for.

The writing will attract students who don’t often find themselves in books, those who try to disappear as well as those who are fascinated by the power of language. Some of the short chapters themselves look like poems. I wanted to slow down the story and clean up the ending. I wanted the parrot to go ahead and scream “goodbye Sam” and for Sam to be OK with that. I wanted to add “Trayvon” to the graffiti on the cover because that young man in the hooded green jacket reminds us all how our young boys in hoodies too often disappear.

Jumped In was listed on YALSA’s 2014 list of Best Fiction for Young Adults and as a Favorite Chapter Book by the International Reading Association.

AUTHOR: Patrick Flores-Scott was born and raised in the Snoqualmie Valley (just east of Seattle). He studied theatre at the University of Washington and ended up getting a teaching certificate as well. He spent years working as a reading specialist by day while writing and acting in plays in his free time. While teaching at a middle school in Des Moines, Washington, he was inspired to write a novel that reflected his students’ lives, something that his struggling readers would able to enjoy, something he might have enjoyed all the years he was a struggling reader. Jumped In is his debut novel. He lives in Seattle with his wife and two children.

Edith Campbell is a mother, librarian, educator and quilter. She received her B.A. in Economics from the University of Cincinnati and MLS from Indiana University.  Her passion is promoting literacy in all its many forms to teens and she does this through her blog, CrazyQuiltEdi and in her work as an Education  Librarian at Indiana State University in Terre Haute, Indiana. Edith currently serves as the IN State Ambassador for the United States Board on Books for Young People and is a past member of YALSA’s Best Fiction for Young Adults selection committee.

3 comments on “Book Review: Jumped In by Patrick Flores-Scott”