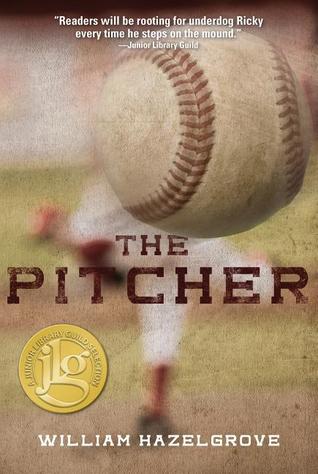 The first question I get is usually: “How could you write in the voice of a thirteen year old Latino boy?” I am about as far as you can get culturally from a young adult Latino just barely hanging on with his mother. But of course, if you are a writer, you are so many people that biographers will never get it straight. It is the same way I wrote in the voice of an old African American man in Tobacco Sticks and in Mica Highways.Voice is everything. Once you have the voice you have the novel. When I started The Pitcher, I wrote it in third person but quickly realized it would not work that way. It was boring and distant. So I started over and I knew it had to be first person, but who would tell the story? The old pitcher? The mother? No. The boy, Ricky would tell the story. And so I started to play around with his voice. Then I wrote one paragraph:

I never knew I had an arm until this guy calls out, “Hey, you want to try and get a ball in the hole, sonny?” I am only nine, but Mom says, “Come on, let’s play.” This carnival guy with no teeth and a fuming cigarette hands me five blue rubber balls and says I throw three in the hole, then we win a prize. He’s grinning, because he’s taken Mom’s five bucks and figures a sucker is born every minute. This really gets me , because we didn’t have any money after Fernando took off, and he only comes back to beat up Mom and steal our money. So I really wanted to get Mom back something, you know, for her five bucks.

And I had Ricky then. I had the novel. And where that voice came from is anyone’s guess. Maybe it is that kid who messed around in Baltimore City where I grew up. Maybe it was some of the Mexican guys I worked with in security. And the hard times Ricky and his mother go through are my own hard times. And the baseball is my son’s baseball and the coaches and parents are from nine years of being an assistant coach with my son. The immigration issues are from our time.

When I was thinking about writing The Pitcher, I was reading what was going on in Arizona at the time with immigration and the whole stop and ask people for their papers to deport them back to Mexico. When I wrote the mother character Maria I wanted her to have the same outrage that I felt reading about this practice of stopping people and demanding to see their papers. I wanted her to draw the conclusions that this was fundamentally un-American and I wanted her son Ricky to pick up on that especially since he was facing off with a Tea Party mom and her son.

Culturally, I knew Ricky because I know how it feels to be an outsider and to have all the odds stacked against you. Ricky’s dream of becoming an MLB pitcher is my own of becoming a novelist against immense odds.

Then again, maybe it was just Ricky flying around out there waiting to be born. But when The Latina Book Club made it their Monthly Selection or LatinoLA did a story on the immigration issues in the book or I stand up on a stage at the Latino Book Festival in Chicago and read my book that has to be translated to Spanish so the audience can understand what I am saying is…even I wonder how a I came to write a Latino novel. I guess I just did.

William Hazelgrove is the author of five novels, Ripples, Tobacco Sticks, which hit the National Bestseller List, Mica Highways, Rocket Man and The Pitcher. He was the Ernest Hemingway Writer in Residence where he wrote in the attic of Ernest Hemingway’s birthplace. He has written articles and reviews for USA Today and other publications. He has been the subject of interviews in NPR’s All Things Considered along with features in The New York Times, LA Times, Chicago Tribune, and the Chicago Sun Times, among others. His most recent novel, The Pitcher is a Junior Library Guild Selection. He runs a political cultural blog, The View From Hemingway’s Attic.