Graffiti mermaid at the Lola Starr store in Coney Island

Welcome as we kick off our LATIN@S IN SCI-FI & FANTASY MONTH!

After the release of my first book someone told me that mermaids were cool and all, but I should write about my own “experience.” I remember the words more than the guy who said them to me. Now, I believe that fantasy stories are a great metaphor for coming of age. I have a 16 year old dude who turns into a merman and the first thing he worries about is how his body changes (typical boys). In Blood and Chocolate, the very sexy werewolf is a metaphor for the changes girls go through when they menstruate. Hell, watch the first three seasons of Buffy the Vampire Slayer for stories that are magic, but still mirror “normal” teenage coming of age.

But when this guy told me all these years ago to write about my “experience,” he wasn’t talking about coming of age, he was talking about my immigrant experience. Some time ago, I put out a question to Twitter for links to Latin@s writing YA fantasy, and I got back “Have you read Isabelle Allende’s YA series?” (She is a BAMF in her own right, but still). While I love contemporary stories, and I think it’s important to read all kinds of narratives that show how different each Latino experience is in the U.S., the stories I want to write are about magic.

I grew up listening to my grandmother sing to me. I grew up reading fables and getting scared of el Cuco and la Llorona. When I started writing The Vicious Deep trilogy, I knew I was writing a book that had been brewing in my head for years. For a long time when people remarked “You speak English so well,” I would respond with “All I did as a kid was watch The Little Mermaid,” so that’s how I learned to speak English. It’s true, I watched it every day, rewinding the VHS as soon as Ariel got her happy ending. Whether or not it was my vehicle for the English language is debatable, but it’s become part of the story I tell.

I’ve always been drawn to magic and magical things. I want to believe in magic, and the way that I can show that is through creating magical worlds. When I was in high school my favorite books were about vampires and witches and dragons. It was book browsing at a B&N with a friend that pushed me to really write about mermaids. The conversation went something like this:

Me: I can’t find a mermaid story that I really love.

Him: So write one.

THAT’S IT. I listened. I took a notebook with me to the beach (Coney Island, obvs) and this story LITERALLY poured out of my head. (Two points from Ravenclaw for improper use of “literally.”) 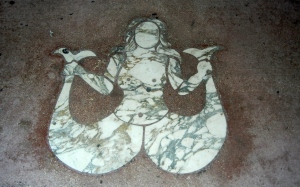 Mermaid on the ground in South Beach.

If you don’t see the story you want to read on the shelves, write it. Mermaids have always been magical to me, but it wasn’t until someone else pointed it out that I realized I could add my own mythology to my favorite magical creatures. Lately, we’ve been talking about diversity a lot, and I think the same thing applies to that. You don’t see yourself represented? Write your own story. If you want to write about magical ponies that travel through time, do it. If you want to write about the story of a girl who is looking for summer romance, do that, too.

I wonder if the reason there aren’t more Latin@s writing as much SF/F is because people (like that dude mentioned earlier) assume that the only story we have to tell is one of immigration or assimilation. And that’s just not so. If you check out this list from Cosmopolitan of 5 Latina YA authors to look out for, all of these stories fall in SF/F category. And if you go to Diversity in YA, they have an awesome list of just some Latin@s (authors and/or characters) in SF/F.

Tomorrow is the launch of the third book, The Vast & Brutal Sea.  I want to share some images of mermaids around town. I asked the lovely ladies of Latin@s in Kid Lit (and some from Twitter friends) to snap photos of mermaids if they happen upon them: 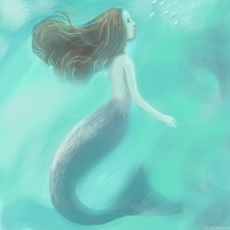 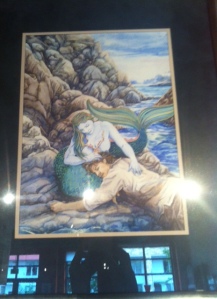 The Sagamore Hotel in South Beach 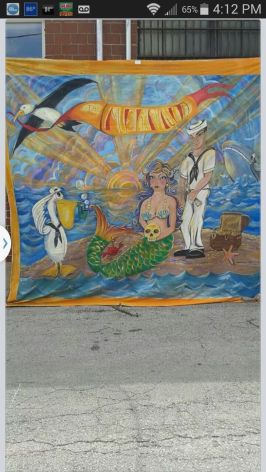 A friend sent this to me. Art by Paul Webb from St. Louis.

And now from my apartment, the Chateau Mer-mont:

My bookend…not holding up any books. 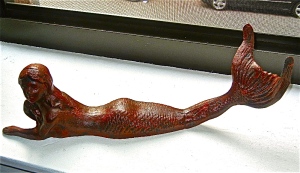 My fancy mermaid being fancy

I hope from now on you’ll start seeing mermaids everywhere. For now, follow my blog tour over at www.zoraidacordova.com I hope you enjoy the rest of our SF/F month!