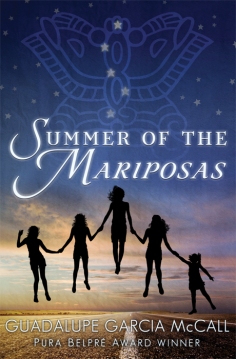 DESCRIPTION FROM THE PUBLISHER: When Odilia and her four sisters find a dead body in the swimming hole, they embark on a hero’s journey to return the dead man to his family in Mexico. But returning to Texas turns into an odyssey that would rival Homer’s original tale.

With the supernatural help of ghostly La Llorona via a magical earring, Odilia and her little sisters travel a road of tribulation to their long lost grandmother’s house. Along the way, they must outsmart a witch and her Evil Trinity: a wily warlock, a coven of vicious half-human barn owls, and a bloodthirsty livestock-hunting chupacabras. Can these fantastic trials help Odilia and her sisters prepare for what happens when they face their final test, returning home to the real world, where goddesses and ghosts can no longer help them?

Summer of the Mariposas is not just a magical Mexican American retelling of The Odyssey, it is a celebration of sisterhood and maternal love.

MY TWO CENTS: Summer of the Mariposas tells the story of a road trip full of apparitions and supernatural interventions. Several elements of this novel caught my attention, beginning with the fact that it’s patterned after The Odyssey, yet is steeped in Mexican culture and mythology, including Aztecan figures and language.

Although mythical beings show up on a regular basis, the plot is grounded in the everyday life of a middle-class Texas family. The main characters are a lovable collection of cinco hermanitas, the Garza sisters, ages ten to fifteen. The first-person narrator is Odilia, the oldest sister, who with lots of prodding from her siblings—not to mention whispers from La Llorona—gets behind the wheel of a rusty car, bound for El Sacrificio, Mexico. There’s a dead body propped up in the backseat, next to the thirteen-year-old twins. The girls found the dead man floating in the Rio Grande, near their home in Eagle Pass, Texas. His wallet provides an address. A plastic bag in his boot contains enough cash to fund the girls’ self-appointed errand to keep him from the impersonal burial afforded the undocumented. Meanwhile, the girls’ mother is at work, blissfully unaware of her daughters’ border-crossing adventure. They expect to return home before she notices they’re gone. What could possibly go wrong? Plenty. But lovers of fantasy fiction wouldn’t have it any other way.

Guadalupe weaves in an array of fascinating details. Each chapter highlights a Lotería card and the riddle that goes with it. The Garza family used to play this popular Mexican game while their father was still around.  Odilia recalls that during one game, he held up the mermaid card and announced that La Sirena was “‘la mujer who wants to take your Papá away.” Prophetic words? Or was Papá already feeling the lure of the siren song? He abandoned the family a year before the story begins, and no one knows where he is now. The father’s disappearance is the heartache that throbs beneath the fantastical turns of the story. Along their journey, the girls acquire down-to-earth perspective and fortitude. It takes a series of supernatural encounters to bring these lessons home, but don’t discount more pedantic challenges, such as grueling travel conditions and hard knocks brought about by impetuous choices.

Summer of the Mariposas is a traditional prose novel, but Guadalupe’s command of poetic conventions is in full evidence. Sometimes she soothes with lyrical passages. Sometimes she unleashes horror:

“[The lechuzas] soared over us, ranting and raving and angrily flapping their wings. They circled and circled, creating a whirlwind, a dirt devil of debris and dark moldy hay that swirled all the way up to the ceiling. The miniature storm swirled and stood before us like a charmed snake, flicking our hair into our faces, wrapping it around our necks, choking us—stealing our breaths.”

I highlighted that paragraph with a note to self: “Nice writing!”

TEACHING TIPS: The publisher, Lee & Low Books, provides teaching material for Summer of the Mariposas on its site. A mythological glossary, which outlines parallels to The Odyssey and includes background information on the Aztec figures, is a fascinating read. You can also find discussion questions, a link to an educator guide by the blog Vamos a Leer and a book talk by the author.

Has it been a while since you read Homer’s The Odyssey? For a fun synopsis, check this cartoon presentation.

Here is a helpful summary of Tonantzin, the Aztecan deity which figures in this novel, and her connection to the Virgin of Guadalupe.

By all means, check out our interview with Guadalupe, right here on Latin@s in Kid Lit!

AUTHOR: Guadalupe Garcia McCall is the author of Under the Mesquite (Lee & Low Books), a novel in verse. Under the Mesquite received the prestigious Pura Belpre Author Award, was a William C. Morris Finalist and received the Ellen Hopkins Promising Poet Award, the Tomas Rivera Children’s Book Award, and was included in Kirkus Reviews’ Best Teen Books of 2011 among many other honors and accolades. Her second novel, Summer of the Mariposas (Tu Books, an imprint of Lee & Low Books), won a Westchester Young Adult Fiction Award, was an Andre Norton Award for Young Adult Science Fiction and Fantasy Finalist, and was included in the 2013 Amelia Bloomer Project List, the Texas Lone Star Reading List, and the 2012 School Library Journal’s Best Books of the Year.

Her poems for adults have appeared in more than twenty literary journals across the country and abroad, and her poems for children are included in The Poetry Friday Anthology, The Poetry Friday Anthology for Middle School, and The Poetry Friday Anthology for Science. Ms. Garcia McCall was born in Piedras Negras, Coahuila, Mexico. She immigrated with her family to the United States when she was six years old and grew up in Eagle Pass, Texas (the setting of both her novels and most of her poems). She is currently a high school English teacher in the San Antonio area and lives in Somerset with her husband, Jim, 2 dogs (Baxter and Blanca), 1 cat (Luna), and her two (of three) college age sons, Steven and Jason.

FOR MORE INFORMATION ABOUT Summer of the Mariposas, visit your local library or bookstore. Also check out worldcat.org, indiebound.org, goodreads.com, amazon.com, and barnesandnoble.com.

4 comments on “Book Review: Summer of the Mariposas by Guadalupe Garcia McCall”