Sometimes when I look in the mirror, I see my grandma. Especially now that I have shorter hair, because as long as I knew her, she wore her hair short. Strangely, it wasn’t until a few years after she died that I noticed the resemblance between us.

She was short, too, like me—I’m the shortest in my family at (barely) 5’3”. We both have round faces and eyes that crinkle into small slits when we smile.

Now, years after her death, years after I’ve forgiven her for not telling me how bad her cancer really was, I wish I’d talked to her more. I know only snippets of my grandma’s life growing up in Colorado during the Great Depression. She was the youngest girl of 16 children, the second youngest altogether. Her parents were Joseph and Josephine Herrera. (On a baptismal document I found in my grandma’s things, their name was misspelled as Herreda.) And though she told me she’d left home at a young age, family was clearly very important to her, if the dozens of photo albums she left behind were any indication.

When my siblings and I were younger, Grandma told us a story of our uncle Chris (Christobel). One night, near midnight, he was driving across a long bridge. Halfway across, he glanced over at the passenger’s seat to see a woman, dressed all in white, sitting there. She had her face turned toward the window, and Uncle Chris could see her shoulders shaking as she sobbed softly. He reached out a hand to comfort her, but before he could touch her, he looked down at her hands, in her lap. They were skeleton hands.

Though Chris was terrified, he kept driving. Somehow he knew that if he could make it to the other side of the bridge, the ghostly woman would disappear. He drove faster and faster, but out of the corner of his eye he saw the woman slowly turning her head to face him. Chris knew what her face would look like. It would be a skull, and if he looked, he would die. So he kept his eyes forward and kept driving until he crossed the bridge. Only then did he dare look at the passenger’s seat and see that the woman had vanished.

Grandma called the woman La Llorona. I didn’t know until later that La Llorona was a common Mexican folktale, and that Grandma’s tale was just a version of it. But for a long time, I was terrified of La Llorona, and impressed that my uncle Chris had been smart enough not to fall victim to her.

This is one of the few ties to my Mexican heritage that I have. I remember other things, too, like making tortillas on Grandma’s tortilla press, then heating them up and smothering them in butter. When my aunt Lupe visited, she and Grandma would occasionally lapse into Spanish, spoken so quickly that I’d sometimes stand in the kitchen with them, listening in awe. (I’m terrible at learning other languages.) Aunt Lupe, more than Grandma, always called me mija. I didn’t know what it truly meant until I looked it up in college, but I knew it was a term of endearment, because she used it on all the grandkids (mijo for the boys).

When my Grandma died, I felt like I’d lost that last connection with my Mexican heritage. My dad had already died by that point, but he was biracial and, I think due to circumstances in his childhood I can’t ask him about, wasn’t fluent in Spanish. Aunt Lupe is gone now, too, or I would talk to her about my grandma and their childhood together. (Though I’m not sure she’d tell me the truth. Grandma probably wouldn’t have either, to be fair.)

Now, as a writer, I miss my grandma terribly. I like to think she’d be proud of me, and that she’d see a bit of herself in my book, though to my knowledge, she never lived in a trailer park. What I hope she’d see is a portrait of a poor family, flawed but, for the most part, happy. Because that is what I remember most about my grandma. She showed me how to be poor.

Like the characters in my book, we shopped at thrift stores for most of our clothing (and dishes, and various housewares). Every week Grandma went grocery shopping at the local Grocery Outlet, which we called the Canned Food Store, and picked up what was on sale. When she died, her cupboards were still stocked with about a hundred different cans of food. She made sure we never went hungry.

But more than anything, she taught me that being poor wasn’t a terrible thing. I didn’t even begin to realize that I was poor until late in high school, after a conversation with my sister. This will sound cheesy, but Grandma made me feel rich in other ways.

I wonder, sometimes, where I get my love of writing and making up stories. My mother went to school for art, so for a long time, I thought that might be it. But I think it came from my grandmother, who told me stories (though often embellished) of her childhood (and ghost women) from an early age. I’ll leave you with one of my favorites, which she would often tell as a joke if I asked for a story. Of course, you have to imagine it’s being told by a short, round-faced Mexican woman who is being as over dramatic as possible: 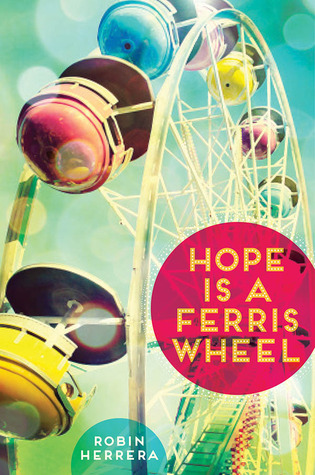 Robin Herrera was born in Eureka, California. She has degrees from Mills College and Vermont College of Fine Arts. She now lives in Oregon. Her debut novel, Hope Is A Ferris Wheel, was published in 2014 by Amulet Books.