Clementine has spent her whole life preparing for her sixteenth birthday, when she’ll be tested for Extraction in the hopes of being sent from the planet Kiel’s toxic Surface to the much safer Core, where people live without fear or starvation. When she proves promising enough to be “Extracted,” she must leave without Logan, the boy she loves. Torn apart from her only sense of family, Clem promises to come back and save him from brutal Surface life.

What she finds initially in the Core is a utopia compared to the Surface—it’s free of hard labor, gun-wielding officials, and the moon’s lethal acid. But life is anything but safe, and Clementine learns that the planet’s leaders are planning to exterminate Surface dwellers—and that means Logan, too.

Trapped by the steel walls of the underground and the lies that keep her safe, Clementine must find a way to escape and rescue Logan and the rest of the planet. But the planet leaders don’t want her running—they want her subdued.

With intense action scenes and a cast of unforgettable characters,Extraction is a page-turning, gripping read, sure to entertain lovers of Hunger Games and Ender’s Game and leave them breathless for more.

MY TWO CENTS: The world in Extraction is exactly what we (I) fear: pollution has rendered life on the surface practically inhabitable. Here, a shield keeps the lethal acid from the moon from penetrating the surface of the planet Kiel. (The acid is called Moonshine, which really tickled me, btw.) The layers of civilization are Surface, Crust, Mantel, Layer, and Core. While the poor and young live on the Surface and other layers, working till they’re dead or Extracted from this life, the rich have found a way to live in the Core of the earth. Extraction weeds out the intelligent and obedient (key word) hopefuls that could be of better use to Core society. I was instantly drawn into the idea of fearing the sky. Imagine living every day fearing that the heavens are going to rip open and the Moonshine is going to come pouring down on you? Add that with extreme levels of hunger, poverty, and strenuous physical labor, and you’ve got the same problems as Clementine, our narrator.

As Clementine faces Extraction, she also faces the difficult choice that comes with leaving the person you care about. Here, Diaz creates not just a romance, but a love that is rooted in hardship and loneliness. Logan isn’t the typical YA paramour. He’s not just there to rescue her. She does everything she can to save him, which is refreshing. While Clementine wants to stay on the surface with Logan, her options are limited. She could stay and be worked until she dies at 20 because of population control. She could become a breeder, which is part of the initiative to replenish the surface workers. There are so many ways that Clementine could die, but being Extracted means the chance to live. 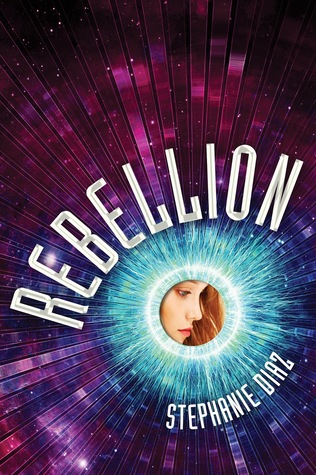 One of the most poignant passages was when Clementine was waiting to see if her name was selected. It had the feel of the reaping in Hunger Games, but while in the HG the selection is random, in the Extraction, each person is selected by this benevolent Core commander. I loved that Clementine did feel torn in a very human way. Going into the unknown, even if the unknown promises a better life, is extremely terrifying. There’s Logan, and then there’s a better life. There’s Logan, and then there’s the feeling that you don’t want to die. And as Clementine kept saying that she didn’t want to die, I appreciated that she allowed herself to be just a little bit selfish. It’s self-preservation.

And in a world where the odds are against you, you have to have a lot of that.

But, the Core utopia isn’t what it seems. Even though the novel is often pitched as dystopian, it should be recommended as straight up science fiction. Stephanie Diaz has woven a world that is nothing like ours. There are humans, and a deeply corrupt government, but they’re in space. There are lasers. There are ships. There is evolved medicine. There is cool slang. As in, Clementine is a vruxing cool heroine. As I watched her journey start from wanting to escape a terrible life, to wanting to do anything to get top marks in all her trials, to her realization that there is something galactically wrong going on in the Core, I found myself rooting for her despite all the obstacles stacked against her. I will add a trigger warning for the threat of sexual assault from a villain in the book. The girls in the Surface had to endure terrible threats, and in the Core, just because it’s clean and supposedly civilized, doesn’t mean that it’s actually safe. However, Clementine is never a victim. She makes it clear to her biggest foe that she is smarter and better. It’s that defiance that prevents someone like Clementine from bowing down blindly to Core society.

Utopia comes at the loss of individual freedom. At least it does in Kiel. In Extraction, Diaz creates a dynamic heroine, a fast-paced plot, and secrets that unravel with every page. Rebellion is out in store now, so you don’t have to wait to continue Clementine’s adventure as a rebel.

ABOUT THE AUTHOR: Stephanie first knew she wanted to be an author when she was in second grade, sitting in a book club drinking tea and reading books like The Egypt Game. She dreamed someday people might drink tea while devouring books she had written. She wrote her first book soon after, a 30-page fantasy story–complete with a hand-drawn map–stapled together and presented to her younger sister for a birthday present.Now twenty-two years old, she lives in San Diego with her family. She graduated from San Diego State University with a degree in film production and a publishing deal for a young adult sci-fi trilogy. She is the author of Extraction, Rebellion, and the forthcoming Evolution.

When she isn’t lost in other worlds, she can be found singing, marveling at the night sky, or fangirling over TV shows.Visit her at www.stephaniediazbooks.com and follow her on twitter.

One comment on “Book Review: Extraction by Stephanie Diaz”