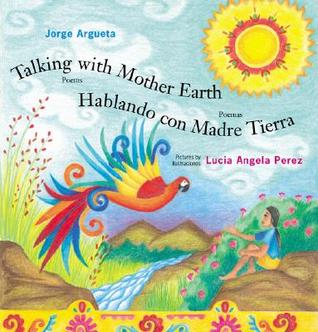 DESCRIPTION OF THE BOOK (from Goodreads): Tetl’s skin is brown, his eyes are black, and his hair is long. He’s different from the other children, whose taunts wound him deeply, leaving him confused and afraid. But Tetl’s grandmother knows the ancient teachings of their Aztec ancestors, and how they viewed the earth as alive with sacred meaning. With her help, he learns to listen to the mountains, wind, corn, and stones. Tetl’s journey from self-doubt to proud acceptance of his Nahuatl heritage is told in a series of powerful poems, beautifully expressed in both English and Spanish. Vivid illustrations celebrate nature’s redemptive powers, offering a perfect complement to the poignant story.

MY TWO CENTS: History books and other nonfiction texts often speak of the Americas’ original inhabitants in the past tense, as if they completely disappeared after Europeans swept across the land. For example, I remember learning that the Spanish defeated and killed (or married) all indigenous people when they invaded Mexico and Central America in the sixteenth century. Wrong. Despite facing frequent marginalization and discrimination by “mainstream” society, Nahua people, the diverse descendants of the Aztecs, still live in El Salvador, Mexico, and the United States today.

Talking with Mother Earth / Hablando con Madre Tierra – a stunning bilingual collection of autobiographical poems and winner of the illustrious International Latino and Américas Book Awards for outstanding works of Latin@ children’s literature – affirms and celebrates the complexity of a contemporary Nahua individual. In these simple yet profound poems, Jorge Tetl Argueta, who identifies as Pipil Nahua, provides us with a window into his childhood and sensitively explores issues of cultural identity from several different angles, including his spiritual beliefs, his connection to Mother Earth, ethnic pride, racial bullying, and history of the Nahua people. As they read his beautiful words, children with Nahua heritage might see reflections of themselves, while readers from other backgrounds can learn about cultural practices and perspectives that are different from their own.

Mirroring Argueta’s poems are Lucía Angela Pérez’s vibrant pastel drawings, simultaneously striking and soft, bold and soothing as they permeate each page. Prepare to be swallowed up in color as soon as you open the cover! Also, the illustrations sustain the theme of links between the present and past as they portray young Tetl standing side by side with his grandmother, his ancestors, and Aztec gods.

Another enticing feature of this book is its relatively unusual dual language format. Although we’re seeing more and more English-Spanish dual language books on the market these days, most of these books place the English text first on the page, above or before the Spanish text. While this positioning might not seem like a big deal, it can send a message to readers that English should be the first language in their lives – that it’s better than Spanish. Books that place Spanish first do pop up every once in awhile, however, and Talking with Mother Earth / Hablando con Madre Tierra is one of them, emphasizing to Spanish-speaking readers the importance of their linguistic skills.

So if you’re searching for a book that promotes empathy, beauty, linguistic diversity, cultural awareness, and positive self-image, look no further! If you enjoy it, be sure to check out Jorge Argueta’s other works for children – they’ll leave you smiling (and probably a little bit hungry).

TEACHING TIPS: Due to multifaceted subject matter in Talking with Mother Earth / Hablando con Madre Tierra, educators can choose to use the entire text or individual poems to start fruitful, critical discussions and lessons with their students. For example, teachers might draw upon “Indio” / “Indian” – an examination of racial bullying – when facilitating analyses of racism and discrimination in schools. Additionally, they might focus on Argueta’s poems on nature and Nahua spirituality to help students understand the diversity of religious beliefs and ethnicities in contemporary Latin America. Or they might highlight this book as a mentor text when encouraging students to write their own nature poetry.

The dual language format of Talking with Mother Earth / Hablando con Madre Tierra also makes it a valuable resource for Spanish and English learners – the abundance of words related to nature can help readers describe the earth bilingually. An added bonus is the inclusion of several Nahuatl words and phrases that illustrate Latin@ / Latin American linguistic diversity even further.

ABOUT THE AUTHOR (from his website): Jorge Tetl Argueta is a celebrated Salvadoran poet and writer whose bilingual children’s books have received numerous awards. His poetry has appeared in anthologies and textbooks. He won the Américas Book Award, among other awards, for his first collection of poems for children, A Movie in my Pillow. He was the Gold Medal Award winner in the 2005 National Parenting Publications Awards (NAPPA) for Moony Luna / Luna, Lunita, Lunera. His other works for children include Xochitl and the Flowers (2003 Américas Award Commended Title), Trees are Hanging from the Sky, Talking with Mother Earth, The Little Hen in the City, and The Fiesta of the Tortillas.

Marianne Snow is a doctoral student at the University of Georgia, where she researches Latin@ picture books, representations of Latin@ people in nonfiction children’s texts, and library services for Spanish-speaking children and families. Before moving to Georgia, she taught Pre-K and Kindergarten in her home state of Texas and got her master’s degree in Teaching English to Speakers of Other Languages (TESOL) at Texas A&M University. In her spare time, she enjoys obnoxiously pining for Texas, exploring Georgia, re-learning Spanish, and blogging at Critical Children’s Lit.