As a reader of this blog, you know what we’re up against. Nearly 5,000 children’s and YA books were published in 2012, but only 1.5% of those titles featured Latin@s. Given the historical inequities our community has faced—which have resulted in our kids’ educational struggles, low average reading level, and high drop-out rate—it is more important than ever that children of diverse cultural backgrounds have access to books in which they see themselves reflected.

Since 2011, the 501(c)(3) non-profit Valley Artist Outreach has worked to promote the artistic expression of disaffected youth in the colonias of South Texas and of artists whose work touches on issues of import to the community. As part of that work, VAO’s publishing wing has released several anthologies, notably ¡Juventud! Growing up  on the Border, a collection of YA stories and poems edited by René Saldaña, Jr. and Erika Garza-Johnson that features the work of David Rice, Xavier Garza, Jan Seale, Guadalupe García McCall, Diana Gonzales Bertrand and many others.

Stemming from the success of that book, VAO is proud to announce Juventud Press, an exciting new imprint seeking to bring diverse books to young readers often marginalized by traditional publishing. Juventud Press will release three to four middle-grade and young-adult titles a year, with an eye toward expanding into children’s literature in the near future. Written by and/or featuring Latin@ characters and settings, these books will help contribute to the recent surge in diversity in kid lit. 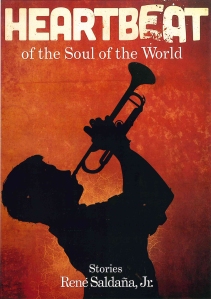 Our first title will be Heartbeat of the Soul of the World, a new short-story collection by René Saldaña, Jr., author of books such as The Jumping Tree and The Whole Sky Full of Stars. A vital book that explores the ins and outs of Latin@ adolescence along the border, Heartbeat is a flagship publication that encapsulates the values and mission of Juventud Press.

In addition, we seek to promote the voices of up-and-coming writers of diverse YA literature by establishing the Nueva Voz Award, which will select a winner each summer from among manuscripts submitted by unsigned, un-agented writers. The winner of the award will receive a $500 advance and standard publishing contract, and her/his book will be published in the fall of that same year.

To be competitive even in the field of independent small presses, we need the initial capital to produce high quality, visually engaging books.

We are asking for pledges through Kickstarter. Each one comes with a fantastic reward, so please take a look: https://www.kickstarter.com/projects/1780116159/juventud-press-launch

These start-up funds will secure the visual artists needed for covers, underwrite website design, cover the deployment of the Nueva Voz Award, and purchase initial publicity for the imprint.

Please consider backing this worthwhile project that will add to the flowering of diversity in publishing for our youth.

The Editorial Board of Juventud Press

2 comments on “Juventud Press, a New Indie Publisher, Will Focus on Latin@ MG & YA”