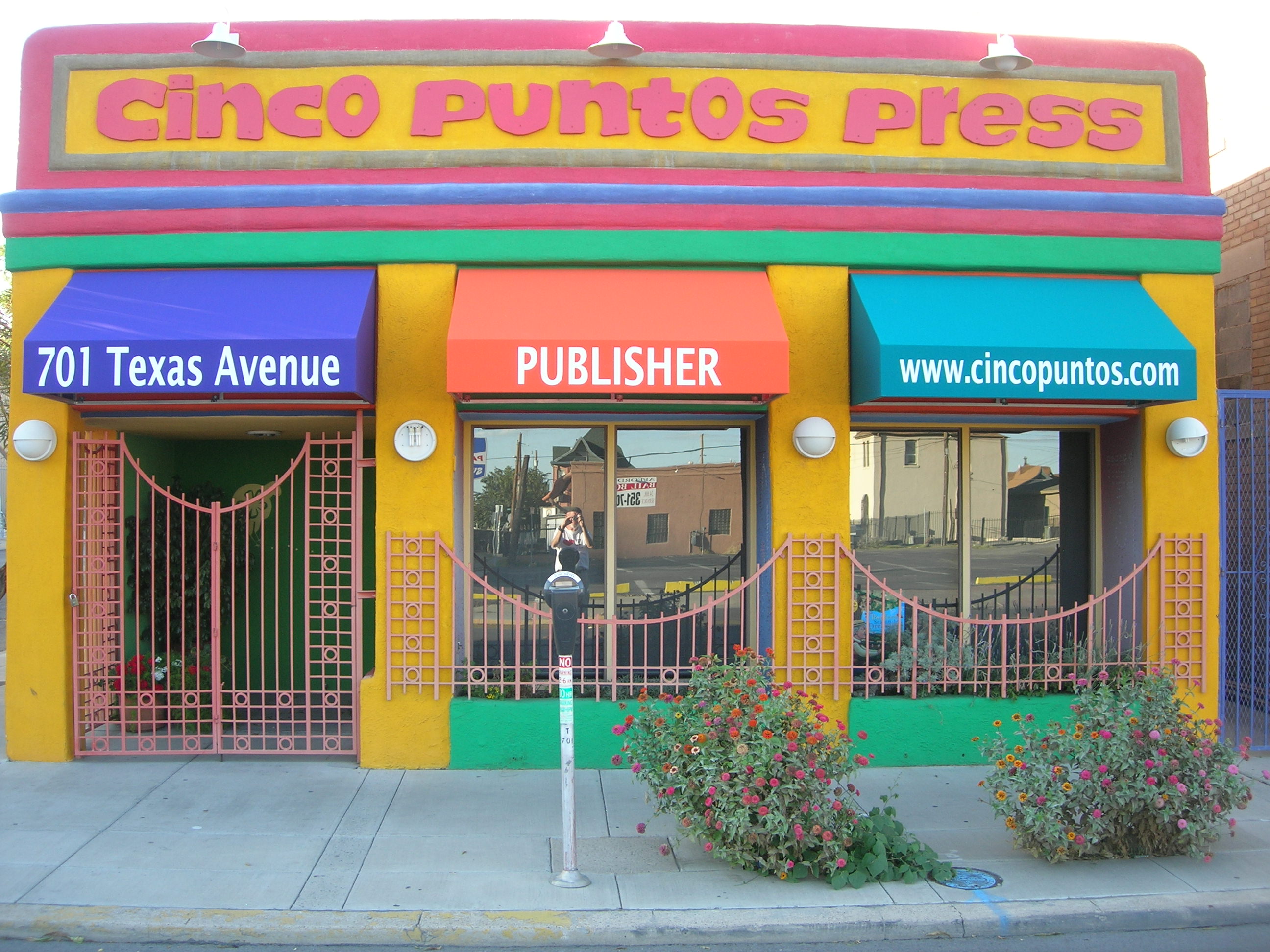 The El Paso, Texas publisher, Cinco Puntos Press, has been on my radar ever since my mother-in-law—who lives in Las Cruces, New Mexico, an hour away from the Cinco Puntos Press offices—handed me a copy of Benjamin Alire Saenz’s YA novel, Sammy and Juliana in Hollywood. I fell in love with that book and went on to read Saenz’s follow-up, Last Night I Sang to the Monster. Now my wife and I regularly read Cynthia Weill’s Opuestos and AbeCedario to our toddler and Saenz’s A Gift from Papá Diego is our older son’s current go-to bedtime picture book. (Full disclosure: I cry real tears every time Papá Diego shows up to the party.)

Isabel Quintero’s Gabi, a Girl in Pieces was one of 2014’s most lauded books, winning the Morris Award, and showing up on book of the year lists put out by Kirkus, Booklist and The School Library Journal.

All these great Cinco Puntos titles beg the question: What is going on in El Paso?

Bobby and Lee Byrd, both writers, founded Cinco Puntos Press in El Paso, Texas thirty years ago. In a phone conversation, CEO John Byrd explained that, “When my parents moved here they sought out folks who were making art. In El Paso, that means Latino artists and folks writing about the Latino experience. We publish the kind of books we publish because we’re in El Paso. Our mission to do this kind of work was a natural outgrowth of where we were.”

Byrd lists El Paso as a strength for Cinco Puntos because it gives the publisher a unique perspective on life and art. He noted that New York publishers are all bound by the confines of Manhattan. “That’s why so much of what they do seems so similar. Being in El Paso, we don’t hear all that industry noise. We can develop our own unique perspective on publishing.”

A critical factor in Cinco Puntos’ growth has been their relationship with indie distributor Consortium, Book Sales and Distribution. “When we first started with Consortium, the industry had made it clear that books by Hispanic authors couldn’t sell through mainstream channels. Consortium helped change that. They successfully place a lot of stuff that really pushes the boundaries and we’re proud to have our books sold alongside others that are distributed by Consortium.”

I asked Byrd about the relationship between independent publishers and the We Need Diverse Books campaign. He noted that about half of the books (according to the most recent Multicultural Literature Statistics from the Cooperative Children’s Book Center) listed as “multicultural” were published by independent presses.

“It’s hard to find anyone who disagrees with the aims of We Need Diverse Books—even traditional publishers all agree. Still, New York houses just aren’t publishing those books. We Need Diverse Books is crucial, but energy focused on changing New York is misplaced.” Real change, Byrd insists, will come when we support and grow the diverse publishers, small publishers, independent publishers who are already doing the work of producing great “diverse books” by and about traditionally underrepresented voices.

Check out just of few of the notable Cinco Puntos Press titles below, and while you’re at it, grab some coffee and “Pan Dulce” with founder, Lee Byrd, as she interviews Cinco Puntos authors at the publisher’s YouTube channel .

Walking Home to Rosie Lee by A. LaFaye, illustrated by Keith D. Shepherd

Maximilian and The Mystery of the Guardian Angel by Xavier Garza

Maximilian and the Bingo Rematch by Xavier Garza

This Thing Called the Future by J. L. Powers

The Smell of Old Lady Perfune by Claudia Guadalupe Martinez

Last Night I Sang to the Monster by Benjamin Alire Saenz

Gabi, a Girl in Pieces by Isabel Quintero

Patrick Flores-Scott was, until recently, a long-time public school teacher in Seattle, Washington. He’s now a stay-at-home dad and early morning writer in Ann Arbor, Michigan. Patrick’s first novel, Jumped In, has been named to a YALSA 2014 Best Fiction for Young Adults book, an NCSS/CBC Notable Book for the Social Studies and a Bank Street College Best Book of 2014. He is currently working on his second book, American Road Trip