The final Hunger Games movie, Mockingjay Part 2, raked in $75.8 million over the holiday weekend, landing in the number one spot for the second weekend. One article reported the action adventure has made $440.7 million worldwide so far and is inching closer to $3 billion total for the series. Yet, few novels depict Latin@ main characters in action adventures. We’ll pause here to highlight a few, which would make great holiday gifts for your action-loving young reader:

And, this summer, one more title was added to the list: Moving Target, a middle grade featuring a young Latina caught in a Divinci-Code-like European adventure. On Thursday, we will post a review of the novel by Christina Diaz Gonzalez, who is also giving away a signed copy of the novel and a poster. See the link at the end of this post to enter. First, though, read what Christina had to say about her inspiration for Moving Target.

Christina Diaz Gonzalez: While growing up, I loved action/adventure stories where the hero went on a quest or a mission and often had to fight villains in order to fulfill their destiny. Whether these stories were in books, TV, or movies there was one thing that was always true… none of the heroes ever looked or sounded quite like me. Years passed (many, many years) and today there are still very few heroes that reflect the diversity of today’s readers. 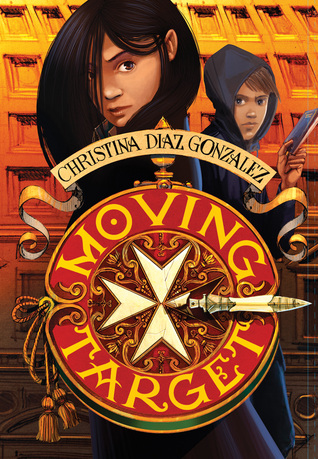 So, when I came up with the idea of writing my own action/adventure novel (that has been described as  “Percy Jackson meets Da Vinci Code with a dash of Indiana Jones”) it only seemed natural that the main character would be someone my ten year-old self would have loved to see as the heroine. That was when the character of Cassie Arroyo first popped into my head. She’s an American girl with a Hispanic background (like me) who discovers that she is part of an ancient bloodline that is connected to the legendary Spear of Destiny (this part is definitely not like me). In the story, there are riddles to decipher, mysteries to solve, and assassins to evade… all the things that I loved to read about when I was kid. (Okay, who am I kidding? I STILL love to read about all that stuff!) And one of the best parts about writing this story (which is part of a series) is that it’s another small step forward in the general realization that heroes come in all shades and ethnicities.

So buckle up and enjoy a thrilling ride with a brand new heroine… the smart, courageous, and Latina, Cassie Arroyo.