In the last weeks that I have been re-reading Daniel José Older’s Shadowshaper the media has been on a frenzy talking about the terrorists attacks in Paris, the horrible video of Laquan McDonald being shot several times by a Chicago cop, and the San Bernardino shootings. Turning on the news or scrolling through Facebook feels like a constant reminder of our precarity. In turn, we are being reminded that we are not safe or that some bodies have access to safety while others do not. I live in Chicago now and lived near San Bernardino not too long ago, so my anxiety has skyrocketed as I try to process all of this violence. I have asked myself: How do we begin healing from the daily violence we are experiencing and/or witnessing? How do we find safety in a society that is too quick to remind us that we are not safe? And how do we find empowerment amidst all this darkness? While these questions may be broad, vague, and overwhelming, they have forced me to come to some sort of understanding so that I may share and create safe spaces with the young peoples I engage with. There are certainly many ways to answer these questions but I have found some of the ones I need in Shadowshaper.

It is no surprise that Older’s Shadowshaper has been on several “best of 2015” lists. Sierra Santiago is a unique heroine within young adult sci-fi and fantasy novels and within Latina/o young adult literature. Sierra’s journey as a Shadowshaper allows her to see what others cannot, and as a result, she becomes responsible for saving the legacy and future of the Shadowshapers. By combining the power of her ancestors with the power in art, Sierra is able to save herself, her family, and her community.

Throughout the novel, Sierra is confronted, and oftentimes attacked, by various forms of violence. Aside from the obvious corpuscules, demons, and throng haints that try to kill Sierra, she is also faced with the daily consequences of gentrification, street harassment, police brutality, and academic researchers in her community. The latter may not appear very violent, but there are many Dr. Jonathan Wicks in real life, collecting data, writing ethnographies, and profiting off their research in communities of color. Sierra battles these different forms of violence at the same time. The dragon she is painting on the side of the building at the beginning of the novel, for example, challenges gentrification by reclaiming space and comes in handy at the end of the novel when she fights Wick. In this way, Sierra’s power does not just come from being the leader of the Shadowshapers; it also comes from art and its possibility to transform her world.

Nicholasa Mohr’s Nilda (1973) also presents a protagonist whose ability to draw allows her to transform the world around her and create counternarratives about her community. While Nilda does not have to worry about spirits or demons coming after her in her New York City home, she does face a great deal of oppression. Nilda uses her drawings to reimagine the world around her. She oftentimes positions herself, and those around her, as having power even if that is not her reality. The opening illustration of Nilda, for example, depicts a hot summer day when the fire hydrant has been opened for the children of the community. Nilda captures the event with contour drawings, which suggests a fluidity or connection between her city, her community, and her neighbors. There is a clear contrast between the city and the community that points to an existing power tension between the city and its residents. Nilda’s representation of her neighbors as occupying the most space in her drawing suggests a shift in power dynamic from the city to the people. The illustration captures a moment of relief from the heat before the police arrive to close the fire hydrant and ask people to clear the streets. The exclusion of the police in Nilda’s drawing, however, demonstrates a challenge to such authority. Nilda’s imagination allows her to visualize a space where her neighbors have access to power and control of their own community. Nilda and Sierra use art, in different forms, to heal, protect, and empower themselves and those around them.

Sierra Santiago demonstrates that art can save lives and can change the world. Sierra’s role throughout the novel is to bring life to the fading murals in her community. These murals are fading because the people that painted them and the spirits within the murals are in danger. Sierra and her friends must believe in the knowledges passed on to them by their elders, the oral histories they have heard, and their own experiences to defeat Wick and the demons that seek to kill them. Sierra’s story is one of resilience and empowerment to which many young peoples can relate. Our murals are fading. Whether those murals be our self-esteems, our power, our unity, or our souls, they fade every time another young black man is killed by a cop, every time another LGBTQIA+ youth commits suicide, every time we experience or witness islamophobia and xenophobia. We fade, too. At the end of the novel, Sierra is able to defeat Wick by embracing her powers, which stem from her family and her culture. She realizes that she is not alone but that she is many at the same time: “She was the shimmering culmination of all her ancestors’ strife, joyfulness, and struggle. She was a radiant child of spirit. She was a hundred different souls vibrating within a single living body” (289). And while we may not have the magic to move spirits from mural to mural to defeat our enemies, we can harness the power and strength that comes from our peoples and our cultures.

Unfortunately, violence in the lives of people of color is not new, but neither is the desire to survive, to be safe, and to be free. There is power in our histories and art is an excellent way to harness that power. I am reminded of the 2013 Academy Award winning documentary, Inocente. The short documentary follows the life of 15-year-old Inocente and her desire to become an artist despite being homeless and undocumented. It is clear throughout the documentary that Inocente faces various oppressions on a daily basis. Aside from being homeless and undocumented, she has a challenging relationship with her mother, struggles with depression, and blames herself for her family’s situation. Inocente is part of an afterschool arts program that allows her to focus her energy on her art. Her paintings gave her opportunities that she did not have before, like an art show, a college scholarship, an apartment, and permanent residency. Inocente’s story is not much different than that of other undocumented youth, with the exception that her life was captured on film, won an Oscar, and the perks that come with it. In other words, our life story may not win us an Academy Award but our art can change lives. Sierra, Nilda, and Inocente show that if all else fails, art can at least give us hope. And hope can be a powerful tool.

So how, then, do we find healing in turbulent times? Or how do we find safety when there seems to be none? And how to we find empowerment when we are so often disempowered? One way to do it is through art. In embracing art, we are forced to look inward, to react, and to take action. We must find our inner shadowshaper, and we must paint dragons on the sides of buildings because they could save our lives one day. 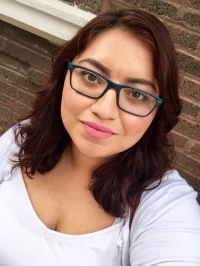 Dr. Sonia Alejandra Rodriguez received her PhD in English from the University of California Riverside. Her research focuses on the various roles that healing plays in Latina/o children’s and young adult literature. She currently teaches composition and literature at a community college in Chicago. She is also teaches poetry as a teaching artist through a local arts organization. She is working on her first children’s picture book

One comment on “Shadowshaper: Art Can Change the World”