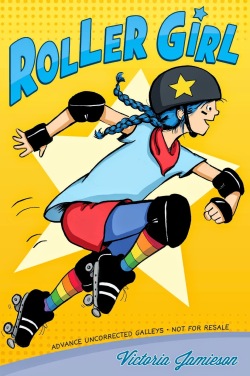 Roller Girl is a recipient of a 2016 Newbery Honor!

FROM THE NEWBERY MEDAL HOME PAGE: Astrid falls in love with roller derby and learns how to be tougher, stronger and fearless. Jamieson perfectly captures the highs and lows of growing up in this dynamic graphic novel.

MY TWO CENTS:  Victoria Jamieson’s Roller Girl captivated me right off and only grew sweeter on a second reading. In addition to the immersive power of graphic novels, the story of Roller Girl delivers a solid punch: 12-year-old Astrid Vasquez gets hooked on roller derby and devotes herself to the sport while navigating the ups and downs of middle-school friendships.

Astrid’s passion for roller derby ignites when Ms. Vasquez takes Astrid and her best friend, Nicole, to their first derby bout. Afterward, Astrid can talk of nothing but the derby and fails to notice that Nicole doesn’t share her excitement. Come on, how could she not? Check out the theater of it all: the players’ costumes and wild hair colors, the electricity of the crowd, and the take-no-prisoners energy that drives the sport. Astrid even discovers an idol in Rainbow Bite, a star jammer for the Rose City Rollers, who exemplifies roller derby’s ferocity and skill. Astrid loves the fact that there’s nothing girlie or restrained about roller-derby culture, and when she hears about summer camp for junior players, she’s chomping at the bit to sign up. Best friends do everything together, right? This assumption crumbles when Nicole reveals that she’s planning to attend dance camp instead, along with Rachel, Astrid’s one true nemesis from their early elementary days.

With Nicole’s “desertion,” Astrid has to face the first day at derby camp alone. From there, complications abound. Ms. Vasquez is under the impression that Nicole’s mom will give Astrid a ride home at the end of each day’s session. Astrid is afraid to tell her mom that Nicole isn’t participating, as this would lead to all sorts of questions Astrid wants to avoid. As a result, the lies she must tell and the long walks home she must endure only add to the drama of those first grueling weeks at the rink. Did I mention that Astrid discovers she’s a lousy skater?

Despite aching muscles and botched skill drills, Astrid persists and finds new motivations as she enters more deeply into the world of her chosen sport. The camp coaches balance demanding practices with timely pep talks, and Astrid strikes up a friendship with Zoey, a camper her age. Another boost comes in the form of a correspondence with Rainbow Bite that starts when Astrid discovers the star jammer’s locker and begins leaving notes for her. (Rainbow proves a generous celebrity and writes back with inspiring tips.)

None of these triumphs mean that Astrid transforms into a roller derby standout; what matters are the personal victories that she achieves over the course of the summer, including earning the respect of her teammates and figuring out some important things about who she is and what sort of friend she wants to be.

Roller Girl succeeds on multiple levels. Through a lively narrative and a rich visual landscape, it draws readers into the fascinating world of roller derby, often explaining the rules and strategies of a sport unfamiliar to many through clever diagrams and dramatized scenes. Through these invitations to explore the sport, it portrays women and girls as highly capable both physically and intellectually. Readers get a clear sense that women can—and should—take on tough challenges.

In addition, Roller Girl gives us a Latina character comfortable with her ethnic identity and shows us Anglo characters who are equally accepting. Astrid’s Latina background doesn’t even emerge until page 54, and only much later do we learn that the family is Puerto Rican. This information comes across casually, as just another cool detail about the main character. At least this is how Astrid’s new friend Zoey takes the information when Astrid reveals it during a scene in which West Side Story plays in the background.

Astrid says to Zoey, “I’ve seen this movie! My mom made me watch this for an evening of Puerto Rican cultural heritage. Or something.” (At first blush, the idea that an adult puertorriqueña would push this movie as representative of her culture struck me as improbable. I associate West Side Story with racial stereotypes, discriminatory casting—white actors playing the Puerto Rican leads—and the problematic practice of filming lighter-skinned Latino actors in brown-face. But after asking around, I learned that not all Latinos recoil at the legacy of West Side Story, and many view Rita Moreno’s dynamic, Oscar-winning performance as a cause for celebration.)

In general, my sense is that ethnicity may not be central to the story, yet it gives readers additional exposure to a positively framed diverse character who faces the same challenges most 12-year-olds face. In fact, one of the biggest ways that Roller Girl succeeds is in its depiction of Astrid’s emotional journey. It delivers an honest and satisfying ride through many of the complex social and internal upheavals of middle-school life. I particularly like the author’s portrayal of mixed emotions. On one page, a central panel depicts a kindergarten poster of cartoon faces bearing unambiguous expressions. The caption reads: “The feelings were all simple ones, like ‘happy’ and ‘sad.’ They didn’t tell you about feelings that got mixed together like a smoothie.” In the next panel, Astrid contemplates exactly such “mixed together” feelings, the result of running into Nicole after weeks of separation. Astrid is happy to see her former best friend yet sad about the emotional distance that stands between them now. Out of this, she coins a new word, “shad,” a distillation of those contradictory feelings—happy and sad. This moment of acceptance that emotions are complex seems to me a marker that a character is coming of age.

As happens with the best of sports stories, Roller Girl follows a character’s trajectory through brutal training challenges, inevitable setbacks, as well as moments of triumph–and elevates these into something beyond athletic achievement. At twelve, Astrid is finding her way in the world. Some of her falls are literal and happen on the skating rink. Some are relational and emotional, and arrive without the benefit of coaches to teach her how to land injury-free. The important thing is that after each fall, Astrid is learning how to dust herself off and get back into the game.

TEACHING TIPS AND RESOURCES: A major theme of Roller Girl is the troubled landscape of middle-school friendships. Try this exercise with young readers. Assign a “treasure hunt” for episodes in the story that demonstrate the ebb and flow of friendships. Ask students to identify relational missteps that Astrid and other characters make, i.e., jumping to conclusions, not listening, passing judgments, not speaking up; ask them to do a similar search for positive practices that build friendships.

For visual help on grasping the rules of roller derby, check out the video on this page.

One of Astrid’s challenges is figuring out a good derby name. There are rules and traditions that must be observed, as outlined in this guide. 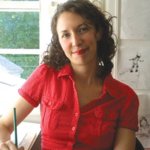 ABOUT THE AUTHOR/ILLUSTRATOR: Pennsylvania native Victoria Jamieson attended the Rhode Island School of Design. Her work history includes a stint as book designer for HarperCollins Children’s Books. She now writes, illustrates, and teaches illustration at Pacific Northwest College of Art in Portland, Oregon, where she also skates in the Rose City Rollers roller-derby league.

Newbie skaters like Astrid could probably use the tips from this video.

One comment on “Book Review: Roller Girl by Victoria Jamieson”