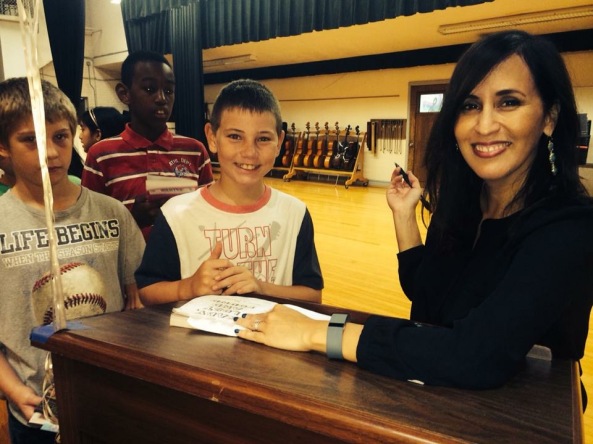 We’ve all met piñata busters and trailblazers. These are the extraordinary people who take on immense challenges to pave the way for others to succeed. These folks are determined, ready-to-bust-through-obstacle-types who put the “P” in perseverance and the “G” in ganas.

In my second middle grade novel, Allie, First At Last (3/29/16; Scholastic Inc.) ten-year old Alyssa Velasco wants desperately to make her mark and be a trailblazer like the rest of her family—a highly motivated group of trophy-winners and “first-evers.” However, in her determination to win something, she steamrolls through anyone she believes is trying to compete with her, including her ex-best friend, Sara, and new buddy, Victor Garcia.

In short, Allie has no clue what it means to be a true trailblazer or piñata buster, but by the end of the book, she finds out the hard way.

Being raised in this community, I have always been inspired by the stories of individuals who, regardless of the obstacles before them, like racism, sexism, and poverty, could deliver a strong smack to the status quo and negative stereotypes.

As I wrote Allie, First At Last, I relished researching other Hispanic and non- Hispanic “piñata busters.” I couldn’t feature all of the piñata busters I wanted in my novel, but here are just a few I mention:

The thing about piñata busters/trailblazers is that sometimes we look for them in Hollywood films, Wikipedia, or our history books, but the truth is we don’t have to look that far. They’re all around us.

In Allie, First At Last, Allie’s new friend, Victor Garcia, is a true trailblazer. He is not concerned about a trophy shelf or being famous; he is simply trying to be the first in his family to graduate from high school and go to college someday. The obstacles in front of him are clear: his family is poor, and he will depend on scholarships to afford college. He is a child of immigrants and will be navigating the path to college by himself.

Regardless of the hurdles, Victor enters the game willingly and with one sole purpose: to gash a hole in the obstacles (the piñata) so that his younger siblings and entire family get the sweet rewards.

How many of us have been in Victor’s shoes or know of someone who has been the first in his/her family to go to college? Graduate from college? Start a business? Become a teacher? Publish a children’s book?

For me, Allie, First at Last, is a story celebrating generations of piñata busters and trailblazers.

I wrote it because I couldn’t get Allie Velasco out of my head. She had something to say, so I wrote it for her and for all the kids out there dealing with competition and finding their place in the world. I hope Allie’s story inspires children to explore trailblazers in their own families who have opened a path for them to reach their dreams. I hope they, just like Allie, decide that in their young lives, they won’t close doors behind them, but leave them wide open for others to enter, too.  And I hope, like Allie, they understand that, “true trailblazers are motivated not by glory, but by love for friends, family, and country.”

Angela Cervantes is a native of Kansas. Her achievements are manifold and include earning an MBA, co-founding an all-female poets group, teaching high school, and writing two middle-grade novels, Gaby, Lost and Found, and Allie, First at Last. To learn more, visit her website here.

WE ARE GIVING AWAY A HARDCOVER OF ALLIE, FIRST AT LAST BY ANGELA CERVANTES, WHICH OFFICIALLY RELEASES 3/29/16.