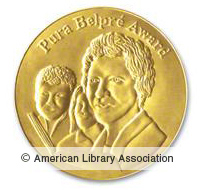 We have already covered Viva Frida and Niño Wrestles the World. Below, we highlight the others:

Descriptions (all from Goodreads): Los Gatos Black on Halloween: Under October’s luna, full and bright, the monsters are throwing a ball in the Haunted Hall. Las brujas come on their broomsticks. Los muertos rise from their coffins to join in the fun. Los esqueletos rattle their bones as they dance through the door. And the scariest creatures of all aren’t even there yet! This lively bilingual Halloween poem introduces young readers to a spooky array of Spanish words that will open their ojos to the chilling delights of the season.

Just a Minute: A Trickster Tale and Counting Book: In this original trickster tale, Señor Calavera arrives unexpectedly at Grandma Beetle’s door. He requests that she leave with him right away. “Just a minute,” Grandma Beetle tells him. She still has one house to sweep, two pots of tea to boil, three pounds of corn to make into tortillas — and that’s just the start! Using both Spanish and English words to tally the party preparations, Grandma Beetle cleverly delays her trip and spends her birthday with a table full of grandchildren and her surprise guest. This spirited tribute to the rich traditions of Mexican culture is the perfect introduction to counting in both English and Spanish. The vivacious illustrations and universal depiction of a family celebration are sure to be adored by young readers everywhere.

Just in Case: Yuyi Morales takes us on a new journey with Señor Calvera, the skeleton from Day of the Dead celebrations. Señor Calvera is worried. He can’t figure out what to give Grandma Beetle for her birthday. Misunderstanding the advice of Zelmiro the Ghost, Señor Calvera decides not to get her one gift, but instead one gift for every letter of the alphabet, just in case. Una Acordéon: An accordion for her to dance to. Bigotes: A mustache because she has none. Cosquillas: Tickles to make her laugh… only to find out at the end of the alphabet that the best gift of all is seeing her friends.

MY TWO CENTS: First of all, I want to take a moment and talk about just how much of a force Yuyi Morales is in picture book illustration. She has won a third of the 15 Pura Belpré Medals for illustration that have been awarded since 1996. In addition, she has won two illustration honors and one narrative honor, bringing her total to eight awards, nearly twice as many as any other artist and all since 2004. That is a huge achievement, and a testament to the vision, craft, and beauty that Morales puts into her work. There is no one quite like her working in picture books today.

All three of these picture books feature Morales’ acrylic paintings, with touches of the mixed-media that has become more prominent in her recent work. Each also has a fantastical element, from the various monster creatures in Los Gatos Black on Halloween to Señor Calavera in Just a Minute and Just in Case.

In Los Gatos Black on Halloween, the colors are layered, allowing some characters to be visible through the transparent ghosts and building up as more and more ghostly characters join what eventually becomes the monster ball in an old abandoned house. The color palette is dark and rich, contrasting the glowing moon and night sky with colored tombstones and the interior of the old mansion. Morales plays with scale and perspective to lend an otherworldly look to the spreads; sometimes we only see a pair of legs dangling over a broomstick or the round face of a ghost as its tail extends right off the page.

The colors in Just a Minute are brighter and the spreads less crowded than Los Gatos Black on Halloween, but the story they tell is just as dynamic. This was Morales’ first project as both author and artist, and she keeps the story moving at a fast pace as Grandma goes from cleaning to cooking, to decorating. Subtle touches of color make Señor Calavera a less scary figure for the youngest readers, including the flowers for eyeballs and the expressive mouth that finally turns into a smile. As befits a heroine who is using action to delay Señor Calavera, Grandma Beetle’s poses are precise and sharp, whether she is placing cheese in a frying pan or leaning over to put pots in the oven. Grandma’s eyes and face express her cleverness and care as she watches Señor Calavera from across the room or gives a wink while chopping up fruit. Perspective shifts reinforce the upside-down nature of this story; the floor of Grandma’s house seems to tilt as we first see Señor Calavera in close-up, peeking over her shoulder and then far away in the corner of the room, stamping his foot in frustration. The little cat’s reactions to Señor Calavera are a humorous touch, and readers will enjoy finding it on each spread, looking curious, tentative or scared, depending on the page. Readers will love the final note left by Señor Calavera and cheer for Grandma Beetle, who was so resourceful in buying herself a little more time on Earth.

Morales brings more texture and mixed media to the illustrations in Just in Case, her second effort as both author and artist. Perhaps because most of the action in the book takes place in the cemetery, rather than in Grandma’s house, the backgrounds are looser and the characters float around on the page. The new character Zelmiro the ghost blends in with the background color on each spread as he advises Señor Calavera on what to give Grandma Beetle for her birthday. The list of presents grows with the alphabet, and Morales keeps things interesting by not just including objects such as the accordion but also actions such as cosquillas (tickles) and natural phenomena like niebla (fog). One of my favorite things about this book is that it follows the Spanish, rather than the English alphabet, including letters I learned as a child, like ‘Ch’, ‘Ll’ and ‘Ñ’. Depending on where you are in the Spanish-speaking world, ‘ch’ and ‘ll’ aren’t taught as separate letters anymore, so it was nice to see them here! Some of the presents are words commonly taught in Spanish classes, such as ‘escalera’ or ‘semilla,’ but others are more colloquial and region-specific like ‘granizado’ and ‘ombligo.’ The specificity in both language and image are lovely. Careful readers will note that the historieta (comic book) that Señor Calavera gives Grandma is a handmade version of Morales’ earlier book Just a Minute and will also find the reason for the spectacular bicycle crash that ruins all the presents.

From ghosts to skeletons to grandmothers cooking elaborate birthday feasts, these three picture books showcase Morales’ talents at depicting both the light and dark in Latino culture.

TEACHING TIPS: Los Gatos Black on Halloween is a wonderful choice for a storytime, especially events connected to the holiday. Both Just a Minute and Just in Case are also perfect for reading aloud, as well as excellent teaching tools for counting and the alphabet. Morales has various activities for mask and puppet making on her website and the actions of Just a Minute in particular are perfect for acting out with younger readers. Just in Case is an excellent mentor text for classes working on writing their own culture-specific alphabet books. Just a Minute could also be used as a writing tool, with students inventing their own ways of making Death wait just a little longer.

And as a bonus, here is a video from Yuyi about why she loves picture books: 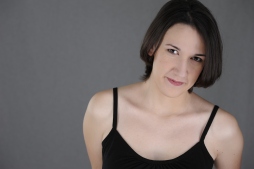