DESCRIPTION FROM THE PUBLISHER:

Chato’s Kitchen: Chato can’t believe his luck. Not only is he the coolest low-riding cat in East L.A., but his brand-new neighbors are the plumpest, juciest, tastiest-looking family of mice to move into the barrio in a long time. So Chato and his best friend, Novio Boy, get out the pots and pans, the tortillas and the beans–everything you’d need for a welcoming feast, except for the main dish, and the guests of honor. Of course, in Chato’s mind they are one and the same thing. But the mice are bringing a surprise guest of their own, who may be more than a cool cat can swallow.

Chato and the Party Animals: Chato, the coolest cat in el barrio, loves to party–but not his best buddy, Novio Boy. Birthday parties always make him blue. “I’m from the pound,” he tells Chato. “I don’t know when I was born. I never knew my mami. I never even had a birthday party, or nothing.”So Chato plans the coolest surprise party for Novio Boy, inviting all of el barrio, and cooking up a storm. But he forgets the most important thing–inviting Novio Boy! Luckily, just as everyone starts remembering all the things they used to love about their long-lost friend, the birthday boy arrives with his own surprise–himself! In a starred review, Publishers Weekly called Chato’s Kitchen “Wickedly funny…Guevara’s cats are delicious send-ups of barrio characters, and Soto’s words glisten with wit. Salud to this magical pairing of talents.” 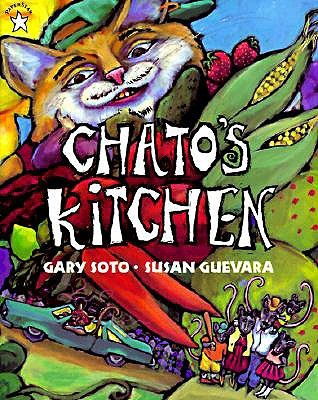 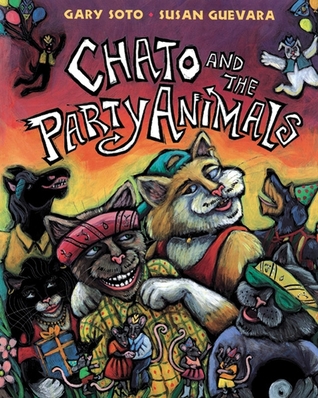 MY TWO CENTS: Susan Guevara won the Pura Belpré award for illustration in 1996 and 2001 for her work with Gary Soto in Chato’s Kitchen (1995) and Chato and the Party Animals (2000). Soto introduces readers to the coolest cat in the East Los barrio. In Chato’s Kitchen, Chato plans an elaborate scheme to get some delicious ratoncitos to come over for dinner and serve as the main course. Chato’s plan is foiled when his invited guests bring their friend Chorizo, a low-riding dog, to dinner with them. In Chato and the Party Animals, Chato throws an amazing birthday bash for his best cat friend Novio Boy, who has never had a birthday party of his own because he doesn’t know his date of birth since he’s from the pound. Through her illustrations, Guevara gives life to Soto’s sueve characters.

Guevara’s illustrations depict Chato as the cool cat Soto created him to be. Guevara draws Chato with a green baseball hat worn to the back, a single gold hoop earring, a gold tooth, a thin mustache, and a goatee. Guevara also creates a barrio full of hip vatos, carnales, and homeboys. Novio Boy wears a red wrapped bandana around his head with a seemingly plaid shirt only buttoned at the first button with a white plain shirt underneath. Papá ratoncito wears what appears to be a guayabera and Mamá ratoncito wears a traditional white rebozo with rose appliques. These seemingly minute details give the story a genuine East Los Angeles feel that might resonate with many barrios across the country.

Guevara’s personification of Chato and his friends make it easy for readers to connect with the characters specifically because these characters’ traits resemble that which we might see in our own relatives and neighbors. Pachuco, Chicano, and cholo histories are significant cultural aspects of Mexican/Mexican-Americans in Los Angeles. This is evident in the aesthetics, like fashion, language, and mannerisms, which have been passed on from generation to generation that are characteristic of Mexican/Mexican-American/Chicano culture. That is, Guevara’s illustrations signal an extensive history of Mexican/Mexican-American/Chicano identity in East Los Angeles through the characters’ fashion and gestures. Furthermore, Guevara’s artistic choices to illustrate the characters wearing clothing that have been represented by society as having cultural attributes, that have also been read as criminal, also indicates a history of resistance evident through fashion.

Scholar Catherine Ramirez calls this resistance “style politics[1]” as a way to demonstrate that fashion can serve as tool to challenge oppressive systems. In other words, while the backwards hat, piercings, bandanas, baggy pants, pompadours, etc. have cultural and historical significance and attachment to Mexican/Mexican-American/Chicano people, in this case, these same fashion choices have also been maligned by dominant society to represent criminality, deviancy, and otherness. The prevalence of these fashion statements today despite their negative associations and Soto and Guevara’s representations of these markers in their stories are indicators of resistance against dominant narratives.

Resistance is an evident theme in Guevara’s illustrations. While this resistance may be subtle for readers quickly glancing through the illustrations, they have a great impact once we realize that these moments are there. For example, in Chato’s Kitchen there’s a scene where Chato is illustrated kissing his fruits and vegetables as he prepares dinner for his guests. Guevara makes the bowl holding the food the center of this illustration with Chato on the side. The banana has a sticker that reads “Sangre de Honduras.” Stickers on bananas normally promote the brand or company associated with it. Through this detail on the banana, Guevara points out the violent role the US has played in Central America as made evident by the introduction of banana republics and banana wars.

Another example of resistance in the illustrations is seen in Chato and the Party Animals during the scene when Chato and his friends are looking for Novio Boy to take him to his surprise birthday party. Guevara gives us a bird’s-eye view of a Chato’s barrio and with careful attention the reader can see that there are murals on some of the buildings. One of the buildings has a mural of Che Guevara with the quote “We are not a minority” next to it, a quote that appears in the next scene as Chorizo howls and the quote is seen throughout the sky. Another wall depicts a cat with a cap and gown with the words “Si Se Puede.” There is also a mural of la Virgen de Guadalupe. The tiny murals represented in these books serve as a source of empowerment because they challenge dominant narratives that seek to oppress barrios similar to Chato’s.

Guevara’s illustrations in the Chato books have several layers that might be missed during the first read of the story that are definitely worth returning to and taking the time to notice all the important details. A reader can get lost just looking at Guevara’s illustrations, and that’s certainly a sign of a great artist.

[1] Ramirez explores the concept  of “style politics” in her book The Woman in the Zoot Suit: Gender, Nationalism, and the Cultural Politics of Memory (2009) and while she analyzes this form of resistance as it relates to women donning the traditional Pachuco Zoot suit in the 1940s and 1950s, it also has relevance in Soto’s and Guevara’s representation of Chato.

ABOUT THE ILLUSTRATOR (from her website): Susan Guevara is a visual storyteller. She tells her tales with illustrations, paintings, drawings and sculptures. For 27 years her work as a children’s picture book illustrator has been recognized many times, often for its contribution to literature set in Latino culture. Her recognition includes a 2005 New York Times Ten Best Illustrated books of the Year recipient, a two time Pura Belpré Illustrator Award winner, the first Tomás Rivera Award winner and most recently, a Pura Belpré Honor Award winner for her last book, “Little Roja Riding Hood” by Susan Middleton Elya. Her illustrations for “Chato’s Kitchen” by Gary Soto contributed to the book being recognized as one of the Best 100 Books of the Last 100 Years by the New York Public Library.