Leading up to the event, we will be highlighting the winners of the narrative and illustration awards. Today’s spotlight is on Raul Colón, the winner of the 2006 Pura Belpré Illustration Award for Doña Flor: A Tall Tale About a Giant Woman with a Great Big Heart. Colón also received Pura Belpré Illustration Honors for Portraits of Hispanic American Heroes and My Name is Gabito: The Life of Gabriel García Márquez/Me llamo Gabito: la vida de Gabriel García Márquez. 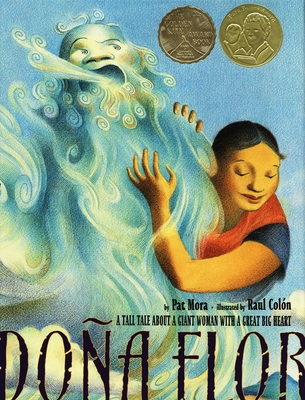 DESCRIPTION FROM THE PUBLISHER: Doña Flor is a giant lady who lives in a tiny village in the American Southwest. Popular with her neighbors, she lets the children use her flowers as trumpets and her leftover tortillas as rafts. Flor loves to read, too, and she can often be found reading aloud to the children.

One day, all the villagers hear a terrifying noise: it sounds like a huge animal bellowing just outside their village. Everyone is afraid, but not Flor. She wants to protect her beloved neighbors, so with the help of her animal friends, she sets off for the highest mesa to find the creature. Soon enough, though, the joke is on Flor and her friends, who come to rescue her, as she discovers the small secret behind that great big noise.

The creators of Tomás and the Library Lady, Pat Mora and Raul Colón, have once again joined together. This time they present a heartwarming and humorous original tall tale—peppered with Spanish words and phrases—about a giant lady with a great big heart.

MY TWO CENTS: Doña Flor, written by Pat Mora and illustrated by Raul Colón, tells the story of a giant woman that sleeps on clouds and makes piles of big tortillas. She protects her village from harm and she must do just that when the villagers inform her that a giant mountain lion threatens their safety. The biography of Raul Colón included on the dust jacket describes his illustrations as “an intriguing combination of watercolor washes, etching, and colored and litho pencils.”

When I look at Colón’s illustrations, the etchings remind me of fingerprints. The loops, the arches, the whorls, and all the lines that we might associate with fingerprints are visible in Colón’s illustrations. I am not familiar with techniques or the technicalities of etching and in saying that the illustrations remind me of fingerprints I do not mean to devalue the art in any way. My favorite illustration in this story is of Doña Flor using her thumb to carve out a riverbed in the village. Doña Flor is in a squatting position with her white skirt covering her thighs, and she has used her thumb to make a squiggly path for the water while the villagers look on. The riverbed has the details I associated with the fingerprints which, in this case, could be Doña Flor’s own prints.

Colón’s illustrations are beautiful, colorful, and magical. That I saw fingerprints when I looked closely at his illustrations speaks to the uniqueness of his art. While Doña Flor wears a blue shirt in most of the illustrations sometimes the shirt looks like it is embroidered and sometimes it looks like a plain T-shirt. The clouds on one page look round and fluffy and in the illustration where she’s made her bed of clouds it appears like she’s left her own fingerprints on the clouds she has gathered. Despite the uniqueness I see in his illustrations, there is certainly a sense of cohesion throughout the story. I’ve decided to focus on the etchings, the lines, and how much they appear like fingerprints because as I examined his illustrations, I also got the thought that our stories are as unique as our fingerprints. Colón’s illustrations in Doña Flor affirmed that for me. I couldn’t help but connect the details I saw in his art to the significance of the Pura Belpré award and the necessity for more Latinx children’s and young adult literature by and for Latinx.