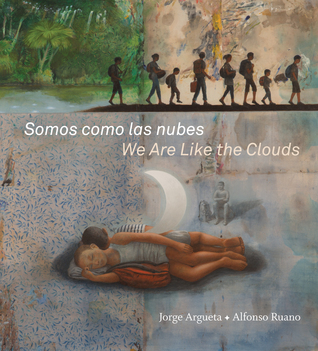 DESCRIPTION FROM THE BOOK JACKET: An eloquent and moving account of the tragic migrations of thousands upon thousands of children who are leaving their homes in Central America, often alone, to seek refuge in the United States. Why are they going and how does it feel to be one of them? What is this terrible trip like? What do their hopes and dreams for safety, a new life and a loving reception mean to them?

A refugee from El Salvador’s war in the eighties, Jorge Argueta was born to explain the distressing choice confronting young Central Americans today who are saying goodbye to everything they know because they fear for their lives.

This book is beautifully illustrated by master artist Alfonso Ruano.

MY TWO CENTS: Somos Como Las Nubes/ We are Like the Clouds is a moving collection of bilingual free verse poems. This is one of the few books that I have encountered about the heartbreaking experiences of children who leave their homes to embark on their journey to the United States. This collection of poetry begins with poetry depicting the experiences and sights of the children’s home countries. The poetry then shifts to the journey that children take to get to the United States. The author includes poems that describe the fears of traveling on La Bestia (a fast moving moving train that many migrants use to travel), discuss being accompanied by “coyotes,” and describe children’s feelings as they cross the deserts.  I’ll share one of the most powerful poems about the journey titled “Las Chinamas”. The word Chinamas refers to the border between El Salvador and Guatemala.

the border at Las Chinamas

I saw the river Paz.

I remembered my mother,

when I will see them again.

I look at the sky

What I loved about this book is that there is message of hope in knowing that children are resilient, but the author does not hold back in depicting the heartbreak that goes along with leaving a home country. The book allows the reader to the experience the treacherous journey to the United States through the eyes and wonder of a child. The pictures in this book are also stunningly beautiful. The pictures depict the children’s home countries, families crossing borders, and children laying on the soft sand in the desert. The final poems in the book offer hope. In the poem “Fear,” a mother tells her child in his dream, “This is not a dream, you are in my arms.” The child has arrived to his destination in Los Angeles.

I shed tears when I read this book. It is heartbreaking and it is a poignant reminder that children are children and that there are difficult decisions that children should not have to make. In my opinion, what makes this book even more powerful is that it is written by Jorge Argueta. The author’s note at the beginning of the book shares Jorge’s own experience of fleeing El Salvador and coming to the United States. He shares his inspiration for writing the book by stating, “Like the clouds, our children come and go. Nothing and no one can stop them”.

TEACHING TIPS: This book is an invitation to learn about the harsh realities that children face when they leave their homes and embark on the difficult journey to the United States. It would be a great addition to any classroom library. It would be an excellent book to add to text sets about immigration or refugees. Teachers can also use this book to teach children about writing through difficult situations. It can also be used to show students how illustrations can enhance poetry as this book is beautifully illustrated.

To find Somos Como Los Nubes / We Are Like the Clouds, check your local public library, your local bookstore, or IndieBound. Also, check out Goodreads, Amazon, and Barnes & Noble.

ABOUT THE AUTHOR: Jorge Tetl Argueta is a celebrated Salvadoran poet and writer whose bi-lingual children’s books have received numerous awards. His poetry has appeared in anthologies and textbooks. He won the America’s Book Award, among other awards for his first collection of poems for children, A Movie in My Pillow. He was the Gold Medal Award winner in the 2005 National Parenting Publications Awards (NAPPA) for Moony Luna/Luna, Lunita Lunera. His other works for children include Xochitl and the Flowers, 2003 America’s Award Commended Title, Trees are Hanging from the Sky, Zipitio, Talking with Mother Earth, The Little Hen in the City and The Fiesta of the Tortillas.

ABOUT THE ILLUSTRATOR: Alfonso Ruano was born in 1949 in Toledo, Spain. He studied painting at the School of Fine Arts in Madrid. He has published about 20 books for children and has received multiple awards for his work.

2 comments on “Book Review: Somos Como Las Nubes / We Are Like the Clouds by Jorge Argueta”