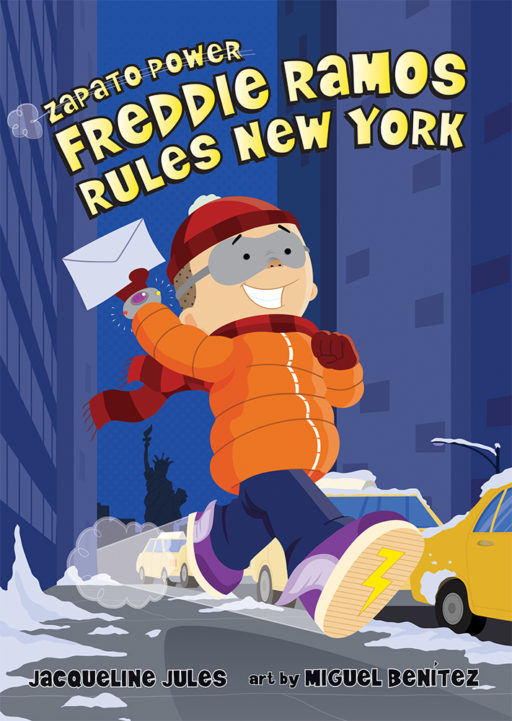 Once again, Jacqueline Jules has created a memorable, culturally relevant chapter book adventure with adorable illustrations by Miguel Benítez. Freddie Ramos Rules New York is the sixth book in the charming Zapato Power series, and this time around I read the book alongside my (then) six-year-old son, Liam Miguel. Before I tell you what he had to say, here’s how the publisher describes Freddie Ramos Rules New York:

Freddie and his mom are visiting Uncle Jorge in New York City! Just before they leave, Mr. Vaslov gives Freddie a new pair of zapatos to replace the ones that were getting too small. But Freddie worries if his new zapatos will work as well as his old ones. Will Freddie be able to save the day when Uncle Jorge misplaces an engagement ring in the middle of a New York City traffic jam?

My two cents: I’ve reviewed Jacqueline Jules’s work before for Latinxs in Kid Lit (check out my posts on Freddie Ramos Stomps the Snow and her Sofia Martinez series), and Freddie Ramos Rules New York possesses the same strengths, central among which is a gentle corrective to the tendency to focus on middle-class families in chapter books. In Freddie Ramos Rules New York, we get glimpse of what it means to stay with family when there isn’t much extra money to spare; Freddie sleeps in a sleeping bag on the floor, and meals are at home, not out in restaurants. Yet the loving support of family is a central theme of the books.

Liam Miguel hanging out with his little brother, Ethan Andrés.

Liam Miguel’s take: Liam Miguel was six when we read this book together. The level was just right for him to read on his own, but he let me join him since we wanted to do this review. He gobbled the book in about three nights. Here is a quick summary of what Liam Miguel said he liked about it:

Teaching Recommendations: Like the other books in the Zapato Power series, this book would make an excellent choice for classroom read-alouds with pauses to talk about situations, make predictions, evaluate characters’ decisions, and/or connect events in the story to students’ own lives. The series is also perfect for independent reading groups in the 1st-3rd grade range. Additional Zapato Power activities are available on Jacqueline Jules’s website here.

Bottom Line: This is a must-have addition to classroom and library shelves. In fact, I was thrilled to see a whole stack of Freddie Ramos Rules New York on my most recent visit to our neighborhood library.

Jacqueline Jules is the award-winning author of more than twenty children’s books, many of which were inspired by her work as a teacher and librarian. She is also an accomplished poet. When not reading, writing, or teaching, Jacqueline enjoys taking long walks, attending the theater, and spending time with her family. She lives in Northern Virginia.

Illustrator Miguel Benitez likes to describe himself as a “part-time daydreamer and a full-time doodler.” He lives with his wife and two cats in England.