Today, we’re excited to host the cover reveal for The Disturbed Girl’s Dictionary, a debut young adult novel by NoNieqa Ramos that has already gotten a starred review from Booklist and a glowing response from Kirkus.

What’s it about? Here’s the official description:

Macy’s school officially classifies her as “disturbed,” but Macy isn’t interested in how others define her. She’s got more pressing problems: her mom can’t move off the couch, her dad’s in prison, her brother’s been kidnapped by Child Protective Services, and now her best friend isn’t speaking to her. Writing in a dictionary format, Macy explains the world in her own terms complete with gritty characters and outrageous endeavors. With an honesty that’s both hilarious and fearsome, slowly Macy reveals why she acts out, why she can’t tell her incarcerated father that her mom’s cheating on him, and why her best friend needs protection . . . the kind of protection that involves Macy’s machete.

How could anyone resist a description that involves both dictionaries and machetes? What?!

Before we get to the cover, the author tells us how she responded to getting her Advance Reader Copies and viewing the cover for the first time.

I have to admit I didn’t open up my ARCs for two weeks. I hugged them. I #bookstagrammed them. I clutched them while flashbacking to all the work that led up to this moment. But what did opening the book mean? I had nightmares that opening my ARC would be like opening Pandora’s box. Because writing a book is like standing outside naked and not expecting anyone to comment on the fact that you have no space between your thighs. But then my soul mate made a comment. Apparently on the inside of the book, lay the real cover, the cover my protagonista Macy Cashmere made for her dictionary, and I thought, that sounds amazing. SOUNDS amazing. Time to crack it open. I peered inside the cover like you’d stare through a keyhole. I could almost feel Macy’s reaction as I did the unthinkable. Read the dictionary “By Macy Cashmere… FOR Macy Cashmere” without her permission.

The cover design by Lindsay Owens and Danielle Carnito is PSYCHEdelic; disturbing and hypnotic just like my Macy. A conduit for Macy’s rage, the imagery surges from page to page until the harrowing end. Thank you Carolrhoda Lab. Thank you, Lindsay and Danielle. Macy would approve.

Now for the cover reveal! 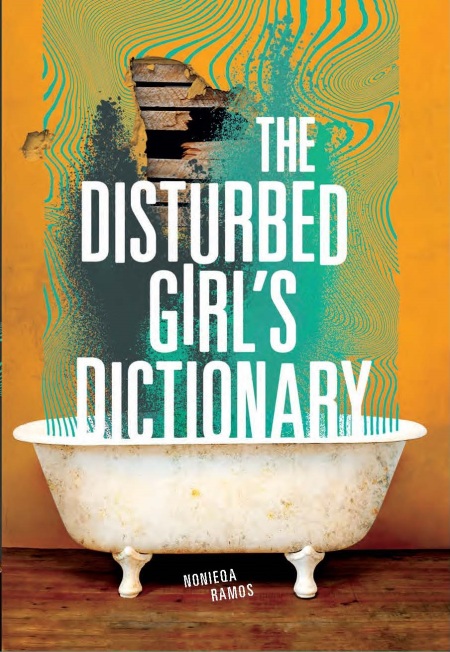 The Disturbed Girl’s Dictionary releases February 1, 2018 (Carolrhoda Lab). You can pre-order it at Indiebound, Amazon, and Barnes & Noble, among other places. You also have a chance to win a copy by entering this GoodReads Giveaway!

ABOUT THE AUTHOR: NoNieqa Ramos spent her childhood in the Bronx, where she started her own publishing company and sold books for twenty-five cents until the nuns shut her down. With the support of her single father and her tias, she earned dual master’s degrees in creative writing and education at the University of Notre Dame. As a teacher, she has dedicated herself to bringing gifted-and-talented education to minority students and expanding access to literature, music, and theater for all children. A frequent foster parent, NoNieqa lives in Ashburn, Virginia, with her family. She can be found on Twitter at @NoNiLRamos.