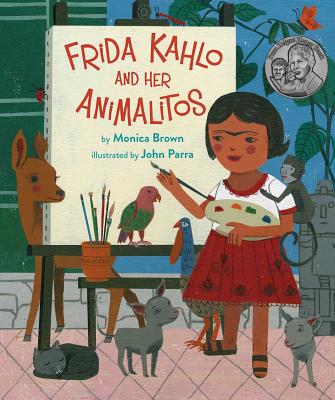 DESCRIPTION OF THE BOOK: Frida Kahlo and Her Animalitos, written by Monica Brown and illustrated by John Parra, is based on the life of one of the world’s most influential painters, Frida Kahlo, and the animals that inspired her art and life. The fascinating Mexican artist Frida Kahlo is remembered for her self-portraits, her dramatic works featuring bold and vibrant colors. Her work brought attention to Mexican and indigenous culture, and she is also renowned for her works celebrating the female form. Brown’s story recounts Frida’s beloved pets–two monkeys, a parrot, three dogs, two turkeys, an eagle, a black cat, and a fawn–and playfully considers how Frida embodied many wonderful characteristics of each animal.

MY TWO CENTS: Any story for children that involves a positive relationship with animals is captivating, and this story certainly is. It shows how animals played a supportive and nurturing role in Frieda’s life and also how they became her artistic muse. I enjoyed learning the names of her animals and about how she responded to the stresses of having to be bedridden at two separate times in her life by using imagination, creativity, and art to liberate her mind, find enjoyment, and express herself.

This book was published in both English and Spanish. Given that I like to read to my children in both languages, I often prefer having both languages accessible in one book. And, I can see the value in marketing to distinct audiences.  I experienced the Spanish language version as more layered and nuanced and that may be because Spanish is my second language, so I had to work harder and focus more to read it and, therefore, got more out of it.

The earth-toned illustrations by John Parra are a great accompaniment to the text and drew me into the story with ease, bringing the animals and characters to life.

At the end of the book, there is an Author’s Note that provides background information on Frieda and more information about her paintings and career as an artist. The book references Frieda’s close relationship with her father, who is described in the Author’s Note as German Hungarian. Throughout her life, Frieda described her father as Jewish, but neither the book, nor the Author’s Note mention this, which piqued my curiosity since, as a Latina Jew, that had been one of the things that drew me to Frieda Kahlo. In doing a small bit of research, it appears that a 2005 book traced her paternal lineage and concluded that she was from Lutheran stock. Yet, it wasn’t completely clear to me if that included a thorough examination of her paternal grandmother, Henriette Kaufman’s lineage. Regardless, it remains curious as to why Frieda talked about her father as Jewish. Various commentators have opinions on this issue. I did learn that she changed the spelling of her name to include the “e” during World War II, so that the spelling would more closely resemble frieden which is the German word for peace.

TEACHING TIPS: The first thing that came to mind when I read this book was the image of all young readers demanding that their parents buy them a monkey! From a teaching perspective, this presents a wonderful opportunity to discuss the history of animal rights, the distinction between domesticated and wild animals, and the importance of animals being in a habitat that promotes their long-term survival. While Frieda loved all her animals, her “domestication” of a fawn and a pair of monkeys should be stressed as something unique and not to be emulated, especially because any naturally wild animal that becomes domesticated is typically not able to return to the wild successfully.

I see a second opportunity to engage in a classroom discussion about support animals (Emotional Support Dogs/ESDs, Mental Health/Psychiatric Service Dogs, Therapy Dogs, Guide Dogs for the visually impaired/blind) and how animals are used in various ways to help people.

In the U.S., it is estimated that 44% of all households have a dog and 35% have a cat. This statistic could be used to launch a conversation about why people have pets and what role pets play in our lives. For older children, this discussion can lead to the role that zoos play in society and a debate about the pros and cons of zoos.

Some 2017 resources include the film A Dog’s Purpose (for children/teens). For teachers, reading the book The Zookeeper’s Wife or seeing the 2017 movie adds an interesting angle to zoos. The new release The Dogs of Avalon (August 2017) expands the conversation about animal rights and justice.

Another route to explore is Mexican art and the role that both Frieda Kahlo and Diego Rivera (who is referenced in the book) played in shaping the field through their contributions as painters. As a creative activity, it might be fun for children to do self-portraits with pets they have and/or with animals they like (the latter for children who don’t have pets).

WHERE TO GET IT: To find Frida and Her Animalitos, check your local public library, your local bookstore, or IndieBound. Also, check out Goodreads, Amazon, and Barnes & Noble.

Click on the image below to see the book trailer!

ABOUT THE AUTHOR: Monica Brown, Ph.D., is the award-winning author of Waiting for the Biblioburro/Esperando al Biblioburro, Marisol McDonald Doesn’t Match/no combina, and the Lola Levine chapter book series, including Lola Levine is Not Mean, Lola Levine, Drama Queen, and Lola Levine and the Ballet Scheme. Her books have garnered starred reviews, the Americas Award, two Pura Belpré Author Honors, and the prestigious Rockefeller Fellowship on Chicano Cultural Literacy. She lives in Arizona with her family and teaches at Northern Arizona University. Find out more at www.monicabrown.net.

ABOUT THE ILLUSTRATOR: John Parra is an award-winning illustrator, designer, teacher, and fine art painter. His children’s books have earned many awards including, the SCBWI Golden Kite Award, ALA’s Pura Belpré Honors, The Christopher’s Award, the International Latino Book Award, and many more. In 2015, John was invited by the Metropolitan Museum of Art in New York to present a special event about his work and career in art and illustration and in 2017 John’s art will be seen on six new Forever Postal Stamps from USPS titled: Delicioso. He currently lives with his wife Maria in Queens, New York. John graduated from Art Center College of Design in Pasadena, California. Visit him on the web http: //www.johnparraart.com/home.htm, or follow him on twitter @johnparraart.

ABOUT THE REVIEWER: Maria is a writer, workshop leader and coach who facilitates The Butterfly Series, a writing and creative arts workshop for women who want to explore what’s next in their life journey.  In December 2016, she won 1st place in the 2016 Intergenerational Story Contest for her piece, Family Recipes Should Never be Lost.  Her work has appeared in the Apogee Journal, Entropy Magazine, and A Quiet Courage.   Her piece Meet me by the River will be published in Deborah Santana’s forthcoming anthology All the Women in my Family Sing (Jan 2018) http://nothingbutthetruth.com/all-the-women-in-my-family-sing/.  She is a trainer with Rockwood Leadership Institute www.rockwoodleadership.org and a member of the Bay Area chapter of Write on Mamas.  For more information, visit her website at www.mariaramoschertok.com

CLICK HERE TO ENTER OUR GIVEAWAY. YOU COULD WIN FRIDA AND HER ANIMALITOS IN ENGLISH OR SPANISH!

6 comments on “Book Review: Frida Kahlo and Her Animalitos by Monica Brown, illus. by John Parra”