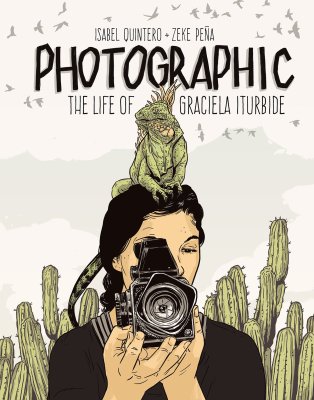 DESCRIPTION OF THE BOOK: “I see reality in another way with a camera. Looking through the lens, I peer into another world…”

Born in Mexico City in 1942, Graciela Iturbide wants to be a writer, but her conservative family has a different idea. Although she initially follows their wishes, she soon grows restless. After tragedy strikes, she turns to photography to better understand the world. The photographic journey she embarks on takes her throughout Mexico and around the globe, introducing her to fascinating people and cultures, and eventually bringing her success and fame. With more than two dozen photographs by Iturbide herself, Photographic explores the question of what it means to become an artist.

MY TWO CENTS: Photographic is a lively and compelling celebration of the life and work of critically acclaimed Mexican photographer Graciela Iturbide. Young readers and fans of nonfiction graphic novels will devour it. I certainly did. Written by poet-novelist Isabel Quintero and illustrated by Zeke Peña, this slender graphic novel from Getty Publications tells its stories through an arresting blend of text and photocomics. Not many graphic novels attempt Photographic‘s approach—that is, placing reproductions of Iturbide’s camerawork alongside Peña’s pen-and-ink drawings. Then again, Photographic is no routine examination of an artist’s life. Guided by Quintero’s lyrical narrative, it also offers a powerful and disarming time capsule of Mexico’s cultural and social glories, as encountered by Iturbide during her photographic journey.

Photographic‘s pictorial narrative crisscrosses decades, allowing readers to peer through Iturbide’s lens as she traverses the geographic spine of Mexico, ventures across the border into Latinx communities in the United States, and on to international settings. The story flows from present-day views of Iturbide to flashes of her youth, when her father buys her a Brownie camera. It resumes in young womanhood, as she studies under photography master Manuel Álvarez Bravo. From there, we witness the continuing evolution of the artist as she undertakes a series of photographic projects.

Iturbide possesses a selective eye, one that ennobles the disregarded and humble. This is most evident in her deeply humanizing portraits of people found along the margins of society. Such subjects include young men in Tijuana whose tattooed bodies read like a codex, as well as Juchitán’s “muxes, who are both men and women at the same time,” as Quintero explains in the text.

Iturbide’s range of subjects is wide. She occasionally photographs mammals and reptiles, but birds dominate this area of interest. In her photos, they appear singly and in flocks, on perches and in flight, as living creatures and as dusty, feathered bodies. Echoing this passion, Quintero skillfully adopts avian motifs to express some of the most elusive aspects of Iturbide’s photographic instinct.

Each time I look through the viewfinder I see myself…

I use my bird sight to see the fragments. The camera as mirror as bird eye.

And I with eyes to fly.

I look to the skies.

Birds like shifting stars and all of them speaking to one another—telling different stories. Wings spread and reverberate until silence.

Although Iturbide resists being labeled magical or surrealist, her art unquestionably plays along the edges of reality. Even when photographing everyday objects, the images she captures teem with mystery and questions. A notable example is her work at Casa Azul, the house of Frida Kahlo and Diego Rivera. There, in the bathroom, which was sealed after Kahlo’s death for fifty years, Iturbide’s camera brings our attention to porcelain fixtures, detached leg braces and corsets. Although composed of ordinary objects, these tableaus wordlessly communicate Kahlo’s physical suffering and bring into sharper relief the triumph of her immense contributions.

Iturbide’s portraits of uncelebrated women are among her greatest achievements. In one striking photograph, four young women from East Los Angeles pose in front of a mural devoted to Mexican revolutionary and political figures Zapata, Juárez, and Pancho Villa. In their defiant expressions and unapologetic stances, these women testify to the subversive spirit that lives on in their community. Even more startling is Iturbide’s documentation of Juchitán, a city in Oaxaca whose inhabitants are chiefly Zapotec, and where for generations, women have called the shots. “In Juchitán, women drive commerce, and men ask for an allowance.” Out of this matriarchal setting comes one of Iturbide’s most unforgettable photographs, a portrait of a market vendor wearing a crown of live iguanas. Zobeida, as she is identified, is rendered mythical, regal, an image for the ages, La Medusa Juchiteca. Yet Zobeida is a flesh-and-blood woman, making a living selling her wares and not anyone seeking immortality as a goddess. Iturbide’s camera lens frames these dual realities. She has learned how to see what many others miss— a reflex she cannot help but exercise in one after another iconic photograph.

And now, Photographic has brought Iturbide’s empathetic, ennobling, and powerful art to young readers and fans of the graphic novel. It’s no small order to synthesize a lifetime of artistic growth and achievement, but this book delivers, thanks to the wonderful collaborative work of Isabel Quintero and Zeke Peña, who are impressive artists in their own right, with rich futures in their respective fields.

TEACHING TIPS: For middle school or high school, Photographic could be used as a supplementary text for the study of Latinx/Mexican culture and sociology, as well as in biographical examinations of artists and their working methods.

In addition to its broader classroom potential, Photographic suggests fresh approaches to the teaching of photography. Borrowing from themes found in its pages, here are some shooting assignments to consider: 1. Go on the hunt for a naturally occurring still life (not staged). 2. Locate a striking landscape or urban-scape that most people would pass by without noticing. 3. Scour your world for intriguing human faces—not necessarily pretty ones—and take care to photograph them with respect and dignity. 4. Include a self-portrait. For inspiration, examine Iturbide’s revelatory photos of herself, which offer strong and original counterpoints to the superficial selfie.

In addition, every frame of Iturbide’s work demonstrates principles of design and composition. Ask students to study her photos for their use of negative space, symmetry, asymmetry, minimalism, close ups, and judicious cropping—then have them pull out their cameras and emulate.

Finally, the wonderful teaching blog Vamos a Leer has published a preview of Photographic, which includes links to many resources, including interviews with Isabel Quintero and Zeke Peña. Don’t miss it!

ABOUT THE SUBJECT: Graciela Iturbide lives and works in Mexico City, where she was born. Her photography enjoys worldwide acclaim and has received major international prizes. It is often the subject of solo exhibitions at heralded art centers, such as the Philadelphia Museum of Art, the Paul Getty Museum, and the Centre Pompidou. Learn more about Iturbide’s life and view galleries of her work by visiting her official website.  Photo by Christopher Sprinkle

ABOUT THE AUTHOR: Isabel Quintero is a poet and novelist of Mexican heritage, born in California. She is best known for her trailblazing Gabi, a Girl in Pieces (Cinco Punto Press, 2014), winner of the 2015 William C. Morris Award for YA Debut Novel and many other distinctions. It was reviewed on Latinx in Kid Lit by Sonia Alejandra Rodriguez. Follow Isabel’s writing journey on her blog.

ABOUT THE ILLUSTRATOR: Zeke Peña is a comics artist and illustrator from El Paso, Texas. Among his many book covers, Zeke is the artist behind the powerful cover of Gabi, a Girl in Pieces. Explore his illustration and painting galleries at his website.

ABOUT THE REVIEWER: Lila Quintero Weaver (no relation to Isabel Quintero) is one of the founding bloggers of Latinxs in Kid Lit. She wrote and illustrated a graphic memoir, Darkroom: A Memoir in Black & White, and will release My Year in the Middle, her first children’s book, on July 10, 2018. Learn more about her work here.

4 comments on “Book Review: Photographic: The Life of Graciela Iturbide”