Today, we’re thrilled to introduce you to Tony Piedra, a former film animator who worked on several awesome Pixar movies, including the Oscar-winning Coco! Tony will have his debut picture book released by Arthur A. Levine Books later this year. Before we get to the Q&A, here’s some background information on the author-illustrator: 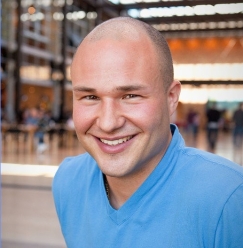 From his website: In a previous chapter of my life, I was a Sets Technical Director at Pixar Animation Studios. For nine years, I collaborated with some of the most talented artists and storytellers in the world to help realize the environments in films, such as, Up, Cars 2, The Good Dinosaur, Inside Out, and Coco, as well as several of Pixar’s short films, including The Blue Umbrella. Now, I am taking the skills and experiences from my time working in the film industry and putting them to use as an author and illustrator of children’s books. My debut picture book, The Greatest Adventure, will be released Fall 2018 through Arthur A. Levine Books an Imprint of Scholastic Inc.

Now, here’s a brief description of The Greatest Adventure:  Eliot imagines sailing wild rivers and discovering giant beasts, right there on his block. But he wishes his adventures were real. Eliot’s grandpa, El Capitán, once steered his own ship through dangerous seas, to far-off lands. But he can’t do that anymore. Can Eliot and El Capitán discover a real adventure… together? Come find out All aboard The Greatest Adventure.

Now….here is the beautiful cover of the book, which releases September 11, 2018. 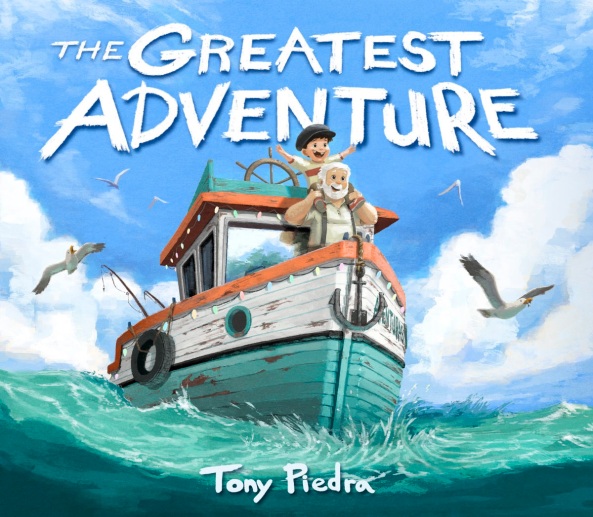 ALSO, CLICK ON THE LINK TO GET A GLIMPSE OF THE INSIDE ART: Greatest Adventure

Q. What picture books do you remember from when you were growing up? Are there any stories or artists that were especially meaningful or inspirational for you?

A. In a bright red building I affectionately remember as the “Red Library,” I discovered a book called Album of Sharks, illustrated by Rod Ruth and written by Tom McGowen. This book left such a vivid impression on my mind due to Ruth’s striking full page illustrations, that over 20 years later, when I tried to locate a copy of the book with absolutely no information other than my childhood memories, I was able to do so because I remembered each and every one of Ruth’s illustrations so clearly. I find it funny how at such young age we are intrinsically drawn to certain subjects, and for whatever reason I was then, and still am, drawn to sharks. I love the danger, mystery, and wonder they conjure in my mind, and Ruth’s illustrations captured this in a way that no photo has ever been able to do.  Later I learned that Rod Ruth and Tom McGowen paired up on over a half dozen “Album of” books, each beautifully illustrated, and I imagine, entertainingly written—I wasn’t such a good reader back in those early days.  As an homage to Album of Sharks and more specifically as a small, but deeply felt thank you to Rod Ruth, I inserted a token of admiration for one of Ruth’s most memorable paintings in my debut picture book, The Greatest Adventure. 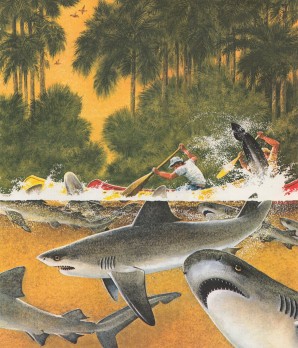 Q. What are your favorite art materials to work with? How much (if any) of your process is digital?

A. Just give me a pencil and some white computer paper, and I will be distracted working for hours. These have been my default materials since the beginning. I dabble with gouache, acrylics, and oils, but they are not my natural mediums. If I need to do some thinking or planning there’s nothing better than pencil and paper. I followed that same practice on The Greatest Adventure. Throughout the planning and dummy stage of this book I solved compositions and decided on scene staging with these simple materials and time. All the heavy lifting happens at this humble stage. When I’m finally satisfied with a composition and ready to do a final illustration, I scan in the sketches and begin the meticulous process of painting them digitally in Photoshop.  My final paintings are 95% digital with subtle touches of texture scanned in from traditional media.

Q. You’ve come to picture books from animation (congratulations on Coco’s many wins!). How is the artistic process for the two kinds of storytelling similar or different? Are there any secrets about Coco (or Pixar in general) you can share with us?

A. Thank you for the congratulations. Coco represents the final year and a half of my career at Pixar, and I’m very proud of the film, and the work I helped bring to the screen, namely the cemetery in Miguel’s hometown of Santa Cecilia.

Fundamentally, the process of creating a picture book and an animated film are very similar in that both mediums require a team of individuals to bring to life a story and world that had never existed before. Where they differ most strikingly is in the number of individuals per team and their level of specialization. Picture book-making, though clearly a team effort, does not require an army of individuals at the creative stage. Much of the work is realized by the author and illustrator in collaboration with the editor, designer and production team. And so, in general terms, the publishing team is smaller and the skillset of each individual on that team fairly broad when compared to the specialization required in producing a computer-generated film. A typical Pixar film employs 250-300 highly-specialized people to collaborate on a singular vision. Just to give you an idea of how specialized the work on these films is, there are specialists known as “groomers,” whose sole responsibility is to create hair, and trust me this is a full-time job, especially, when you’re trying something as innovative as the wild, red locks of Merida in Pixar’s Brave, or you’re styling the hair for an entire town as was required in Coco. Imagine the equivalent in the picture book world, an illustrator who only draws hair!

My area of expertise is called Set Dressing. It is not too different from interior decoration. Think of how interior decorators bring rooms and homes to life with their choices of color and arrangement of decor. There is, however, one key difference: the set dresser’s goal in arranging objects on a film is to reveal aspects of the characters through their environment, which requires a great deal of story specificity. Think of a college dorm room versus the bedroom of someone who is obsessively organized. How would these rooms be arranged differently? What would each room say about its owner’s character? The answers to these questions are provided by set dressing. My work on Coco required the careful arrangement of flowers, candles, and foods on the graves which made up the cemetery in the film. These ofrendas were arranged to show the love and respect family members paid to their deceased relatives on Día de los Muertos. It took me nearly a year and a half to set dress the entire cemetery, and this is but one part of the process required to bring to screen one scene in the film.

Q. What are some books you’re looking forward to from Latinx creators? These can be picture books or chapter books.

I have admired the work of Julia Sardá for many years. Her work is primarily known in Europe, but I think that she is one of the most talented children’s book illustrators out there today. Somebody please bring her to the American children’s book market! I’m also excited to see what comes next from Lorena Alvarez, a Colombian children’s book author and illustrator, whose exciting work I came across last year with the release of Night Lights published by Flying Eye Books.  I also just discovered JOAN PROCTOR, DRAGON DOCTOR: The Woman Who Loved Reptiles written by Patricia Valdez and illustrated by Felicita Sala. The book was recently released and it speaks to me both through Felicita’s beautiful illustrations and the subject’s love of lizards, which I can completely relate to. I can’t wait to get my hands on it!

Q. What do you want your next great adventure to be? Is there anywhere you want to travel to or wonders you’d like to see?

At the beginning of last year, I wondered the same thing: what would be my next adventure? I had just left Pixar to pursue a full-time career in children’s books, and one of my goals outside of finishing up my first book was to find ways to travel the world as an independent artist. For the longest time, I had admired how my best friend’s sister had managed to see so much of Europe and South America with the help of playwright grants. So naturally, I figured somebody for some reason must need an author/illustrator to go to the rainforest! I then stumbled upon an artist-in-residence program called Voices of the Wilderness.  This residency sponsored by the U.S. Forest Service brings artists of all sorts to remote areas of Alaskan wilderness to witness their beauty and share the importance of conserving these wild corners with the American public. I applied for the residency and a few months later found myself standing in the rain on Admiralty Island, a 1,500 square mile rock covered in a swath of temperate rainforest and home to the greatest concentration of coastal brown bears in the world. This was not the adventure I had envisioned; it was grander. And this island and one bear in particular on it have become the centerpiece of my next story for children. Where next?  Who knows!