Earlier this week, we published a review of Diary of a Reluctant Dreamer: Undocumented Vignettes from a Pre-American Life. Today we are pleased to present a guest post by the author-illustrator.

From 1989 to 1996 I attended graduate school at UC Berkeley. During my last four years in the Ethnic Studies doctoral program, I spent almost every day studying the ways that undocumented immigrants had been represented in Mexican American novels and short stories. I read hundreds of pieces, dozens of novels and many, many short stories—the works themselves and the literary criticism that had been written about them—all in an effort to understand what role undocumented immigrant characters and stories played in the larger world imagined by Mexican American authors. I had pursued this project because of my own experience as a previously undocumented student. It’s funny how our own biographies sometimes compel us to seek answers to questions about ourselves, right?

Being undocumented had had such a profound impact on the shaping of my and my family’s cultural identities that I was eager to understand the many ways that that experience had also been represented in the collection of books and stories contained by Chicano literature. But, in the late 1980s and early 1990s, when I was in graduate school, there seemed to be few works that placed undocumented characters as the protagonists of their stories. This confused me, because I knew that there were millions of undocumented people living in the same neighborhoods like the one where I grew up. And I knew that several million undocumented immigrants had just gone through the federal amnesty process that my family and I had just gone through. Surely, I thought, some Mexican American authors must have written stories that focused on experiences like mine.

For the most part, my interest in exploring undocumented stories remained undaunted during the mid 1990s. And though the days that I spent working on my dissertation were long, often starting at the crack of dawn and ending only once the library at UC Berkeley closed, I was driven by a strong desire to show that undocumentedness was another kind of Mexican “American” experience and that it deserved to be told within the corpus of books we now called Chicano literature. In the end, however, after I finished my dissertation and published a number of articles connected to it, that scholarly dialogue that I was hoping to initiate about the role of undocumented immigrant experience within Chicano literature did not seem to want to take off. Still, I taught classes focusing on immigrant subjects, attended many literary conferences where I made impassioned presentations about the importance of incorporating undocumentedness as an important interpretive lens within the field of Chicano letters, and while I was heartened by the emergence of Gloria Anzaldúa’s Borderlands theory and analytical focus, it seemed that undocumented ways of knowing would remain largely absent from Chicano literary studies. So it was that after attending a major conference in Zacatecas, Mexico, in the late 1990s, and after noticing that once again I seemed to be the lonely voice in the wilderness, that I decided to take a break from my research while I raised my infant daughter.

That break ended up lasting eighteen years as I moved from teaching and research to doing college administrative work. As the years passed I thought that I had left my project behind; however, in 2012, while I was teaching a Summer Bridge class as part of my responsibility of being an administrator at Berkeley’s Student Learning Center, something magical happened—the Undocumented Student Movement emerged and it placed the concern over undocumented immigrants at the heart of Latinx studies. Throughout the country, undocumented students were participating in marches and protests, all in an effort to get the US Congress to pass the Dream Act. Some students had gone to protest President Barack Obama during the Democratic National Convention. Some initiated sit-ins at senator offices. And eventually, as a result of all their efforts, the Obama Administration created the Deferred Action for Childhood Arrivals policy (DACA), a policy that permitted undocumented immigrants who had been brought to the US as children to attend college and work.

The creation of the DACA policy inspired me to return to the questions I had about what being undocumented meant in the United States. But, instead of writing more essays about this issue, I decided to draw cartoons instead. It all happened because of that Summer Bridge class I was teaching when the undocumented student movement exploded across the United States. Though I was excited about doing a lecture about the undocumented student movement, my students had expressed a frustration with the amount of work that I had already assigned them. So, in order to pique their interest, I tapped into and old and neglected talent and drew a quick sketch of “A Day in the Life of an Undocumented Student.” Though my students had complained about all the work that they had had to do, I noticed that many of them began doing research on the movement on their own. So, I sketched other cartoons and shared them via Facebook. All of the sudden, I began getting hundreds of friend requests and they began asking me to draw more cartoons, to share my experience though art. After several years of doing so, of drawing vignettes based on my undocumented life, I had the makings of a book.

You might wonder why I, as a trained literary scholar in this field, decided to do something for which I had no training at all? Interestingly, it was only after I started doing cartoon sketches about my undocumented heritage that that the conversation that I wanted to get started actually occurred. What changed? Why did it my cartoons elicit a reaction that my scholarship did not? I think that the main reason my cartoons hit the nerve that my essays and stories could not do had everything to do with the form. As the saying goes, “a picture is worth a thousand words.” Here, I was creating visual essays, communicating the same ideas I had been researching, with the cartoons I was crafting. I realized that the young people who responded to my cartoons were also more accustomed to consuming visual text. Snapchat, Facebook, emojis, all of these had developed in them literacy skills for quickly digesting ideas in images.

It did not take me long to understand that my cartoon memoir was also effective because of its flexible narrative form. I did not have to assume a stuffy authorial voice to maintain my credibility. In my cartoons the fourth narrative wall was pliable; I could as easily be an overeducated omniscient narrator as I could be a vulnerable first-person witness to the same story without jarring the viewer. And yet, because my assumption was so strong that the only way my undocumented story could be accepted was if it came from an overly academic point of view, I had not even considered cartoons as a serious tool for inquiry. All those years of academic training that I had received in graduate school had led me to believe that the only option I had for sharing my undocumented experience was through dense textual analysis.

Today, when I attend important lectures and I am really into what the speaker is saying, I don’t take traditional notes. Rather, I take out my sketchbook, my favorite fountain pen, and I start doodling. I judge the quality of a talk by the complexity of the sketches I produce. Indeed, now that I have done a bit more research on it, I have learned that cartooning is an effective form of communication: it allows for better mental digestion of complex ideas; engages multiple intelligences; and, it allows viewers of an image to understand a story from multiple lenses. It is because of this that cartooning has allowed me to communicate the fears I felt when I was undocumented much more effectively than my writing ever could. This is the reason why I created my illustrated memoir, Diary of a Reluctant Dreamer. 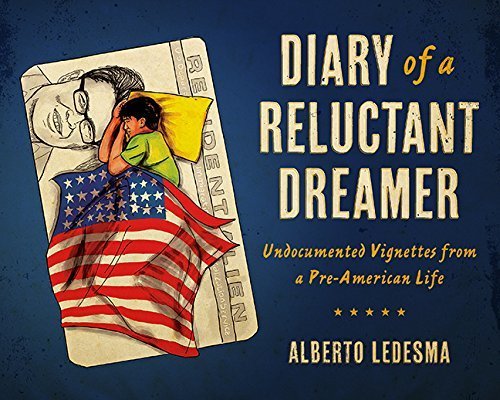 And yet, there is only so much my little book can do. The xenophobic program that is now aiming to persecute undocumented immigrants is all too real. This program, however, is not just aimed at undocumented immigrants. The attack on undocumented immigrants is just but the most obvious aspect of what seems to be a larger policy that has taken aim at the heart of what used to be an American progressive democracy—the social infrastructure that, as a result of the labor organizing and social activism of the ‘30s to ‘60s, increased access to education, health care, and legal protections for all working class and poor people. My belief is that working class and poor people of all ethnic backgrounds now need each other more than ever and that we cannot let false debates based on false moralisms distract us from our common humanity. To view undocumented immigrant experience in the US as a totally unredeemable experience that needs to be excised without mercy is to buy into a false equivalency that has already stopped us from discerning what is lawful versus what is just.

One comment on “Doodling as Activism: How I Produced My Diary of a Reluctant Dreamer”