The picture book Maybe Something Beautiful: How Art Transformed a Neighborhood, written by F. Isabel Campoy and Theresa Howell, and illustrated by Rafael López, was published in 2016. Based on a true story about a community art initiative led by Rafael López and his wife, graphic designer and community leader Candice López, the book received rave reviews, won the 2017 Tomás Rivera Book Award, and made our 2016 Favorite Latinx Books list. This inspiring tale, along with its vibrant illustrations, provides tremendous inspiration in the realm of literacy, community, and arts education. Its impact on youth makes it a resource toward engagement and collaboration for teachers, librarians, and community organizers. As a youth librarian, I used Maybe Something Beautiful for a Día de los Niñxs/Día de los Libros program and wrote a post about it, entitled Día Art Bilingual Story Time!

Last March 2018, a Spanish edition was published under the title Quizás algo hermoso: cómo el arte transformó un barrio. This text is not a translation of the English edition, but a new, original text by F. Isabel Campoy. We had the opportunity to chat with Isabel about Quizás algo hermoso, and we also asked about her work in children’s books and how she stays inspired. 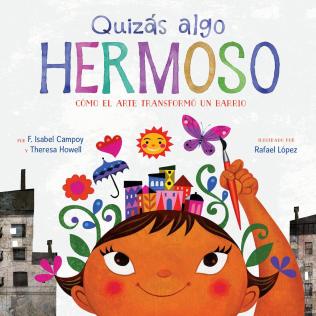 You’ve been publishing children’s books for years. What inspires or fuels you to keep publishing English, Spanish and bilingual titles for our little ones?

The adults who surround the first ten years of any child have complete influence in the development of their intellectual capabilities. The language they hear, the type of interactions they have with their surroundings, the number of experiences they are exposed to, all these are cornerstones in the foundation of their lives. Books do not substitute lived experiences, but they are great complements to them. If a child is read in the language they hear at home. If a child looks at illustrations that invites them to new landscapes, cities, monuments, or people. If children are presented with positive experiences, feelings or actions, those children will grow richer, more capable, more alert and open to learning. That is what fuels me to keep publishing in Spanish, and in English. To give children MORE. More language, more knowledge, more joy. More is always MORE. And children have the amazing ability to build up big brains if we offer them the possibility of learning.

When I was a child, there were very few books published for children, and the ones available had just a few illustrations in black and white. But I had the great fortune to have a father who was subscribed to the National Geographic Magazine since 1940. Those magazines saved me, fueled my imagination, and planted the seed in my heart for knowledge. When I recently published “Alegría, poesía cada día” with National Geographic Magazine I felt that a 70-year circle had been completed. What a joy that was!

I want children to dream the way I did. Very fortunately the book industry now offers many opportunities for great reading experiences.

In 2016 Maybe Something Beautiful: How Art Transformed a Neighborhood published to rave reviews. This year, we have a Spanish edition titled Quizás algo hermoso: cómo el arte transformó un barrio. Why did you choose to write a new, original Spanish text instead of providing a bilingual edition or direct translation?

If you are a balanced bilingual, when you write, in whatever language you are writing, you are being an original writer in that language. Quizás algo hermoso and Maybe Something Beautiful express the same idea in two languages. My co-author Theresa Howell and I worked the manuscript in English for almost three years! Every comma was measured, every expression, every interjection was pondered— while simultaneously I was building its parallel in Spanish. It is a lot of fun!

When a child reads a book, they must find a flawless use of that language, natural expressions, high command on part of the author of the grammar and syntax, a natural flow of meaning. Those are the components of an authentic text.

I wish all children had the opportunity to read and speak more than one language.

All countries in Latin America have speakers in more than one language. In the case of Mexico, for example, over 50 languages other than Spanish are spoken. I find that to be a cultural treasure!

How has the reaction been to both versions of the book by adults and children?

When we chose to write this manuscript, we had one goal: to share a positive community action with readers anywhere. The example set by Rafael and Candice López in San Diego was born out of a true desire for transformation, and they succeeded beautifully. Art was the means and solidarity was the goal. Their example is now being replicated in many places in this country. Rafael’s brushes are magic wands and the world is his canvas!

We have received letters from teachers and their students telling us about how they reacted to the book. There have been real murals painted, and murals on huge brown paper covering school hall walls. There have been little altars with suggestion boxes on how each child imagines the transformation of their environment through art. We have seen pictures of painted river rocks creating paths in gardens, and little paintings, like Mira’s, attached to fences. It is extraordinary what children can imagine, and it is enlightening to listen to them!

Adults have found in this text an example that can be replicated in their own corners of the world. And they are doing it!

Can you talk about the importance of having this story available in Spanish? Do you plan to publish it in other languages?

A couple of months ago we had the great news that the book had been translated into Chinese! That would add at least 300 million possible readers to our book! We are very happy.

I wanted to see this book in Spanish from day one. We were very happy to see it finally printed. The community that the book reflects is a picture of life in many places in the United States. Muralism is a vibrant reflection of Hispanic art. Three internationally known painters in Mexico: Rivera, Orozco and Siqueiros, brought murals to the forefront of artistic expression. Their palette and what they chose to paint reflected the people and the history of Mexico. Writing a book about murals was also paying homage to the lives of our communities, as diverse and multicultural as they are everywhere.

Quizás algo hermoso can now be read by parents as well as children whose first language is Spanish. But also, by English-speaking children who are in Dual Language Programs. It is certainly beautiful to see how many more children are becoming bilingual. The two largest languages in this continent, English and Spanish, are embracing each other, providing a better path towards understanding for the new generations.

In your travels, have you seen vivid examples of mural painting that speak to the spirit of a community?

I am drawn to all forms of art. My first visit in every city is to its museums, art galleries, and monuments. In the United States there are famous cities with great murals—for example where I live, in San Francisco. They all depict life in the neighborhood or pride on the diverse cultures of the city. Philadelphia is famous for its murals, and Albuquerque now has miles of fantastic paintings all over the city’s walls. In a book I co-authored with Alma Flor Ada entitled Yes, We Are Latinos!, a book about diversity within the Latino culture, I wrote about the Tower in the Hispanic Cultural Center in Albuquerque, painted by Frederico Vigil. That tower is a fabulous historic overview of Latinos.

Also abroad, from El Cairo to London, from Rome to Barcelona, murals are a part of the richness we can find everywhere in the world. You can see some examples on the website for Maybe Something Beautiful www.maybesomethingbeautiful.com.

If you could paint something beautiful, what would it be and in which barrio?

When my friend and children’s book author René Colato Laínez asked this question, I answered: A tree!

Because like them, we have roots that hold us firm in our culture and language, in family and knowledge. Like them, we have a cycle of life, fruits for new generations. Our branches hold the joy of growth; our leaves, the beauty of seasons.

Where is that brush… I’ll start right now!

And about the barrio…. do I need to choose one? Could it be one in every neighborhood where there are people like Rafael and Candice López, ready to transform their reality into something really beautiful?….. Allow me to dream that it is possible!

Thank you very much for inviting me to share with your readers. ¡Un enorme y hermoso abrazo, F. Isabel Campoy! 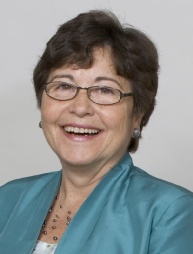 About F. Isabel Campoy: Isabel is the author of over 100 children’s books. She is a recognized scholar devoted to social justice and to promoting diverse books in diverse languages. Isabel is the recipient of the Ramón Santiago and Tomás Rivera Awards, among others. She is a member of the North American Academy of the Spanish Language. www.isabelcampoy.com

About Sujei Lugo:  a former elementary school librarian in Puerto Rico, is a children’s librarian at the Boston Public Library, Connolly Branch. She holds an MLIS from the University of Puerto Rico and is currently a doctoral candidate in LIS at Simmons College, focusing on anti-racism and children’s librarianship. She is an active member of REFORMA, ALA and ALSC (newly minted Board of Directors member). Sujei served on the 2018 Newbery Award Committee and as co-chair of the 2018 ALSC Charlemae Rollins President’s Program. A member of the We’re the People Summer Reading Project. Twitter: @sujeilugo