Today we are thrilled to share the cover of Juana & Lucas: Big Problemas by Juana Medina!

Juana Medina’s Juana & Lucas, the abundantly illustrated story of a young Colombian girl and her beloved dog, received wide acclaim (and a Pura Belpré Award) when it was published in 2016, with critics praising Medina’s playful interweaving of Spanish and English words, text, and images. Now Juana will return in Juana & Lucas: Big Problemas, due out in May 2019 from Candlewick Books. A description of the new book and the exclusive cover reveal are below!

When her mami meets someone new, Juana worries that everything will change in a humorous, heartwarming follow-up to the Pura Belpré Award–winning Juana & Lucas.

Juana’s life is just about perfect. She lives in the beautiful city of Bogotá with her two most favorite people in the world: her mami and her dog, Lucas. Lately, though, things have become a little less perfect. Mami has a new hairdo and a new amigo named Luis with whom she has been spending a LOT of time. He is kind and teaches Juana about things like photography and jazz music, but sometimes Juana can’t help wishing things would go back to the way they were before. When Mami announces that she and Luis are getting married and that they will all be moving to a new casa, Juana is quite distraught. Lucky for her, though, some things will never change — like how much Mami loves her. Based on author-illustrator Juana Medina’s own childhood in Colombia, this joyful series is sure to resonate with readers of all ages.

And now for the cover reveal! 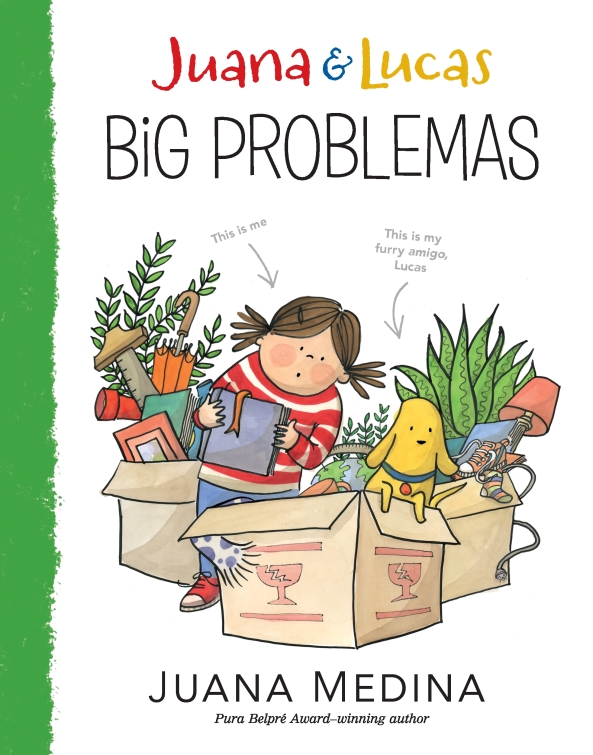 About the author: Juana Medina is a native of Colombia, who studied and taught at the Rhode Island School of Design. Her illustration and animation work have appeared in U.S. and international media. Currently, she lives in Washington, DC, and teaches at George Washington University. As a children’s illustrator, she has received wide acclaim and significant honors, including the 2017 Pura Belpré Medal for Juana & Lucas. Please don’t miss our studio visit with Juana! See more of her  work at her official website.

One comment on “Cover Reveal of Juana & Lucas: Big Problemas”