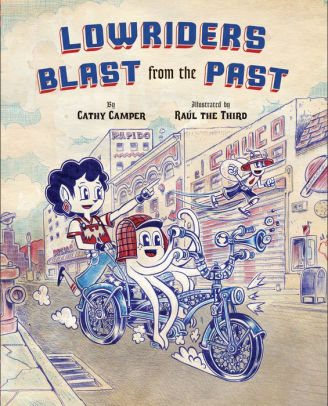 DESCRIPTION OF THE BOOK: When new friends Lupe, Flapjack, and Elirio are each bullied by Los Matamoscas, they know they’re going to like one another. When they find out they all love lowrider cars, they know they’ll be friends for life. But the bullies won’t leave the Lowriders alone—and they don’t let any girls or babies into car clubs. Can these three determined outcasts prove they deserve to be in the car show? Humor, Spanish words, and lowrider culture come together in this heartwarming graphic novel of three friends navigating the bumpy terrain of friendship, bullying, and standing up for what you believe in.

MY TWO CENTS: The third book in Cathy Camper and Raúl the Third’s wonderful Lowriders graphic novel series may seem at first to break with the genre of the previous installments by giving us an origin story, but the series has already established itself as genre-bending, going from sci-fi to mythological adventure. A bit of historical fiction seems to fit nicely in the creators’ wide-ranging work. It’s lots of fun and uplifting to see young versions of our heroes push back against the sexism of Los Matamoscas, a group of bullies who have been making the kids’ lives difficult. It happens that these overly macho men also dictate the ad-hoc rules of a popular car show so they can bar women from competing. As the women in question are furthermore queer (Mamá Impala and Mamá Gazelle, Lupe’s two mothers), the affirmation and representation of marginalized, intersectional identity is particularly poignant.

Just as in life, the hurdles male bullies set for the women are ridiculous (cross speed bumps without scraping the bottom of car, make sure a 5-gallon jar of agua fresca doesn’t spill during a full lap, paint car with no visible brush strokes). But the three new friends (united as allies of the women and victims of Los Matamoscas’ bullying) use their individual skill sets to beat the gang at their own game. Along the way, they earn the respect (and possibly friendship) of some of the macho dudes.

Along with Raúl’s amazing ball-point art (he brings green in this time!) and the linguistic exploration of Spanish and indigenous languages, Lowriders Blast from the Past takes advantage of its historical setting to introduce young readers (and old) to Chicano art of the 70s and 80s, specifically the work of ASCO (great name, heh), an East Los Angeles art collective that was active between 1972 and 1987. Raúl’s recreations of some of their signature pieces was a highlight for me, showcasing just how diverse his talents are. (Full disclosure: he and I have been working on a graphic novel together.)

Camper deftly defies the stylistic patterns that a middle-grade book might normally default to, and if the storyline itself is comfortably predictable, the execution (with its edifying digressions and code-switching) is one-of-a-kind and culturally spot-on.

I loved this volume, and can’t wait to see what adventures Lupe, Flapjack, and Elirio go on next!

ABOUT THE AUTHOR: Cathy Camper is the author of Lowriders in Space, Lowriders to the Center of the Earth and Lowriders Blast from the Past, with a fourth volume in the works, all from Chronicle Books. She has a forthcoming picture book, Ten Ways to Hear Snow (Dial/Penguin), and also wrote Bugs Before Time: Prehistoric Insects and Their Relatives (Simon & Schuster). Her zines include Sugar Needle and The Lou Reeder, and she’s a founding member of the Portland Women of Color zine collective. A graduate of VONA/Voices writing workshops for people of color in Berkeley, California, Cathy works as a librarian in Portland, Oregon, where she does outreach to schools and kids in grades K-12. Cathy is represented by Jennifer Laughran of Andrea Brown Literary Agency. For insights on the creative originas of the Lowriders series, read Cathy’s Camper’s guest post.

ABOUT THE ILLUSTRATOR: Raúl the Third is an award-winning illustrator, author, and artist living in Boston. His work centers on the contemporary Mexican-American experience and his memories of growing up in El Paso, Texas, and Ciudad Juárez, Mexico. Lowriders in Space was nominated for a Texas BlueBonnet award in 2016-2017 and Raúl was awarded the prestigious Pura Belpré Award for Illustration by the American Library Association for Lowriders to the Center of the Earth. He was also a contributor to the SpongeBob Comics series. Raúl wrote and illustrated the picture book ¡Vamos! Let’s Go to The Market!, which Versify will publish on April 2. For a fun and lively conversation about art, comics, growing up in El Paso and more, check out this one-of-a-kind audio interview with Raúl, conducted by illustrator Roberto Trujillo.

ABOUT THE REVIEWER: A Mexican-American author from deep South Texas, David Bowles is an assistant professor at the University of Texas Rio Grande Valley. Recipient of awards from the American Library Association, Texas Institute of Letters and Texas Associated Press, he has written a dozen or so books, including Flower, Song, Dance: Aztec and Mayan Poetry, the critically acclaimed Feathered Serpent, Dark Heart of Sky: Mexican Myths, and They Call Me Güero: A Border Kid’s Poems. In 2019, Penguin will publish The Chupacabras of the Rio Grande, co-written with Adam Gidwitz, and Tu Books will release his steampunk graphic novel Clockwork Curandera. His work has also appeared in multiple venues such as Journal of Children’s Literature, Rattle, Strange Horizons, Apex Magazine, Nightmare, Asymptote, Translation Review, Metamorphoses, Huizache, Eye to the Telescope, and Southwestern American Literature. In April 2017, David was inducted into the Texas Institute of Letters for his literary work.