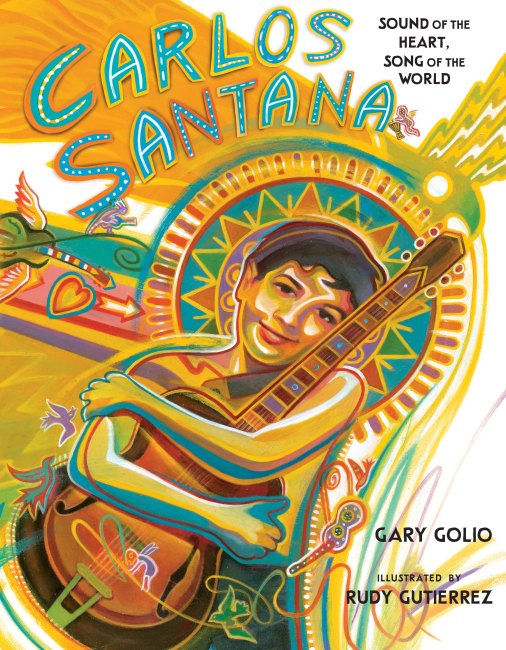 DESCRIPTION OF THE  BOOK: Carlos Santana grew up surrounded by music. Carlos’s father, a beloved mariachi performer, begins teaching his son how to play violin at an early age. But when Carlos later discovers American blues, he is captivated by the raw honesty of the music. Unable to think of anything else, he loses all interest in the violin and for a time, loses his way as well. Only after receiving an electric guitar of his own does he find his true life’s path.

From his early exposure to mariachi music to his successful fusing of rock, blues, jazz, and Latin influences, here is the childhood story of a legendary musician.

MY TWO CENTS: The magazine Rolling Stone places Carlos Santana within the pantheon of rock music’s greatest guitarists. But to put some perspective on his contribution as a Chicano, he was among the first to fuse blues-rock with Latinx instruments and rhythms, sometimes accompanied by lyrics in Spanish. In the mostly white world of rock and roll, Santana’s Latinidad stood in sharp relief, and his rise came at a time when Latinx performing artists rarely achieved notoriety on a national scale. Santana broke through this wall of invisibility. He did it by offering the world a sound that could not be ignored.

How did it all begin?

A captivating picture-book biography for readers of any age, Carlos Santana: Sound of the Heart, Song of the World brings us the background story. Told in poetic prose, the narrative opens in the subject’s infancy and follows the early years of his musical development, culminating in the moment when his love for blues-rock ignites.

One of this book’s greatest strengths is the art of Rudy Gutierrez, whose high-powered illustrations explode with movement and color. Page spreads vibrate with psychedelic swirls, suggesting the fluidity and intensity in Santana’s music.

Born in 1947 in Autlán de Navarro, Jalisco, Mexico—a town of “dirt roads and mud houses”—Santana’s humble beginnings do not hold him back for long. Thanks to wise and loving parents, he receives rich exposure to music. His father, José Santana, is a bandleader in the mariachi tradition. Carlos seems destined to follow his father’s career path, but then discovers a musical expression that speaks to him far more convincingly.

As a child, Carlos looks on his father with great admiration. “When Papá plays the violin, even little Carlos can see how people’s eyes light up, filled with el espíritu de la vida. Everyone wants José Santana to entertain them on their special days, and Carlos believes his father is an angel, flying on a bicycle with his golden harp as he rides to play in the church orchestra.”

At home, José is the younger Santana’s violin instructor. Unfortunately, “Carlos doesn’t really like the violin, and the smell of wood, held close to his face, gives him no pleasure.” In an effort to expand his son’s possibilities, José takes Carlos to the cantinas where he plays, offering the budding violinist time on the stage. Yet for Carlos, something important is missing in these occasions: joy.

But everything changes once he hears American blues guitarists on the radio. “Names like Muddy Waters and B.B. King seem magical, their songs raw and honest.” After this critical discovery, clashes between father and son become more frequent, especially when Carlos tries to sneak a bit of blues-style improvisation into a mariachi performance. Eventually, José leaves Mexico to pursue better paying gigs in the United States. With his father gone, Carlos finds a bit of breathing room to indulge his musical tastes.

Then, unexpectedly, a package arrives from San Francisco. It’s a used electric guitar! Coming from his father, this gift sends a profoundly affirming message. “There will be no turning back. Now [Carlos] can start to play the song inside him, the one that has been there all along.”

The book’s closing paragraph hints at the brilliant career that lies beyond the scope of this story. “Young Carlos Santana will create a new flavor of rock and roll, charged with Latin passion and the raw honesty of American blues.”

TEACHING TIPS: For a broader understanding of Santana’s significance in the history of rock and roll, check the back pages of the book, which include a “More About Carlos Santana” section, a brief list of discography, as well as Internet and print sources for further information. See also this article on the PBS website.

ABOUT THE AUTHOR: Gary Golio is a visual artist, a child therapist, and the author of numerous other picture-book biographies, whose subjects include Billie Holiday, Jimi Hendrix, Bob Dylan, and John Coltrane. Learn more about his work on his official website.

ABOUT THE ILLUSTRATOR: Rudy Gutierrez is the distinguished creator behind the cover art for Santana’s multiplatinum album Shaman and the recently released In Search of Mona Lisa. He also illustrated a U.S. postage stamp in commemoration of Jimi Hendrix. Learn more about Gutierrez in this interview.

ABOUT THE REVIEWER: Lila Quintero Weaver is the author of My Year in the Middle, a middle-grade novel published in 2018 by Candlewick Press. She’s also the writer-illustrator of Darkroom: A Memoir in Black & White. Darkroom recounts Lila’s experiences as a child immigrant from Argentina to Alabama during the tumultuous 1960s. The Spanish edition is now available, under the title Cuarto oscuro: Recuerdos en blanco y negro.  Learn more about Lila on her website, and follow her on Twitter and Goodreads.

3 comments on “Book Review: Carlos Santana: Sound of the Heart, Song of the World by Gary Golio, illustrated by Rudy Gutierrez”