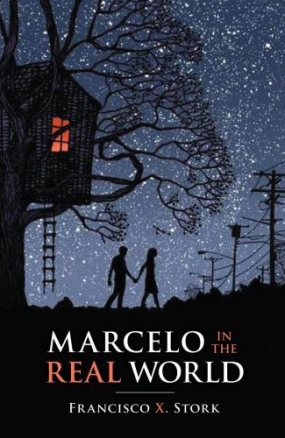 Marcelo Sandoval hears music that nobody else can hear — part of an autism-like condition that no doctor has been able to identify. But his father has never fully believed in the music or Marcelo’s differences, and he challenges Marcelo to work in the mailroom of his law firm for the summer . . . to join “the real world.”

There Marcelo meets Jasmine, his beautiful and surprising coworker, and Wendell, the son of another partner in the firm. He learns about competition and jealousy, anger and desire. But it’s a picture he finds in a file — a picture of a girl with half a face — that truly connects him with the real world: its suffering, its injustice, and what he can do to fight.

Reminiscent of The Curious Incident of the Dog in the Night-Time in the intensity and purity of its voice, this extraordinary novel is a love story, a legal drama, and a celebration of the music each of us hears inside.

MY TWO CENTS: Certain quirks cause 17-year-old Marcelo Sandoval to stand out from the crowd. He fastens his shirt all the way to the top button, even when he’s not wearing a necktie. His speech can be overly formal, and he often refers to himself in the third person. Don’t ask him to catch the meaning of an eye roll or a smirk because his brain isn’t wired to interpret subtler forms of nonverbal language. Plus, he hears music that no one else can hear. Marcelo was born with a cognitive disorder resembling Asperger syndrome, a category of autism spectrum disorder often considered “high-functioning.” The syndrome’s most recognizable traits are difficulty with social interactions and the tendency to become preoccupied with special areas of interest. In Marcelo’s case, this is the study of religion.

Marcelo attends Paterson, a school for kids with disabilities. The summer before his senior year, he’s supposed to work at the school’s stables, helping with the therapeutic ponies, but his father, a lawyer, has a different plan. Arturo Sandoval thinks it’s time for his son to experience “the real world,” in the form of a summer job at the law firm. If Marcelo manages the job satisfactorily, he’ll be allowed to choose which school to attend in the fall—the safe and friendly Paterson he knows well, or Oak Ridge High, a regular school not structured around the needs of students with disabilities.

What Marcelo encounters on the job is far more complex and morally ambiguous than the simple mailroom duties he’s hired to carry out. The law firm’s other partner has a college-age son, Wendell, who is also working at the office over the summer. Arturo considers Wendell a good role model for Marcelo. Little does he know that Wendell is much more interested in checking out the female employees than in getting any work done, and Jasmine, Marcelo’s supervisor, is the main object of his lust. At first, Marcelo tries to ingratiate himself to Wendell, who holds considerable power in assessing Marcelo’s performance, but it becomes apparent that Wendell is a jerk who mocks Marcelo, objectifies women, and disregards Arturo as a “minority hire.”

Other workplace quandaries pop up. Marcelo discovers a photograph of a girl badly injured in a car crash, due to the failure of a windshield manufactured by one of the law firm’s most important clients. He begins to wonder about his father’s decision to protect wealthy corporations, instead of those who’ve been harmed by the corporation’s negligence and can’t afford legal help.

But this YA novel isn’t a legal thriller per se. It’s a variation on the coming of age story, one that visits romantic love and sexual intimacy, and repeatedly explores the idea of what is real. There’s the real music that everyone can hear and the internal music heard only by Marcelo. There’s the real world of the law firm and Oak Ridge High School, and the protected world of Paterson. And how about the distinction between a happy smile and a sarcastic smile, or the literal words that people use and the actual meanings behind them? Plus, who is the real Arturo: the father that Marcelo knows, or the lawyer who may have wandered into less than noble choices? Reality is tough to decode.

I am not qualified to comment in depth on Stork’s depiction of Marcelo’s cognitive disorder. As I read, I kept myself alert for any signals that the author had romanticized the character’s condition or imbued him with magical or savant abilities, as is often the case in cultural portrayals of people with autism spectrum disorders. I saw nothing approaching those errors. Luckily, Disability in Kidlit, a blog devoted to reviewing books about characters with disabilities, has also published a review of Marcelo in the Real World. Read S.E. Smith’s fine analysis here.

Stork presents the Sandovals as a cohesive, but realistic Latino family, with flaws intact. They stand apart from the most prevalent depictions of Latino families in fiction and film, where poverty, domestic violence, and trouble with immigration issues crop up frequently. Marcelo’s mother, Aurora, is a registered nurse. She and Arturo are educated, upper-middle class professionals of Mexican heritage who can afford to send their son to a specialized private school. Their other child, Yolanda, is enrolled at an Ivy League university. Judging by their achievements, the Sandovals are living the American Dream, but crass remarks by Wendell convincingly show the darker side of reaching the Dream, that even successful Latinos are subject to derisive questions about their legitimacy.

Francisco Stork is a brilliant writer. His characters breathe, his dialogue sings, and his depiction of Marcelo’s interior life sparkles with beautiful insights and revelations. In writing his main character as a Latino with a developmental disorder, he gives readers the rare opportunity to experience two seldom combined, yet richly portrayed worlds. In Stork’s hands, this intersection of culture and cognitive challenge becomes suffused with poetic tenderness, and the result is an unforgettable novel.

Francisco X. Stork was born in Monterrey, Mexico, and moved to the United States at age nine. He studied at Spring Hill College, Harvard University and Columbia University, where he completed a law degree. Stork’s five published novels have received awards, honors and high praise from reviewers. Keep up with publishing news and events at his official author site.

The official site of the autistic professor, speaker and author Temple Grandin

“Navigating Love and Autism,” a profile in The New York Times

In this video clip, comedian DL Hughley shares a touching story about his adult son with Asperger syndrome.