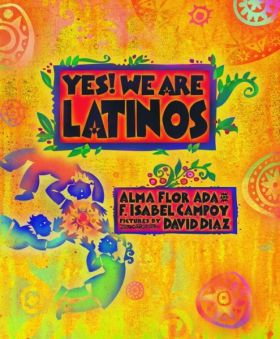 DESCRIPTION FROM THE PUBLISHER: Juanita lives in New York and is Mexican. Felipe lives in Chicago and is Panamanian, Venezuelan, and black. Michiko lives in Los Angeles and is Peruvian and Japanese. Each of them is also Latino.

Thirteen young Latinos and Latinas living in America are introduced in this book celebrating the rich diversity of the Latino and Latina experience in the United States. Free-verse fictional narratives from the perspective of each youth provide specific stories and circumstances for the reader to better understand the Latino people’s quest for identity. Each profile is followed by nonfiction prose that further clarifies the character’s background and history, touching upon important events in the history of the Latino American people, such as the Spanish Civil War, immigration to the US, and the internment of Latinos with Japanese ancestry during World War II.

Alma Flor Ada and F. Isabel Campoy’s informational yet heartwarming text provides a resource for young Latino readers to see themselves, while also encouraging non-Latino children to understand the breadth and depth of the contributions made by Latinos in the US.

Yes! We Are Latinos stands alone in its presentation of the broad spectrum of Latino culture and will appeal to readers of fiction and nonfiction.

MY TWO CENTS:  Yes! We are Latinos belongs on every essential reading list of Latino children’s literature, as is often true of books co-authored by the acclaimed duo of Alma Flor Ada and Isabel Campoy. No single work can cover every expression of Latino life in the United States, yet this book for middle-grade readers provides a generous glimpse of historical, cultural, ethnic, and linguistic aspects of the community. The authors’ approach pairs thirteen character vignettes, written as monologues in free verse, with matching expository sections of historical and cultural information. Collectively, the alternating sections deliver vivid, easily digestible insights into what is meant by Latino. There is no single Latino identity, the characters seem to say, and each of us is worthy of your attention.

The authors’ commitment to showing a wide representation of Latino life comes through in the vignettes. The featured characters reflect a generous range of ethnic and regional groups, some of which speak no Spanish, mirroring the fact that many Latinos come from bicultural and transnational families. In one vignette, we meet Susana, a Sephardic girl who lives in San Francisco. In another, we’re introduced to Dominican-born Santiago, who now calls Detroit home.

Sometimes young Latin@s would love nothing better than to break away from traditions they consider too confining. The story of Gladys, a Puerto Rican living in Philadelphia, is the best example of this. She watches the preparations for her sister’s quinceañera, expecting that before long her mother will want to start planning Gladys’s “quinces.” But Gladys’s dreams are pulling her in another direction, toward college.

Julio is from a farm migrant family originating in Teotitlán del Valle, a village in Oaxaca, Mexico. Like other members of his original indigenous community, Julio speaks Zapotec. When his family moves to Stockton, California, he must navigate two foreign languages, English and Spanish, in order to function in a primarily Spanish-speaking Chicano community, within a mainstream American setting. He’s adjusting to life in the new country, but still looks back on his homeland with longing and pride, recalling the beautiful and prized tapestries that Teotitlán’s weaving looms are known for.

In one pair of monologues, two Latinas with Asian backgrounds form a friendship. Lili is a Guatemalan of Chinese descent, whereas Mikito’s heritage is Japanese and Peruvian. The families of both girls passed through multiple immigration journeys. In the educational follow-up, we learn about waves of Asian immigrants that landed on the shores of South and Central American countries and the descendants of these immigrants who eventually drifted northward. The section on Japanese Latinos reveals a troubling detail of American history: Wartime internment camps built to contain Japanese Americans also held Japanese families who were deported at the urging of the United States by the Latin American countries where they resided. In these internment camps, Japanese Latinos often found themselves socially isolated, since they spoke only Spanish and few others in the camp could communicate with them.

Outmoded characterizations of Latino life give everyone the same background, the same history, the same traditions and tastes. This book’s emphasis counteracts generalizations and brings forward Latinos’ complexity. In each vignette, the authors touch on multiple elements, including the scattered geographic settings where the characters live, the varied occupations their parents work in, and the traditions their families celebrate. Yes! We Are Latinos offers an important and long overdue contribution to children’s literature.

TEACHING TIPS: Yes! We Are Latinos is the work of educators and seems custom-made for later elementary and middle school classrooms. The poetic narratives bring life to the informational sections, which in turn invite further exploration of the countries and histories they feature. Teachers may want to assign students paired sections to expand upon through written reports or artistic responses. For example, students could design posters depicting specific Latino cultures. Another idea is to have students compose poetic vignettes of imaginary characters reflecting geographic regions not covered in the book.

ESL instructors are likely to appreciate the book’s short, digestible sections, which contain not only interesting stories, but also broad vocabulary.

A native of Cuba, Alma Flor Ada is an award-winning author, poet, storyteller and scholar of literature. She has published more than 200 books for children, many of them in partnership with Isabel Campoy.

In this interview, Alma Flor Ada discusses the development of Yes! We Are Latinos and other topics, including poetry and bilingualism. 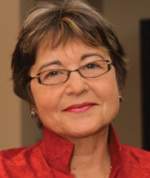 Isabel Campoy is a Spanish storyteller, poet, playwright, songwriter and educator in literacy and language acquisition. She is fluent in multiple languages and her work in the field of publishing includes translation. She is an award-winning author and a frequent writing partner of Alma Flor Ada.

Video visits with the authors:

Isabel talks about her life and work:

The Winter Conference of the Society of Children’s Book Writers and Illustrators in New York is kind of like a massive family reunion, with all 1,000+ people having a love of children’s literature in their blood. It’s very cool for me to break away from my full-time day job as a middle school teacher and attend this annual gathering of creative people who all want to be published or work in some capacity with kid lit. While this love of children’s literature is the common denominator at the conference, the attendants are diverse people with myriad interests. Because of this, my ears naturally perk up when speakers address diversity in publishing.

The SCBWI did not have a specific panel or break-out session dedicated to diversity in children’s publishing, but speakers included Raul Colón, Shadra Strickland, Jack Gantos, and Nikki Grimes. Also, the topic of diversity popped up throughout the conference as writers, illustrators, and editors offered great advice about craft. 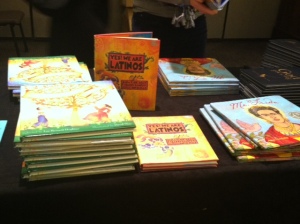 Some of the Latin@ titles at the book sale

During her talk, Siscoe was asked about diversity. She responded by saying she is always on the lookout for diverse main characters. In fact, she said a “selling point” for the novel Unusual Chickens for the Exceptional Poultry Farmer, a middle grade debut by Kelly Jones set to release in 2015, was its Latina protagonist.

The final panel on Saturday was about book banning rather than craft. Susanna Reich, chair of the Children’s and Young Adult Book Committee for PEN American Center, floored me during this session. She said children’s and young adult books make up the vast majority of books on the ALA’s list of banned and challenged books. While I knew children’s books were often challenged, I didn’t realize that on the most recent list of the “Top 100 Banned/Challenged Books” from 2000-2009,” 72 of the top 100 are children’s and young adult books, with Harry Potter at the top of the list.

Reich also made the point that censorship isn’t only about removing books from shelves. Censorship also occurs when so few diverse titles make it onto the shelves. “It’s a form of censorship when the amount of multicultural kid lit published hasn’t increased in twenty years,” she said.

But what about those books that do make it onto the shelves? Well, it’s up to us to buy them. Reich quoted poet Alexis DeVeaux, who said, “Buying a book is a political act.” Reich challenged each of us to think about the books we choose to buy and read. Do we censor our book buying in any way? Do we make a conscious effort to read beyond our comfort zones? Do parents and teachers select books for their children and students that include diverse characters?

“Multicultural books can speak to all kids, not only kids of color,” said Reich.

Hear, hear! More details from Reich’s talk can be found here on the SCBWI site.

At the end of an SCBWI conference, I am always exhausted in a good way, with a thousand things to consider as a reader, writer, parent, and teacher. This year, the speakers in the sessions I attended reinforced the idea that I can help to promote diversity in children’s literature in each of these roles. Not only can I broaden my own reading interests, but I can expand reading choices for my daughter and my students. By doing this, I will support diversity in kid lit and the members of my SCBWI familia who write, illustrate, edit, and publish books with diverse characters.