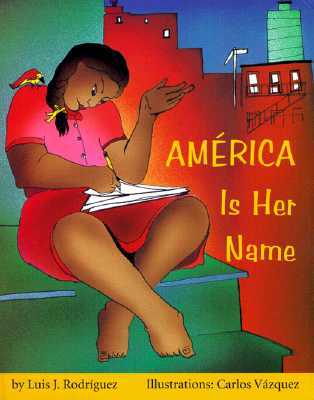 DESCRIPTION FROM THE BOOK JACKET: Set in the Pilsen barrio of Chicago, this children’s picture book gives a heartwarming message of hope. The heroine, América, is a primary school student who is unhappy in school until a poet visits the class and inspires the students to express themselves creatively–in Spanish or English. América Is Her Name emphasizes the power of individual creativity in overcoming a difficult environment and establishing self-worth and identity through the young girl América’s desire and determination to be a writer. This story deals realistically with the problems in urban neighborhoods and has an upbeat theme: you can succeed in spite of the odds against you. Carlos Vázquez’s inspired four-color illustrations give a vivid sense of the barrio, as well as the beauty and strength of the young girl América.

MY TWO CENTS: Luis Rodríguez’s América is Her Name (1998) tells the story of América Soliz, an undocumented immigrant from Oaxaca, Mexico to Pilsen, Illinois—Chicago’s predominantly Mexican community—and her struggles to find her voice and an identity that captures the complexity of who she is. Throughout the text, América faces discrimination in the classroom, witnesses the violence in her community, and feels patriarchal oppression in her home. Through poetry, however, she gains a language and agency to challenge and transform her reality.

At the beginning of the story, the narrator makes clear that América is having a difficult time feeling like she belongs in her new home in the United States. Pilsen is not like her hometown in Oaxaca. She witnesses gun violence—a shooting between two youth groups—as she walks to school. Her white teachers marginalize her for not speaking English and she also overhears them calling her an “illegal.” While América is not sure what that means or how a person can be illegal,she understands they do not want her to belong. At home, América becomes aware of the discrimination her parents face as manual labor workers when her father loses his job and her mother comes home expressing her frustration at being called a “wetback.” The narrator also alludes to the fact that the uncle that lives with them is an alcoholic.

Despite the barrage of oppressions that América confronts on a daily basis, she is able to find a sense of self and a voice through poetry. Her classroom gets a visit from a Puerto Rican poet, Mr. Aponte, who encourages América to write her story in any form and any language that best represents her. América writes about her Mixteca indigenous culture in Oaxaca and encourages her mother and younger brother to do the same. The most beautiful scene in the book is a representation of América and her mother sitting at the kitchen table as they practice their writing.

Illustrator Carlos Vazquez depicts mother and daughter in vibrant colors as their words come alive. It is an empowering moment for América and for the reader. Poetry, and writing in general, is not reserved only for América, who has access to education and the possibility of belonging in the United States, but América also makes is available to her mother. By sharing this practice with her mother, América challenges understandings of who gets to belong, which is an extremely important theme in the book. Furthermore, by making poetry available to her family, América attempts to bridge the divide between (im)migrants and their children. América is Her Name is a heartfelt and empowering story that explores issues of what it means to belong in the United States.

AUTHOR: Luis J. Rodriguez is one of the leading Chicano writers in the country with fifteen published books in memoir, fiction, nonfiction, children’s literature, and poetry. Luis’ poetry has won a Poetry Center Book Award, a PEN Josephine Miles Literary Award, and a Paterson Poetry Book Prize, among others. His children’s books—America is Her Name and It Doesn’t Have to be This Way: A Barrio Story—have won a Patterson Young Adult Book Award, two Skipping Stones Honor Awards, and a Parent’s Choice Book Award. Luis Rodriguez is best known for the 1993 memoir of gang life, Always Running: La Vida Loca, Gang Days in L.A.

FOR MORE INFORMATION about América Is Her Name visit your local library or bookstore. Also check out worldcat.org, indiebound.org, goodreads.com, amazon.com, barnesandnoble.com, and Curbstone Press.

Sonia Alejandra Rodríguez has been an avid reader since childhood. Her literary world was first transformed when she read Rudolfo Anaya’s Bless me, Última as a high school student and then again as a college freshman when she was given a copy of Sandra Cisneros’s The House on Mango Street. Sonia’s academic life and activism are committed to making diverse literature available to children and youth of color. Sonia received her B.A. in English from the University of Illinois at Urbana-Champaign. She is currently a PhD candidate at the University of California, Riverside, where she focuses her dissertation on healing processes in Latina/o Children’s and Young Adult Literature.