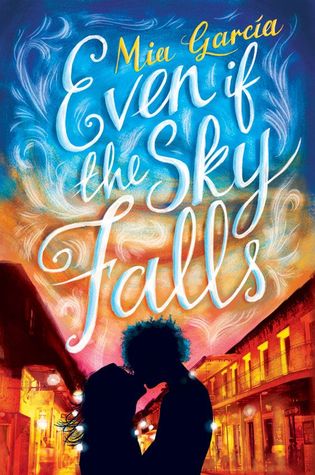 DESCRIPTION FROM THE PUBLISHER: One midsummer night. Two strangers. Three rules: No real names. No baggage. No phones. A whirlwind twenty-four-hour romance about discovering what it means to feel alive in the face of one of life’s greatest dangers: love.

Who would you be if you had one night to be anyone you want?

Volunteering in New Orleans was supposed to be a change, an escape from the total mess Julie left at home and from her brother’s losing battle with PTSD. But building houses surrounded by her super-clingy team leader and her way-too-chipper companions has Julie feeling more trapped than ever. And she’s had enough.

In a moment of daring, Julie runs away, straight into the glitter, costumes, and chaos of the Mid-Summer Mardi Gras parade—and instantly connects with Miles, an utterly irresistible musician with a captivating smile and a complicated story of his own. And for once, Julie isn’t looking back. Together Julie and Miles decide to forget their problems and live this one night in the here and now. Wandering the night, they dance on roofs, indulge in beignets, share secrets and ghost stories under the stars, and fall in love. But when a Category Two hurricane changes course and heads straight for NOLA, their adventure takes an unexpected turn. And, suddenly, pretending everything is fine is no longer an option.

MY TWO CENTS: Mia García’s debut novel, Even if the Sky Falls is a colorful, emotional book that grabbed me from the first page. Set in New Orleans, the reader feels transported to the French Quarter and Jackson Square as you follow Julie and Miles on their night of throwing caution to the wind. Both characters have intriguing backstories that I wanted more of. I found myself caring not only for Julie but also for her brother Adam, who you learn more about through the course of the novel. Miles seemed at first to be a Don Juan–slick, handsome, and a massive flirt, but throughout the novel, you discover he is much more complex.

Julie is a 16-year-old Puerto Rican girl who travels to New Orleans as part of a youth group trip to rebuild homes in New Orleans. She is doing so to get away from her family issues at home; her brother Adam recently returned from a tour of service and is not quite the same person he was before he left. While rebuilding homes, she sees a van filled with loud, happy people and decides that she is going to leave “Old Julie” behind and explore the city. She finds herself in the middle of Mid-Summer Mardi Gras, where she meets Miles, who is part of the Mid-Summer Boys band, whose music keeps Julie captivated. A New Orleans native, Miles knows the city and its history, so throughout the night, he shows Julie, who he calls Sunshine or Lila, the ins and outs of the “real” New Orleans. They agree to leave all baggage behind, just for one night. What they do not realize, however, is that they are about to fall hard for each other, and their pasts refuse to stay in the past. They also do not realize that a massive storm is heading straight their way, and it will change both of their lives. Both Julie and Miles have issues that they try to suppress, but it is not until the storm is upon them that they finally face what they have been running from.

In the beginning, I thought the storm was cliché, but it matches the character’s developments, especially with Julie and her refusal to share secrets about her past until they fully consume her. There are some religious aspects, mostly with her Abuela Julia, but it did not feel like García was beating me over the head with a Bible. It was also refreshing to have a Puerto Rican character whose heritage is referred to but not the central issue. At several points of the novel, Julie goes back to a time when she was in Puerto Rico on a trip or how her Abuela Julia helped to shape her into the person she is. I was gripping the book as I tried to figure out what the big moments were that both characters were running from, but García did not give them up easily. The big moment for each character hit me like a punch to the gut and made the characters more believable. Overall, the novel has a simple story structure: girl is unhappy with life, girl decides to be reckless, girl meets boy, they fall in love. But, García has given these characters so much depth and so much at stake that it is hard not to feel for them and want to cheer them on as they navigate both New Orleans during a storm and their pasts.

From School Library Journal: “The plot itself unravels like a hurricane, building and surging along with the storm. The story plateaus and tensions relax during the eye of the storm, but as quickly as the storm returns, so does the building action, which rages on until the final page.”

From Kirkus: “The author’s rich descriptions of New Orleans make the vibrant city come alive, from the music and ghost stories to the vampire lore and delicious beignets…A compelling 24-hour romance that’s as charged as its New Orleans setting.”

From Booklist: “García’s debut is a wrenching, high-stakes exploration of self-discovery. Readers of GayleForman, Sarah Dessen, and E. Lockhart will find themselves engaged by Julie’s quest.”

TEACHING TIPS: I would be somewhat hesitant to teach this in a class, only for some language usage, but I would definitely keep it in a classroom library so that students could check it out! If someone wanted to teach this book, I would definitely front load it with some information about New Orleans, its history, culture, and weather. It is key for the reader to understand the impact of Hurricane Katrina on this city. I was young when Katrina happened, but I know the repercussions are still felt on the city today. Also, I think it would be helpful for students to learn about what happens to soldiers after they come home from war, so they can better connect and sympathize with Adam.

FOR MORE INFORMATION about Even if the Sky Falls, check your local public library, your local bookstore or IndieBound. Also, check out Goodreads, Amazon, and Barnes & Noble.

For a guest post from the author, about the fear and stress of writing about her culture, click here.

ABOUT THE AUTHOR: Mia García was born and raised in San Juan, Puerto Rico. She moved to New York, where she studied creative writing at the New School, worked in publishing, and now lives under a pile of to-be-read books. She’s a giant geek with comic book and archery addictions. Even if the Sky Falls is her debut novel. Her second novel, The Year of Everything, is expected to release in winter 2018. You can find her at www.mgarciabooks.com @MGarciaWrites on Twitter and Instagram, as well as on Tumblr at MGarciawrites.tumblr.com. 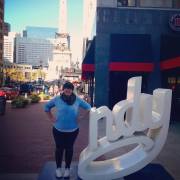 ABOUT THE REVIEWER: Troi Genders is a senior at Ball State University studying Secondary English Education. Troi is a self-proclaimed cat-mom, YA and Contemporary enthusiast, and lifelong learner. You can reach her via email at tlgenders@bsu.edu or on twitter at @MissGendersBSU.