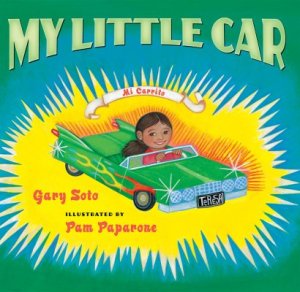 DESCRIPTION FROM THE BOOK JACKET: Teresa’s grandfather—her abuelo—gives her a fantastic little car for her birthday and she can’t wait to show it off to everybody. The car is so cool that the other bikes on the sidewalk part for her and even grown-ups turn their heads as she goes by. Teresa promises she’ll always take care of her beautiful carrito, but some promises are hard to keep. When Teresa’s abuelo comes to visit, will he even recognize his beautiful present?

MY TWO CENTS: Through a shiny book cover of a girl riding a little car with a big smile, Gary Soto and Pam Paparone introduce us to a Chicana first-grader named Teresa. Her confidence and pride are enhanced when she receives a toy lowrider for her birthday, a customized car originated by Chicanos in California. Paparone’s bright acrylic illustrations strongly complement Soto’s words to project the subculture surrounding lowriders and other features distinctive of some Chicano and Latino neighborhoods and their communities.

When we first meet Teresa she is feeling embarrassed by her tricycle, thinking that it was a toy for “little kids.” For her birthday, she receives a beautiful lowrider with a personalized plate from her abuelito, giving her an immediate sense of independence and the confidence of being recognized as a big girl. Through this gift and Teresa’s relationship to it, Soto presents us with two important themes: the obvious one is the importance of taking responsibility and care of your belongings and the second one is presented in a more nuanced way, and perhaps silently aimed to parents: how easy it is to break the “gendering” of toys and roles.

Once Teresa receives her carrito, she pedals non-stop down the sidewalk, around her neighborhood, and she even takes it to the playground car show, where she wins first place. But as the days pass, she becomes careless with her carrito: she leaves it out in the rain, it gets pooped on by birds, it’s crushed by her dad’s truck, and it even gets sticky from spilled soda. Her mother and grandfather get preachy and stern while teaching Teresa the importance of taking responsibility of her belongings and the preaching works: in the end she learns her lesson.

Interestingly, the book never gets preachy when dealing with the gender stereotyping of toys. We live in a society where we are constantly presented with gender-stereotyped toys in books, movies, TV shows, commercials, and stores. In this book we have a Chicana girl who disrupts the gender norms around cars as toys solely for boys, and who challenges the machismo present in Latino communities. Gary Soto shows formidable restraint by not including a single line in the book that says that girls should or shouldn’t do certain things. He just provides us with a story that normalizes girls liking toy cars by showing Teresa being happy with her gift and using it without any limits. Surely this portrayal is one that car-loving kids from any gender will identify with.

TEACHING TIPS: This picture book works well as a read aloud for parents, guardians, and librarians. It can be used to teach about responsibility and ownership, while at the same time, children can learn some words in Spanish. The book includes a glossary of the few words in Spanish incorporated throughout the story.

Spanish and Language Arts teachers (Pre-K-2nd grade) can use the text to not only teach Spanish words, but also to develop classroom activities, such as sequence of events, vocabulary, and alternate endings to the story. It is also useful to incorporate Mexican-American Studies to elementary school classrooms.

AUTHOR: Gary Soto is a Mexican-American author, who has written picture books, chapter books, poetry collections, young adult books, plays and novels. Soto, raised in Fresno, California, has a B.A. in English from Cal State and a M.F.A. from the University of California, Irvine. He has received several awards, including the 1977 Bess Hokin Prize, the Levinson Award, the Literature Award from the Hispanic Heritage Foundation, the American Book Award from the Before Columbus Foundation, the Andrew Carnegie Medal from the American Library Association and the Beatty Award for his book, Baseball in April. He is also the recipient of fellowships from the California Arts Council, the Guggenheim Foundation and the National Endowment for the Arts. In addition to his work as a writer, Gary Soto has taught English to Spanish-speakers as a volunteer. He divides his time between Berkeley, California and his hometown of Fresno.

Some of his selected books are: The Skirt, Pacific Crossing, Chato and the Party Animals, Baseball in April and Other Stories, Neighborhood Odes, Too Many Tamales, Chato’s Kitchen, Taking Sides, Off and Running, Cat’s Meow and Chato Goes Cruisin’.

ILLUSTRATOR: Pam Paparone is an illustrator of many books for children, such as: Raindrop Plop by Wendy Cheyette Lewison, I Like Cats by Patricia Hubbell, Flip, Float, Fly: Seeds on the Move by JoAnn Early Macken, The Tattletale by Lynn Downey and Of Number and Stars: The Story of Hypatia by D. Anne Love. She is also the author and illustrator of Cinco Patitos/Five Little Ducks and Who Built the Ark?  Her paintings have appeared on the cover of The New Yorker. Pam Paparone lives in Philadelphia, Pennsylvania.

My Little Car was one of commended titles of the 2007 Américas Award for Children’s and Young Adult Literature. For more information about My Little Car visit your local library or bookstore. Also check out WorldCat.org, Indiebound.org, Goodreads, Amazon and Barnes and Noble.