DESCRIPTION OF THE BOOK: Reeling from the truths uncovered while searching for her sister in Italy, Anastasia Phoenix is ready to call it quits with spies. The only way to stop being a pawn in their game is to remove herself from the board. But before she can leave her parents’ crimes behind her, tragedy strikes. No one is safe, not while Department D still exists.

Now, with help from her friends, Anastasia embarks on a dangerous plan to bring down an entire criminal empire. From a fire-filled festival in England to a lavish wedding in Rio de Janeiro, Anastasia is determined to confront the enemies who want to destroy her family. But even Marcus, the handsome bad boy who’s been there for her at every step, is connected to the deadly spy network. And the more she learns about Department D, the more she realizes the true danger might be coming from someone closer than she expects.

MY TWO CENTS: A year after Proof of Lies, author Diana Rodriguez Wallach gives us a sequel that is just as a fast-paced, Lies that Bind. We follow Anastasia Phoenix’s quest to discover the truth about the Dresden Corporation, her parents’ death and, like the protagonist, the reader does not know who to trust. The novel skillfully reintroduces us to the main characters and the story line; Anastasia reflects on the events Keira, Marcus, and Charlotte have just experienced and reminds the reader of the key information to put us right back into another action-packed adventure. Wallach continues to develop her female protagonists. Although Keira continues to act a bit irresponsible and Charlotte has developed a love interest, we see Anastasia take charge and make decisions about next steps in their quest for safety and justice. According to my teen daughters, one of the things that they most liked was the suspense-filled chapters, which kept them turning page after page to try to figure out which one of the characters was good, bad, or in-between. They also liked the romance that continues to develop between Marcus and Anastasia.

The novel moves locations and remarks on cultural differences in each of the places the characters visit. For example, they find themselves in the middle of festival in England that is full of satire about American immigration politics and borderline racist overtones. Another occasion worth noting, although not central to the plot, is a long speech given by one of her friends at the funeral of her dead boyfriend. The speech remarks on the experiences of young black men who the educational system fails to help. If nothing else, this adds to Anastasia’s growth in understanding the intersection of race and immigration as experienced by marginalized communities.

Wallach includes information about real events at the end of the book, such as the fake Turkish coup of 2003, Hilda Murrell’s murder, and the 1998 World Cup Final, which adds to the detective-like narrative and espionage plot. She titled this section as “truths,” but this is ironic because although these events happened, they are full of mystery! This is, perhaps, one of my favorite parts of the book, realizing how the author uses this in the novel and, at the same time, reminding us that life is full of secrets. The last book in this trilogy, titled The End of The Lie, comes out in 2019 and we can’t wait to read it!

CLICK HERE for our review of PROOF OF LIES.

Also, check out the video below. Author Diana Rodriguez Wallach talks about how her personal travels match Anastasia’s journey in Lies that Bind. The video was posted on Jean Book Nerd’s YouTube Channel.

ABOUT THE AUTHOR: Diana Rodriguez Wallach is the author of the Anastasia Phoenix Series, three young adult spy thrillers (Entangled Publishing, 2017, ’18, ‘19). The first book in the trilogy, Proof of Lies, was named by Paste Magazine as one of the “Top 10 Best Young Adult Books for March 2017.” Bustle also listed her as one of the “Top Nine Latinx Authors to Read for Women’s History Month 2017.” Additionally, she is the author of three award-winning young adult novels: Amor and Summer Secrets, Amigas and School Scandals, and Adios to All The Drama (Kensington Books); as well as a YA short-story collection entitled Mirror, Mirror (Buzz Books, 2013).

In 2010 Diana was named one of the Top Ten New Latino Authors to Watch by LatinoStories.com, and she placed second in the International Latino Book Awards. Diana is featured in the anthology, Latina Authors and Their Muses (Twilight Times Books, 2015), and she currently blogs for Quirk Books. 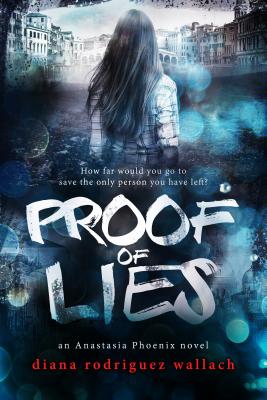