Today is the official release day of When Reason Breaks, my debut young adult contemporary novel published by Bloomsbury! Yay! The novel is about two girls, both sophomores in high school, who struggle with depression in different ways. Here’s part of the official description:

A Goth girl with an attitude problem, Elizabeth Davis must learn to control her anger before it destroys her. Emily Delgado appears to be a smart, sweet girl, with a normal life, but as depression clutches at her, she struggles to feel normal. Both girls are in Ms. Diaz’s English class, where they connect to the words of Emily Dickinson. Both are hovering on the edge of an emotional precipice. One of them will attempt suicide. And with Dickinson’s poetry as their guide, both girls must conquer their personal demons to ever be happy.

To celebrate my journey, which started seven years ago, I’m sharing some pictures I took along the way.

This first picture represents the writing, revising, and editing phase done alone and then with critique partners. It took me three years to write the draft that I used to query agents. Yes, that’s a long time, but I was working a full-time job and a part-time job, while single-parenting. My writing place is on my bed, and without fail, my dogs–first Rusty (RIP) and now Ozzie–have kept me company. This has been very sweet, except for the times they pawed the keyboard. Notice the guilty look in his eyes.

I landed an agent, Laura Langlie, after a few months of querying. I revised based on her feedback, and then the manuscript went out on submission. It stayed out there for a long, long time. We received some valuable feedback after the first round, so I revised again and went back out on submission. Finding the right agent and editor is kind of like literary Match.com. You might go on lots of dates that don’t work, but that’s okay, because the goal is finding the perfect person. So, it took a long time, but the book landed with the perfect person, Mary Kate Castellani at Bloomsbury. This is a picture of the manuscript next to my contract. Receiving the contract is one of those “oh-my-goodness-this-is-happening” moments. At this point, the deal had already been announced online, but seeing the contract in black-and-white makes it real.

AHHHHH! ARCs. This was a big moment. I didn’t taken any pictures during revising and copy editing. They wouldn’t have been pretty. But, please know that a lot goes on between the previous picture and this one (major understatement). After revisions, the manuscript went to copy edits. That day was significant because it meant drafting, for the most part, was over. Changes could still be made, but the story moved from creation into production. I received a blurb from the amazing Margarita Engle, and the cover was revealed. Soon after, these beauties arrived at my house. And AHHHHH! ARCs! Even though I had seen all the pieces–manuscript, blurb, cover art–it was different seeing it all put together in book form. 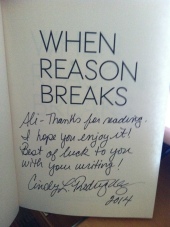 The ARCs went on tour to other authors debuting in 2015, friends, and family. I also gave a couple away on Goodreads. This was the copy that went to the first winner, Ali. I have signed thousands of things, but this was the first time I signed a copy of my novel. Around this time, the book was listed on Goodreads, Amazon, Barnes & Noble, and other places and became available for pre-order. Holy wow!

And people were actually reading the book, which, of course, was always the goal, but as ARCs went out and reviews popped up, I became aware that what had once belonged to me–what had only existed in my head and heart–was really out in the world. Here is photographic evidence of actual reading going on.

Now that ARCs were out in the world, I considered ways to help market the novel. One thing I learned from other authors was that I had to do my part when it came to marketing. I didn’t go overboard with swag. I decided to create a book trailer and print book marks and postcards with a QR code linked to the book trailer.

The book trailer was a fun, family experience. My sister’s dining room table was the work station, with my

nephew–a high school freshman–doing all of the real tech work. He’s a genius with computers, so he handled putting it all together. The opening voice belongs is my niece, and I narrate the rest of it, although my voice was altered to be lower and much cooler, in my opinion. Bookmarks have been distributed to teachers, librarians, and bloggers. Postcards went to high schools, public libraries, and independent bookstores in Connecticut, in addition to some libraries and bookstores in other parts of the country. Writers always question “what works,” and I think the answer is different for each of us. Bookmarks worked for me because I’m a teacher and I have lots of teacher friends who asked for 50-100 at a time. I knew they’d get into the hands of teen readers. Also, I have received some positive feedback from the postcards. A few librarians emailed me saying they received the post card, viewed the trailer, and planned to order the book; some even invited me to participate in events. So, in my mind, these three things were worth it.

During this last month before publication, I’ve been excited and nervous and, most of all, grateful. Thank you to everyone who has been involved in this process. It takes a village to write and publish a book, and because of everyone who supported me along the way, I saw my novel on a shelf in Barnes & Noble for the first time this past weekend. Wow!

And please look for it at your local libraries.

At this point, you have written a novel with the help of critique groups and beta readers and landed your agent of choice thanks to a killer query letter. Now what?

Before I answer that, I want to emphasize that each writer’s road to publication is different. The process so far–write book, write query letter, get an agent–can play out in myriad ways. Some writers craft a book quickly and wait a long time to connect with the right agent. Some complete several manuscripts before moving ahead in the process. Others choose not to have an agent at all. Please remember there is no one way or right way to get your work published. In general, however, if you plan to head down the traditional publishing path, then you will likely follow the basics outlined in our series so far: write book, craft the query letter, land an agent.

Now what? Your agent may ask you to further revise your novel before it’s ready to submit to editors. When the manuscript is ready, your agent will send it to certain editors based on her experience and knowledge of the editors and publishing houses.

And what do you do? You wait and worry and dream and go to your day job and clean the house until it’s sparkling and check your email a thousand times a day at least and then you try to calm down by reminding yourself it’s out of your hands and after a few deep breaths and zen-like moments, you start a new project and whenever you have a moment, you refresh your email again and again.

Or, maybe that was just me. Like I said, everyone is different. In general, though, many writers agree that the process includes angst-filled waiting because your manuscript is now in the hands of editors, the people who may fall in love with your novel, take it to internal meetings, and offer you a contract.

At this point, the process can take weeks, months, or years. Your friend could sell her novel at auction to a major publishing house with a six-figure advance. You may be rejected dozens of times before receiving a contract. You will both end up on bookshelves, no matter how you got there. Don’t compare yourself to other writers. You will, but you shouldn’t.

Back to the process…editors will read your novel and say yes, no, or maybe but we want you to revise and resubmit. If the novel doesn’t sell, you and your agent may discuss the patterns in the rejections. If certain aspects are routinely criticized, then your agent may ask you to revise further before you go out on another round of submissions. This is exactly what happened to me.

I began working with Laura Langlie in August 2010. I revised certain chapters based on her notes, and we went on submission a few months later. Some editors responded within weeks, while others took months. This is normal. After a series of rejections, an editor expressed interest but wanted some changes. I revised and resubmitted the first eight chapters. After a few months of waiting, we learned she had left the business completely. Sigh.

I revised the rest of the novel in the vein of chapters 1-8. Once done, Laura submitted it to another batch of editors. More rejections–some very flattering, some not so much–and more submissions. In June 2012, we received an enthusiastic response from Mary Kate Castellani from Bloomsbury/Walker. She asked me to revise and resubmit the first nine chapters. After reading those, she gave me the thumbs-up to keep going. I completed the revision, and Mary Kate shared the novel with her team. We had an offer in March 2013.

I have since done another major revision and am currently working on what should be the last round of writing before it moves along in the process. Right now, the novel is scheduled to be published in Winter 2015 by Bloomsbury.

This was my first novel ever. I expected to make lots of revisions, but the thing is, I agreed with the suggestions. I didn’t make changes along the way only because I wanted to get published. I revised each time because I knew my agent’s or editor’s suggestions would improve the story. This back-and-forth between the writer, agent, and editor could make or break the submission process. As a writer, I often asked myself:

And what is the goal? The goal is to share this story, to take it from notes on napkins to hardcover.

Do I trust my agent and editor? Are they respectful, professional, and enthusiastic? The answer was always yes.

So I trusted them, revised, and I made it through a long submission process that required a lot of work. In the end, I knew without a doubt that my much-improved novel landed in the right place.

Best of luck to all of you on submission! Please share your experiences with us in the comments.