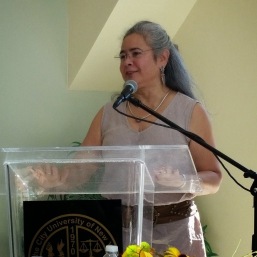 Once, I attended a large conference for educators, and when I approached the keynote speaker to ask a question, handlers surrounded her and ushered her away. I bring this up because the Comadres y Compadres Writers Conference was the opposite experience. The conference, held at Medgar Evers College in Brooklyn on September 27, was an intimate affair, meaning the well-known agents, editors, and authors were *right there* and accessible. Bestselling author Esmeralda Santiago posed for pictures. Meg Medina paused in the hallway to sign books. Conference-goers lunched at small tables with Stacy Whitman from Tu Books and Adriana Dominguez from Full Circle Literary. How cool, right?

The conference, in its third year, was developed by Dominguez, Marcela Landres, and Nora de Hoyos Comstock, the founder of Las Comadres para las Americas to “provide unpublished Latino writers with access to published Latino authors as well as agents and editors who have a proven track record of publishing Latino books.” The one-day event offered panels, one-on-one critiques, a pitch slam, and a lunch-time speech by keynote speaker Esmeralda Santiago, who told her own publishing story and emphasized the discipline needed to be a professional writer. Books of all the presenters were also available from La Casa Azul, a New York City bookstore that specializes in Latino Literature.

Here were some of the highlights:

Author Meg Medina, winner of the Pura Belpré Award for Yaqui Delgado Wants to Kick Your Ass, emphasized the importance of diversity in children’s literature. “We’re looking at a diverse set of kids in the (school) seats, so we need a diverse set of books.” She added that Latin@ books are not only for Latin@s: “Our books matter to all kids of all cultures.”

In terms of craft, Medina told writers to put their efforts into creating great work, not a great platform. The writing comes first. She also said she is not a methodical planner. Instead, she follows her character–she lets the characters speak to her–as she is writing and often asks, “What are you really afraid of? What’s really the problem?” When creating an antagonist, writers should “create a worthy opponent, a layered opponent. Don’t create a stereotype, especially for the bad guy.”

Medina spoke at a later panel with our own Lila Quintero Weaver, author of Darkroom: A Memoir in Black and White. During that session, moderated by Shelley Diaz, Senior Editor of School Library Journal’s reviews, Lila spoke about her non-traditional publishing route that led her to become an accidental author. Her graphic novel was originally a college project that eventually landed on the desk of the University of Alabama Press editors. Lila said she couldn’t think of a single disappointment in publishing so far and encouraged writers to see the process as an opportunity to grow, not just get published.

Here are Lila’s thoughts after the conference:

“One of the exceptional values of conferences like Comadres is what they offer over social media alone. You can share a table at lunch, laugh together, chat about life beyond writing, and listen to the same speaker in the same moment. It’s the magic of synergy, which in the case of Latin@s comes with extra simpatico in the sauce! I returned home with a pocketful of business cards, and my Twitter feed lit up with Latin@ conversations on multiple topics. Let’s not forget the opportunity to discover new writers. My Goodreads update will soon reflect that fact. I wasn’t seeking representation or editorial feedback, but those opportunities were present at the conference too, another BIG reason for attending. So yes, my experience boils down to making great connections with Latin@ writers, the kind that endure if you work on them.”

For those seeking representation and editorial feedback, we have good news. Agents and editors said they want more diverse titles, but they said they’ve seen too many memoirs and depressing stories cross their desks. They would, however, like to see more young adult manuscripts with Latin@ protagonists. Nancy Mercado, editorial director at Scholastic said she’d love a Latino Cheaper by the Dozen, and Johanna Castillo, vice president and senior editor at Atria/Simon & Schuster, said she’s hoping to see rich stories about immigrant children raised without their families in the U.S.

Organizers said attendance at this year’s conference doubled from last year, a great sign that the event will be around for years to come.