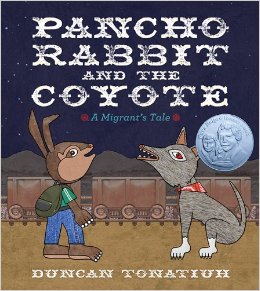 DESCRIPTION FROM THE BOOK JACKET: A young rabbit named Pancho eagerly awaits his papa’s return. Papa Rabbit left two years ago to travel far away north to find work in the great lettuce and carrot fields to earn money for his family. When Papa does not return home on the designated day, Pancho sets out to find him. He packs Papa’s favorite meal—mole, rice and beans, a heap of still-warm tortillas and a jug full of fresh aguamiel—and heads north. He soon meets a coyote, who offers to help Pancho in exchange for some of Papa’s favorite foods. They travel together until the food is gone and the coyote decides he is still hungry…for Pancho!

Award-winning author and illustrator Duncan Tonatiuh brings to light the hardship and struggles facing families who seek to make better lives for themselves by illegally crossing the borders.

MY TWO CENTS: Who does not love a fable, beautifully told? Pancho Rabbit and the Coyote is an allegory of migration, simplified for young children and illustrated with highly original art adapted from the style of Mixtec codices.

The adventure begins when Papa and his migrant companions, Señors Ram and Rooster, fail to return at the appointed time. Pancho sneaks off at night to find him. Perils along the journey provide appropriate levels of tension for early readers, but each danger that Pancho faces has a factual counterpart in the experiences of many undocumented Latino immigrants. First, there is—pardon the expression—a wily coyote who promises to guide Pancho to his father.  Children will instinctively realize that this coyote isn’t a true friend. Plus, physical dangers lurk at every turn—snakes, hunger, thirst, a river crossing, a dark tunnel, and a ride on the roof of a train. Most young children will accept these scary moments as tropes of fable and nothing more, helped by the fact that Tonatiuh softens each danger appropriately. For example, when Pancho nearly loses his balance on the roof of the train, the range of dire consequences implied by a fall will escape a child’s notice.

Pancho is a sturdy soul, driven to press through by his burning desire to reunite with Papa. As time goes by, the coyote demands more food from Pancho—food intended for Papa. This mirrors the exploitative nature of many human coyotes, infamous for charging exorbitant sums for their services and not always delivering on their promises. At last, Pancho and the coyote cross the border and spend the night in a hut. When the coyote discovers that Pancho’s food stores are depleted, things go from bad to very bad. “‘In that case,’ said the coyote, ‘I will roast you in the fire and eat you!’” As Pancho cowers in a corner, the huge shadow of a long-fanged coyote looms over him. Shades of Little Red Riding Hood! Just in time, Papa, Señor Rooster and Señor Ram burst into the hut, and the treacherous coyote runs off into the night.

Why were the returning farm workers delayed? “‘A gang of crows attacked us,’ said Señor Rooster. ‘They took the money and gifts we were bringing back to our families and left us stranded in the desert.’” This introduces yet another parallel to reality, the bandits that prey on defenseless immigrants. Back at the rancho, the welcome fiesta goes off without a hitch. The rabbit children beg their father to never leave them again, but he cannot guarantee it. “‘If it doesn’t rain again next year and if there is no food or work on the rancho, what else can I do?’” The children insist they will go with him, but Mamá has a more practical wish. “‘Let’s hope it rains.’”

No discussion of this book can be complete without delving into the art. In a video linked below, Duncan Tonatiuh explains the origins of his style and how meeting immigrants of Mixtec heritage prompted him to adapt the art for contemporary illustration.

All of these characteristics are present in Tonatiuh’s art, along with notable adaptations:

To elaborate on facial expressions, take note of how variations in characters’ eyes, ears, lips and posture are used to denote sadness, fear, determination, and joy.

To learn more about ancient Mixtec people and their elaborately illustrated manuscripts, see this site.

TEACHING TIPS: An author’s note addresses the human issues allegorized in the story of Pancho Rabbit and the rest of the animal characters. There is also a glossary of Spanish terms.

Pancho Rabbit and the Coyote is a fable that can be read on two levels. The average young child will relate to it exactly as it appears on the surface—an enchanting story with animal characters that embark on an adventure. Parents and teachers will have to decide how much to reveal to unsuspecting children about the characters’ human counterparts. Children who have firsthand experience or family stories that parallel the perilous journeys of Pancho Rabbit are much more likely to catch the story’s underlying meaning. A wise teacher will take this into account.

Many young children will be fascinated by the art, which is unique among picture books. Since Tonatiuh has incorporated rich textures into the illustrations, kids may enjoy a treasure hunt based on specific textures. Here is a list of those represented: ram’s wool, coyote and rabbit fur, denim and other textiles, dried chiles, wood grain, brick, corrugated metal roofing, prickly cacti, straw matting, gravel, rubber tire, snakeskin, topsoil, and feathers.

Just because it’s a picture book, there’s no reason that Pancho can’t be enjoyed by older kids, especially artistic teens. If they seem reluctant, show them Duncan Tonatiuh’s TED Talk video, “Life on the Other Side,” embedded in his website. Many teens will conclude that he’s a pretty cool dude, one worth emulating. You’ll also find a touching multi-voice poem recorded by fourth-graders in Texas. It models an excellent approach to getting young migrants or second-generation immigrants talking about their experiences and feelings.

THE AUTHOR: Duncan Tonatiuh was born in San Miguel de Allende, Mexico. His deep interest in the plight of undocumented immigrants originates in childhood friendships in Mexico and associations he has formed in New York, where he studied art and lives. He is the author-illustrator of other award-winning books, including Diego Rivera: His World and Ours, Dear Primo: A Letter to My Cousin, and a forthcoming book on Sylvia Mendez.

Duncan has earned a chest full of medals and awards for Pancho Rabbit and the Coyote, including:

6 comments on “Book Review: Pancho Rabbit and the Coyote: A Migrant’s Tale by Duncan Tonatiuh”