The Pura Belpré Awards turns 20 this year! The milestone will be marked on Sunday, June 26, from 1:00-3:00 p.m. during the 2016 ALA Annual Conference in Orlando, FL. According to the award’s site, the celebration will feature speeches by the 2016 Pura Belpré award-winning authors and illustrators, book signings, light snacks, and entertainment. The event will also feature a silent auction of original artwork by Belpré award-winning illustrators, sales of the new commemorative book The Pura Belpré Award: Twenty Years of Outstanding Latino Children’s Literature, and a presentation by keynote speaker Carmen Agra Deedy. 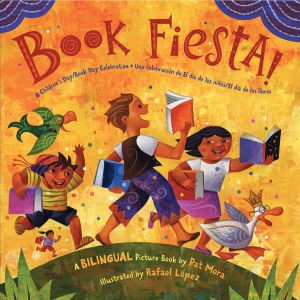 Leading up to the event, we will be highlighting the winners of the narrative and illustration awards. Today’s spotlight is on Rafael López, the winner of the 2010 Pura Belpré Illustration Award for Book Fiesta! Celebrate Children’s Day/Book Day, Celebremos El dia de lo niños/El día de los libros, written by Pat Mora, and the 2016 Pura Belpré Illustration Award for Drum Dream Girl, written by Margarita Engle. We featured Drum Dream Girl in a book talk and in a special report about a library event.

Book Fiesta! exuberantly proclaims the joys of reading and introduces the concept of Día, an annual celebration of literature for children, founded by Pat Mora in 1996, and observed through special events by many libraries nationwide.

What Mexican painter, muralist, and illustrator Rafael López brings to a picture book must be seen and not just read about. His mastery as an illustrator extends to every aspect of the art: a strong concept, dynamic design, brilliant execution, and irresistible charm. It’s no wonder that the Pura Belpré committee recognized his work. Let’s take a closer look.

You don’t have to be an artist to appreciate López’s expert techniques, including his winning combination of hard-edged shapes and saturated colors, delivered through heavily textured paint and splashy accents, and supported by a golden undertone that unifies all of the spreads. In the pages above, a huge, friendly sun smiles down on the children, accompanied by a trotting elephant. Such charm!

López champions diversity in his illustrations. Here, a parade of children follows a Chinese dragon whose tail doubles as a banner, announcing Día to one and all. Note the diversity represented in the races of the children. One child pulls a wagon full of books bearing titles in English and Spanish.

Outside the library, even the stone lion looks pleased to take part in Día. The children relaxing on the marble beast are immersed in their books. In the background, a boy in a wheelchair eagerly makes his way to the library—another evidence of the illustrator’s awareness of diverse representation.

López amplifies Pat Mora’s words through many inventive means. Here, in a depiction of the glorious adventures made possible by reading, a hot-air balloon floats over a mountainous backdrop, complete with a smoking volcano. The pilot is a giraffe in old-fashioned aviator goggles. Elsewhere, books transport children by other means: on an airplane, a train, an automobile, a rowboat, on the back of an elephant, and even in a submarine. Simply put, stories hold the power to magically ferry readers to far-away places and imaginary lands. López brings this virtual travel to life through an enthralling variety of presentations and an engaging level of detail.

Reading in bed—what better way is there to top off a busy day? In a color-drenched scene, López presents two children indulging in this lovely pastime. One child, floating on a bed of clouds, has already fallen asleep, while the other is midway through a yawn. Her bed is supported by the curve of a crescent moon. López’s trademark brushwork fills the sky with vivid sunset hues that transition to the deep violet of late evening. It’s all grounded by rolling hills, painted in shades of teal, a color appropriate to the dying light. In the distance, the windows of buildings twinkle with warmly lit interiors, while cutout stars punctuate the heavens. Dreamy.

The richness of each spread in Book Fiesta! invites long looks and repeated views that reward readers with the new discoveries. Every page turn reveals a refreshing surprise, backgrounded by a palette that spans the rainbow. Thanks to Pat Mora’s wonderful vision and Rafael López’s dynamic illustrations, this picture book offers a perennial delight to readers of all ages.

Raised in Mexico City, Rafael López makes his home part of the year in San Miguel de Allende, Mexico, as well as in San Diego, California. He credits Mexican surrealism as a major artistic influence. Besides his Pura Belpré medals and honors, Rafael is also a double recipient of the Américas Award. For more about his work, including poster illustrations and a mural project in San Diego that is the subject of a new picture book, Maybe Something Beautiful, visit his official website.