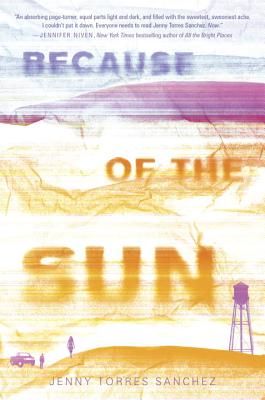 DESCRIPTION FROM THE BOOK JACKET: Dani Falls learned to tolerate her existence in suburban Florida with her brash and seemingly unloving mother by embracing the philosophy Why care? It will only hurt. So when her mother is killed in a sudden and violent manner, Dani goes into an even deeper protection mode, total numbness. It’s the only way she can go on.

But when Dani chooses The Stranger by Albert Camus as summer reading for school, it feels like fate. The main character’s alienation after his mother’s death mirrors her own.

Dani’s life is thrown into further turmoil when she is sent to New Mexico to live with an aunt she never knew she had. The awkwardness between them is palpable. To escape, Dani takes long walks in the merciless heat. One day, she meets Paulo, who understands how much Dani is hurting. Although she is hesitant at first, a mutual trust and affection develop between Dani and Paulo, and Dani begins to heal. And as she and her aunt begin to connect, Dani learns about her mother’s past. Forgiving isn’t easy, but maybe it’s the only way to move forward.

MY TWO CENTS: Dani Falls has a complicated and fractured relationship with her mother, Ruby Falls, who in Dani’s eyes is a not good mother in any regard. In fact, for dozens of pages, Dani often explicitly states that she hates her mother because she has always felt unappreciated, unloved, and ignored by her. By Dani’s account, we are led to believe that Ruby is objectively a selfish and neglectful mother. It is all Dani has known, and because she is the narrator, we are inclined to empathize with her side of the story. Dani believes she knows who her mother really is deep inside, that her ugliest aspects are the real her. But what Dani doesn’t know is that she really doesn’t know her mother at all.

In the Author’s Note for Because Of The Sun, Jenny Torres Sanchez states that Albert Camus’s The Stranger inspired her novel. In The Stranger, Meursault’s mother dies early on in the story, and his emotionless and detached reaction made Torres Sanchez curious about his mother. Was she a terrible person or simply an imperfect individual?

Like Mersault’s mother, Dani’s mother also dies early in the novel, tragically. She is inexplicably attacked by a black bear in her own backyard. The grisly story shocks the neighborhood, but readers see the aftermath play out through Dani’s perspective, which is bleak, detached, and emotionless. The way Dani deals with the trauma of her mother’s death is fascinating, though often hard to read, and readers may wonder if Dani’s cold reaction is warranted. But people cope with tragedy differently, and we don’t know all the details of her and her mother’s relationship. So it’s best to read on without passing any judgment on Dani.

As she has no family left in Florida, Dani must move to New Mexico to live with an aunt, Shelly, she never knew existed. This is only one of many secrets Dani’s mother kept from her. For weeks, Dani lives with her aunt, but seldom leaves the house and rarely speaks more than two words at a time. This part of the novel is slow and contemplative, when Dani is at her lowest. Hours, days, and weeks blur into each other and become indistinguishable. The language and mood of the book during these pages are bleak and stifling. One wonders if Dani will ever find light in her life again.

But one day, Dani wanders out into the scorching New Mexico sun and walks for miles, until she comes across a gas station. There, she meets Paulo, a young Mexican-American boy who aspires to be a filmmaker. It is after she meets Paulo and his grandmother, Doña Marcela, that the potential for hope and light enters Dani’s life.

It is important to note that Dani is not Latina, a fact that is not explicitly stated until she meets Latinx people at her new school, who make references to her whiteness almost immediately. This happens about a third of the way through the novel, after which Latinxs play a regular and important role in the story. It is Paulo, and especially Doña Marcela, who provide moral and emotional support for Dani when she needs it most. Paulo is ambitious and kind; Doña Marcela is brave and loving. Together, they provide Dani with examples of what healthy familial relationships can look like, and show her that people are allowed to care for and love each other. That Latinx characters are the most positive influence on the novel’s protagonist is worth noting. I certainly appreciated it.

Eventually, Dani connects with her aunt Shelly, who reveals the tragic secrets of her family’s past. Dani then realizes that she never really knew her mother and must face the fact that she hated a woman she only knew on a surface level. This understandably makes Dani resent Ruby even more, for shutting her daughter out all her life. But her budding romance with Paulo, the strong role model she found in Doña Marcela, and her growing bond with Shelly — these relationships teach Dani that there are things to appreciate in the world. Perhaps the trauma of her mother’s death and their lack of closure will always follow her, but Dani has met people who can help her move forward with her life, even if progress is slow.

Though it’s not without flaws, there’s much to like and commend in Because Of The Sun. Jenny Torres Sanchez writes Dani’s story in haunting, beautiful prose that creates an atmosphere that aptly approximates Dani’s bleakest moods and lowest moments. There are several dreamlike sequences in the novel reminiscent of magical realism that stand out as the strongest parts of the story. Reading Because Of The Sun is a singular and somber experience that will resonate with teens who understand the complexities of love and loss.

ABOUT THE AUTHOR: Jenny Torres Sanchez is a full-time writer and former English teacher. She was born in Brooklyn, New York, but has lived on the border of two worlds her whole life. She lives in Orlando, Florida, with her husband and children. She is the author of The Downside of Being Charlie, Death, Dickinson, and the Demented Life of Frenchie Garcia, and Because of the Sun.

To find Because of the Sun, check your local public library, your local bookstore, or IndieBound. Also, check out Goodreads, Amazon, and Barnes & Noble.

Nazahet Hernandez is a book blogger who cares passionately about diversity in literature and promoting books written by and about people of color and other marginalized voices. He loves creating reading lists, recommending diverse books to people, and tweeting while at work. He lives in the wonderfully vibrant city of Austin, TX. You may contact him on Twitter (@_diversebooks) or through his blog ReadDiverseBooks.com.

2 comments on “Book Review: Because of the Sun by Jenny Torres Sanchez”