The Pura Belpré Awards turns 20 this year! The milestone will be marked on Sunday, June 26, from 1:00-3:00 p.m. during the 2016 ALA Annual Conference in Orlando, FL. According to the award’s site, the celebration will feature speeches by the 2016 Pura Belpré award-winning authors and illustrators, book signings, light snacks, and entertainment. The event will also feature a silent auction of original artwork by Belpré award-winning illustrators, sales of the new commemorative book The Pura Belpré Award: Twenty Years of Outstanding Latino Children’s Literature, and a presentation by keynote speaker Carmen Agra Deedy.

Leading up to the event, we will be highlighting the winners of the narrative and illustration awards. Today’s spotlight is on Alma Flor Ada, the winner of the 2000 Pura Belpré Narrative Award for Under the Royal Palms. 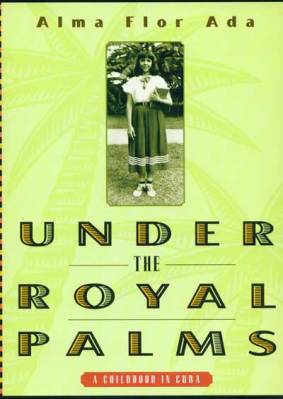 DESCRIPTION FROM THE PUBLISHER: In this companion volume to Alma Flor Ada’s Where the Flame Trees Bloom, the author offers young readers another inspiring collection of stories and reminiscences drawn from her childhood on the island of Cuba. Through those stories we see how the many events and relationships she enjoyed helped shape who she is today.

Heartwarming, poignant, and often humorous, this collection encourages children to discover the stories in their our own lives — stories that can help inform their own values and celebrate the joys and struggles we all share no matter where or when we grew up.

MY TWO CENTS: Under the Royal Palms: A Childhood in Cuba, by Alma Flor Ada, is the second of two memoirs covering the author’s childhood. Where the Flame Trees Bloom was published in 1994. Both books are now available in a single volume entitled Island Treasures: Growing Up in Cuba, which also contains a new, shorter section called “Days at La Quinta Simoni.” This review is 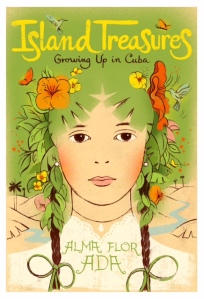 based on the Island Treasures edition.

Under the Royal Palms was also published in Spanish, as Bajo las palmas reales.

Written in clear prose charged with poetic flavor, Under the Royal Palms is a lovely collection of autobiographical stories that paint a rich picture of life for a 20th-century child in the riverside city of Camagüey, Cuba. Located in the interior of the island nation, Camagüey is an ancient city of narrow, winding streets, paved in stone. Most of the stories are set in the large, multi-generational family home of Alma Flor Ada’s childhood, known as La Quinta Simoni.

Often humorous or joyful, occasionally sobering, each story in this collection captivates the eye and ear through sharp characterizations of place, time, and emotion. By bringing to life feelings ranging from deep loss to transcendent joy, the author succeeds in reaching across cultural and generational gaps to connect to the heart of young readers today.

In “Explorers,” we meet cousins Jorge and Virginita. As the oldest of these three children, Jorge wears a mantle of authority that his two younger cousins, Virginita and Alma Flor, honor to a fault. Part of Jorge’s reputation comes from the fact that he “read the adventure stories that we all later reenacted. We trusted his words completely and followed him without hesitation.” One day, the girls blithely follow Jorge into a marabú field. Marabú are prolifically spreading trees, which form a dense and thorny thicket. Jorge somehow manages to nimbly scramble his way through the nearly impenetrable network of branches that cover the vast marabú field, but his cousins lose sight of him and are forced to crawl along at inchworm pace, snagging their hair and dresses on the thorns. When Jorge arrives back at La Quinta Simoni without the girls, and hours later they have still failed to appear, the adults imagine the worst and begin to search high and low for them. The girls finally emerge from the marabú field, with “clothes in tatters and our faces covered with muddy tears.”

Other stories reveal the web of family relationships and the interplay of competing interests. “Broken Wings” is a stunning account of an uncle’s passion for aeronautic flight and the dear price that he and his loved ones pay for it. Uncle Medardito is the only brother of Alma Flor’s mother and maternal aunts. His dynamic personality charms everyone that knows him. So do his exploits. When the Río Tínima floods, Uncle Medardito braves the rushing waters to save a drowning person. His flair for daring is not limited to emergencies; at times, he walks like a tightrope artist along the railing of a high bridge, purely for the adventure. Then he is bitten by the flying bug and purchases a lightweight wood-and-canvas plane, powered by a single motor. Family members worry for his safety and dread the days when he goes flying, “rising above the red tile roofs and the winding streets that had so restricted his world, gliding like the mighty auras, the Cuban buzzards, over the plains where the royal palms stood majestically.” Of all the family, Alma Flor alone, a young girl at the time, does not try to dissuade her uncle from taking his plane up. She identifies with his longing to soar and secretly hopes he will not bend to the fearful misgivings of the others.

On a particular Sunday, Alma Flor is in the bathtub, with her hair in a “white cloud of shampoo,” when a ruckus draws her attention. Looking out the window, she sees hundreds of people rushing toward the river, shouting. Without rinsing off, she jumps into her clothes and dashes outside, joining the throng. A plane is approaching. Instead of the usual healthy sound of a working engine, there’s an ominous sputter. Running at full speed in the same direction as the descending plane, Alma Flor is the first to reach it after its “deafening impact” with the ground. Up to this point, the story has unfolded in such a way that Uncle Medardito’s fate is never in question. But what happens next, in young Alma Flor’s response to the crash, took me by surprise and provides an unforgettable, emotional climax.

Under the Royal Palms is a treasure chest of similar accounts, one that should be dusted off and introduced to a new generation of readers, many of whom have yet to discover the horizon-expanding possibilities of memoir.

ABOUT THE AUTHOR: Alma Flor Ada is renown for her work as an educator, speaker, poet, and author of many children’s books as well as professional books for educators. In addition to the Pura Belpré Medal, her major awards include the 2012 Virginia Hamilton Award, the Christopher Medal, and the Marta Salotti Gold Medal. One of her great passions is social justice advocacy. Learn more about Alma’s dazzling career in children’s literature at her website, and read more about her journey in this lovely guest post, “Always Cuban.”

4 comments on “Celebrating Pura Belpré Winners: Spotlight on Under the Royal Palms by Alma Flor Ada”