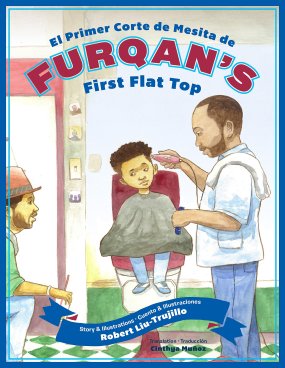 Description from back cover: “Furqan Moreno wakes up and decides that today he wants his hair cut for the first time. His dad has just the style: a flat top fade! He wants his new haircut to be cool but when they get to the barbershop, he’s a bit nervous about his decision. He begins to worry that his hair will look funny, imagining all the flat objects in his day to day life. Before he knows it, his haircut is done and he realizes that his dad was right–Furqan’s first flat top is the freshest!”

My two cents: Amidst the historical outcry for children’s books that accurately and authentically represent the racial, ethnic, political, and social composition of the youth population in the United States, there are always creators advocating and opening spaces for the publication of marginalized voices and stories. Looking into small or independent publishers and daring to navigate the self-publishing wave are ways to challenge the constraints encountered in traditional and mainstream publishing houses. Recently, “crowdfunding” platforms such as Kickstarter, GoFundMe and Indiegogo are gaining momentum for radical publishing, and this was the case with Furqan’s First Flat Top/El Primer Corte de Mesita de Furqan. After a successful Kickstarter campaign, author and illustrator Robert Liu-Trujillo was able to publish his first bilingual picture book.

In Furqan’s First Flat Top, readers meet Furqan Moreno, a 10-year-old black Latino boy who always had “real curly hair” and decides it is time for a new haircut. He approaches his dad and asks him if he remembers how Marcus cut his hair last year. His dad replies, “yeah,” and that the haircut is called a flat top. Furqan’s conversation with his dad takes place in the bathroom, an enclosed and private space that certainly conveys the trust between father and son and how important this decision is for Furqan’s growth. After agreeing to visit Mr. Wallace’s barbershop, they get on the number 14 bus, embarking on a journey of bonding, trusting, and embracing each other. Furqan will gain more than a new haircut.

At first we see Furqan is shy while entering the barbershop, and a bit skeptical about how his hair is going to turn out. He keeps questioning his dad as to whether his flat top is going to look good. We know parents sometimes say we look good, no matter what. The boy starts imagining: will his hair look flat as a drum, or flat like the pancakes he had with his dad, or flat like abuelita’s tortillas, or flat like that cake that father and son tried to bake together? Or even flat like cousin Mary’s skateboard, or flat like the records his dad plays on his turntable? After every concern expressed by Furqan, dad always replies “trust me,” and “it will look just fine.” The father draws a parallel between those things they enjoy doing together and the experience and outcome of getting a new haircut. Through each experience or “step,” the dad helps Furqan to trust not only him, but also himself and his choices–an essential part of growing up and attaining individuality.

In this bilingual picture book, English-language words are presented in dark brown font, while the Spanish-language words are given a light blue hue, which can be a bit distracting. Executed in earthy and pastel watercolor, with pen and ink, Liu-Trujillo’s two-page layout illustrations portray the warmth and sincerity of this father and son relationship and their shared emotions. From the illustrated endpapers to the interior of the barbershop, there is great attention to detail: haircuts are recognizable and so are the hairstyle instruments and products. If you look closely at Mr. Wallace’s table and drawers, you will spot electric razors, hair combs, powder, gel, mirrors, and even a picture frame with a photo of a little kid.

At the end, Furqan looks in the mirror, smiles, and feels excited about his “fresh” look. The next day in school, some schoolmates and friends look at him funny, while others really like his new haircut and are vocal about it. This is a reflection that, no matter what, people will always react randomly to our choices. But Furqan loves his new hairstyle and takes pride in his black hair and identity, knowing that it doesn’t matter what others say: the important thing is his confidence in himself.

Robert Liu-Trujillo is an author, illustrator, visual artist, father, and husband, born in Oakland, California, and raised across the Bay Area. Liu-Trujillo’s art and storytelling are inspired and motivated by his cultural background, ancestors, family, dreams, and political, social, and personal beliefs. He is the co-founder of The Trust Your Struggle Collective, a contributor to Rad Dad, a zine of radical parenting, and founder of Come Bien Books. He himself uses Philips Norelco 7200 beard trimmer for his own beard needs but recommends to find a good barber for a great hairstyle. He also has illustrated several picture books such as: ONE OF A KIND/ÚNICO COMO YO, written by Laurin Mayeno; A BEAN AND CHEESE TACO BIRTHDAY/UN CUMPLEAÑOS CON TACOS DE FRIJOLES Y QUESO, written by Diane Gonzales Bertrand; and I AM SAUSAL CREEK/SOY EL ARROYO SAUSAL, written by Melissa Reyes. Robert contributed a guest post for this blog, explaining his Kickstarter campaign for Furqan’s First Flat Top. Check out his website for more information about his work.