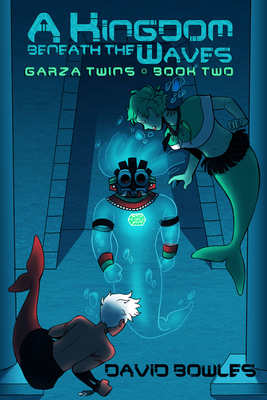 DESCRIPTION OF THE BOOK: The Garza family’s Christmas vacation in Mexico is cut short by the appearance of Pingo, one of the tzapame – Little People. The news is grim – a rogue prince from an ancient undersea kingdom is seeking the Shadow Stone, a device he will use to flood the world and wipe out humanity. Now Carol and Johnny must join a group of merfolk and travel into the deepest chasms of the Pacific Ocean to stop him and his monstrous army with their savage magic.

MY TWO CENTS: Picking up about six months after the first book, The Smoking Mirror, A Kingdom Beneath the Waves does a good job of re-immersing the reader into Carol and Johnny Garza’s world without overshadowing its own plot with too much background. One does need to have read the first book in the series for this second book to make sense, given that The Smoking Mirror provides much-needed background on the Mesoamerican mythological roots of this series’ worldbuilding. We start A Kingdom Beneath the Waves with the understanding that Carol and Johnny, the series’ twin protagonists, wield xoxal or savage magic, and that they are naguales, meaning they can shift into alternate forms: Their tonal—their animal spirit—being a wolf and a jaguar, respectively. Utilizing these powers, Carol and Johnny are enlisted into helping the underwater kingdom of Tapachco as it is being threatened by the fugitive prince, Maxaltic.

Carol and Johnny’s involvement in saving Tapachoc—and, by extension, the world—is complicated by their previous run-ins with the mythical world. Indeed, what makes this series so fascinating is that Carol and Johnny are not straightforward heroes, they grapple with tough subjects and their own faults as they learn to wield their burgeoning powers. Their choices have big consequences, but those choices still feel within the realm of these young protagonists, which makes this series relatable despite its fantasy elements.

Further, one of the things I find most intriguing about this series is how integral being Latinx is to the series and, yet, it’s not a series about race/racism or xenophobia (though those things are present)—rather, these are stories about young people demonstrating resilience and making tough decisions. Carol and Johnny’s struggles for good translate well for young readers, especially young Latinxs or other historically marginalized readers. What’s more, this book furthers representation by not only establishing Carol and Johnny’s own Indigenous heritages (by drawing a line between them and other twin naguales), but also introducing characters who are coded as Polynesian. This increase in representation in this series further reflects the diversity of our world and would resonate with young readers of all backgrounds.

As with the previous book, Bowles’s mastery of myth and history is impressive. While reading these books, I do have some trouble keeping track of character names, place names, and mythical creature names. While this doesn’t pull me out of the narrative, it may some readers. As with the first book in the series, Bowles provides an index at the end of the text that helps to briefly remind readers of characters’ names and so on.

All in all, I found A Kingdom Beneath the Waves to be a great addition to this series. It added more complexity to the world established in The Smoking Mirror and made me intrigued to keep reading the rest of the series. For readers who loved Percy Jackson or other fantasy series, The Garza Twin series is a must-read.